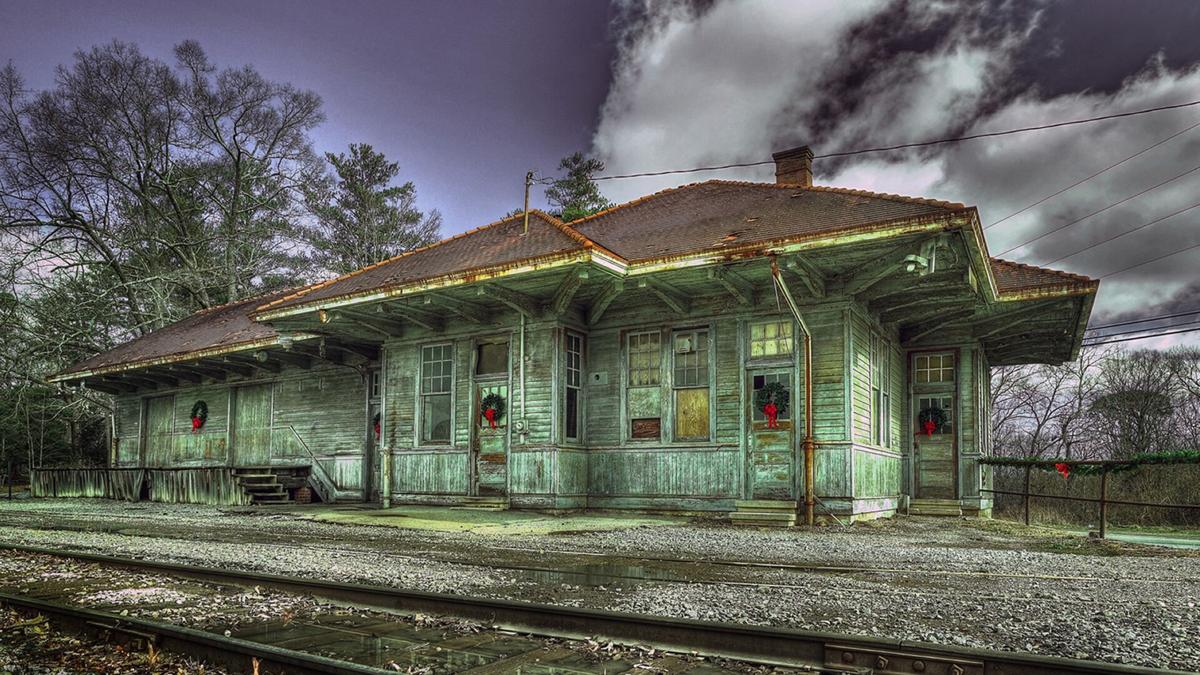 Tate depot in its original location for 99 years. 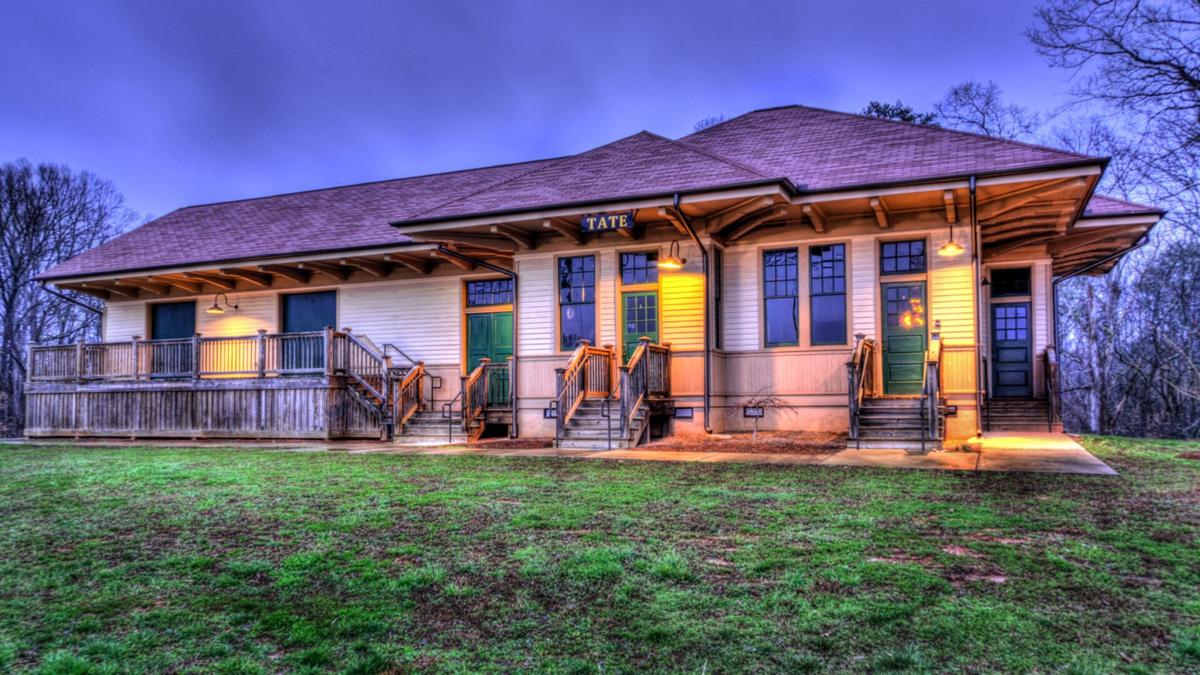 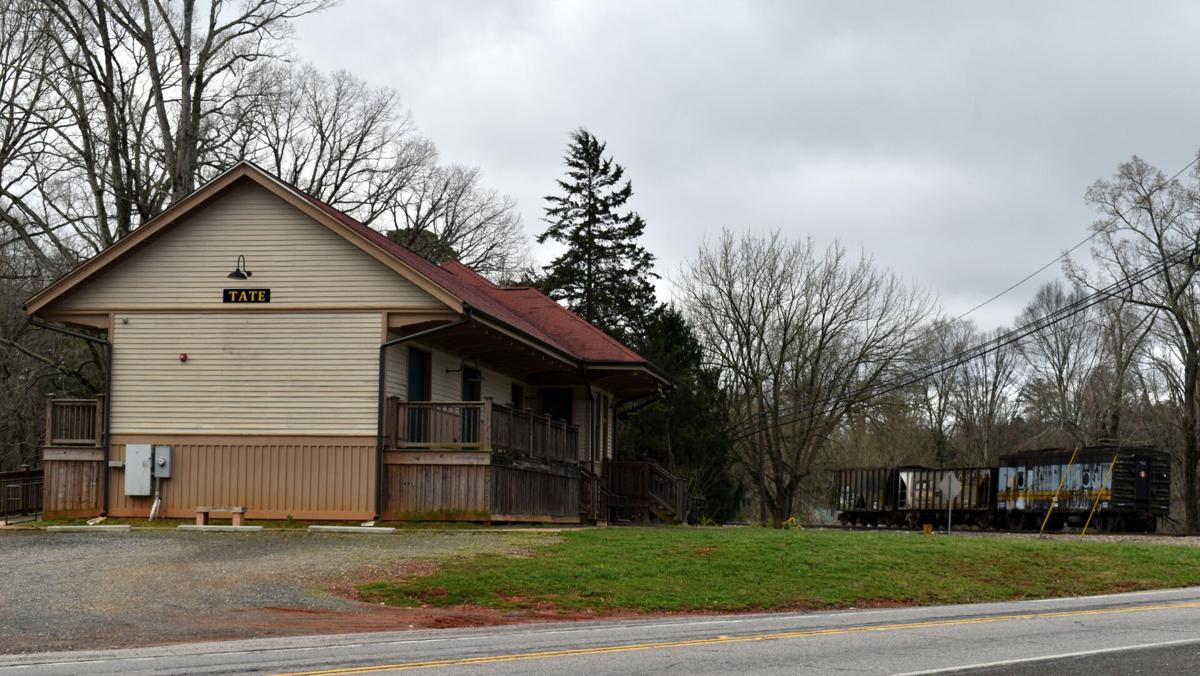 Tate depot faces the railroad tracks with Highway 53 in the foreground. 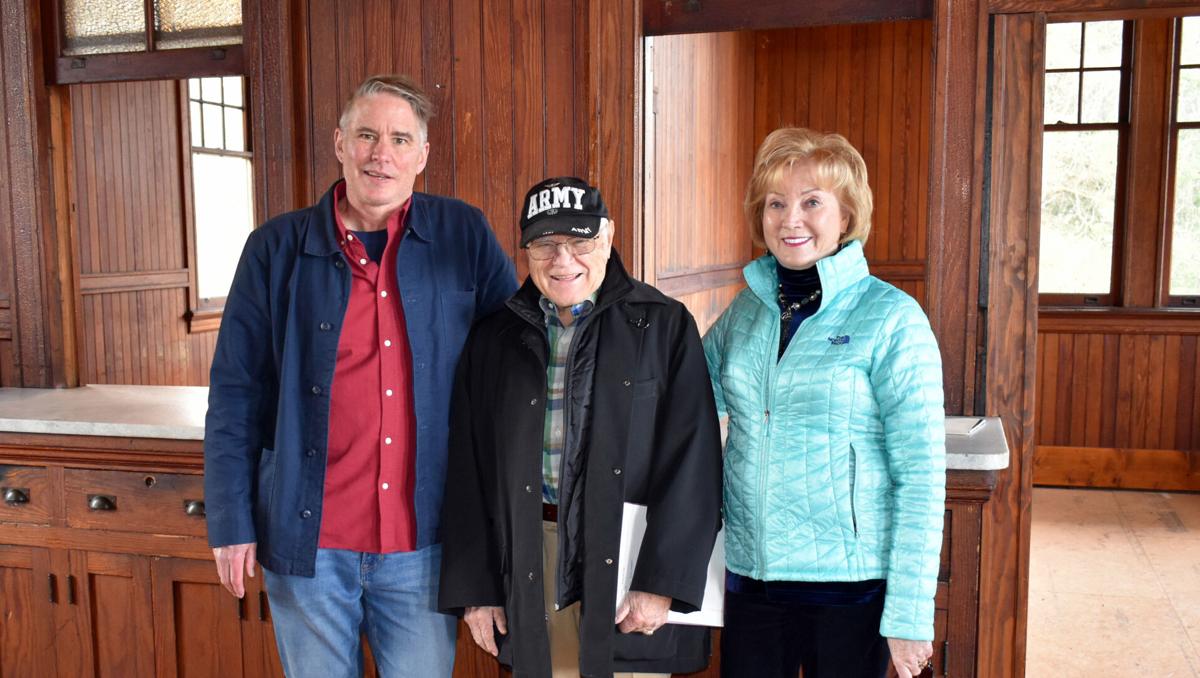 John Anderson, Bill Gibson and Becky Denny in front of the ticket counter inside the Tate depot. 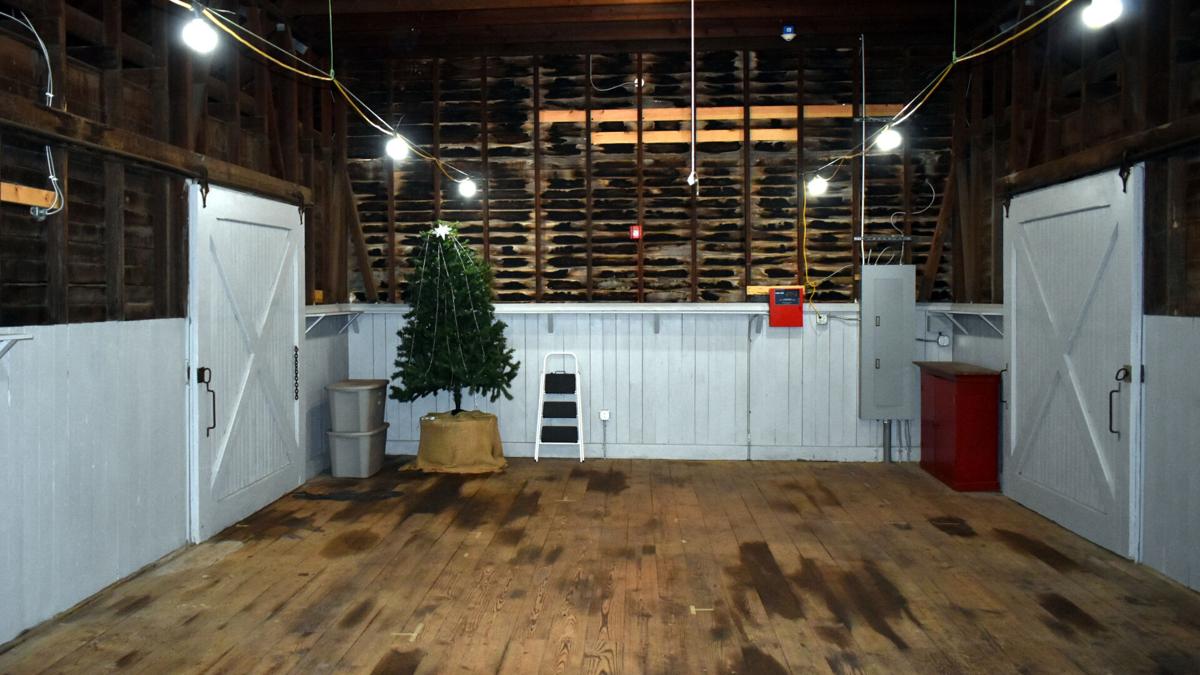 The freight area is now a large open area where Bill Gibson’s train layout will be located. 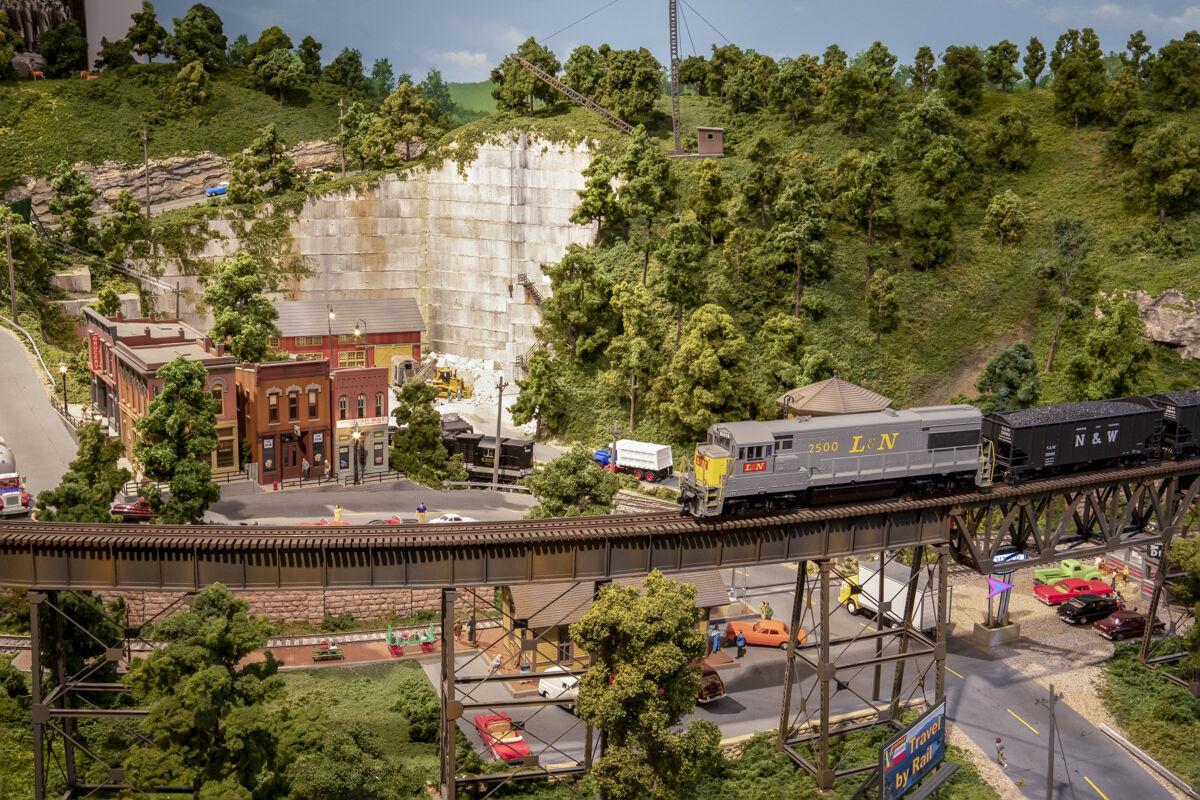 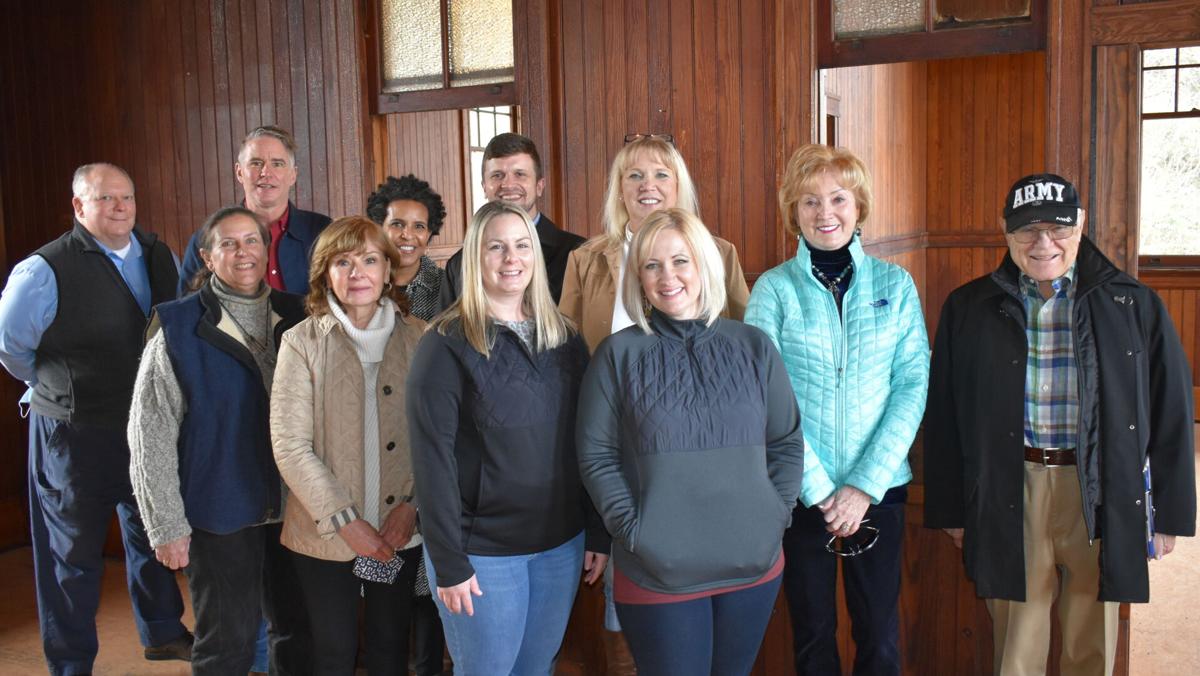 John has organized a large team to work on the Tate Historic Committee.

If you had driven along Highway 53 near Tate any time before 2015, you would have passed a weathered and worn train depot sitting beside the track at the crossing.  If you looked closely as you passed by the end of the building you probably wondered why the building was so close to the road and why the roof edge reached over the roadway.  This is just one of the reasons for moving the depot—to get it away from the road.

The road was completely different when the Tate Depot was constructed in 1916 to serve the town of Tate, located to the north of the depot. Tate was a company town for the Georgia Marble Company founded by Samuel Tate in 1884.  When passenger service was terminated in the 1940s the L&N Railroad (which subsequently became CSX) turned the depot into a storage area.

In April 2015, the depot was moved across Highway 53 to its present location beside the tracks of the Georgia Northeastern Railroad (GNRR), which operates between Marietta and Blue Ridge five days a week to deliver freight.

Many people who drive by the depot on a regular basis wonder what has been going on with the depot since its move. The short answer is occasional craft fairs and historic tours, but mostly it is locked up.  The parking lot was constructed behind the depot sometime after the move, but other than seasonal decorations placed in front of the building little has been done inside because of a lack of funds.

This is going to change, according to Becky Denny, Big Canoe property owner and Eastern District Pickens County Commissioner. The Pickens County Commission has established a stewardship committee for the Tate Historic District. “We have appointed John Anderson as the executive director of the Tate Historic Committee,” said Denny. “The county is excited about this project!  John is the perfect person to head up this committee, and we are grateful for his vast knowledge and expertise in this field.”

“The depot is not intended to be a museum,” said Anderson, a resident of Big Canoe. “The Committee has come to agreement that the depot is to be an event and meeting venue that compliments the businesses in the Tate Commercial District,” he continued. This district includes the Beauty Bar, Bell’s Pharmacy and other businesses located nearby. “The most important priority for the depot is that it becomes economically self-sufficient beyond grants and donations,” Anderson said.

In a recent Smoke Signals Weekly article about Big Canoe resident Bill Gibson’s HO Scale model train layout, Gibson said, “Susan and I recently announced we have decided to donate our model train layout to the Tate Depot so it can be enjoyed by others.”  Efforts are currently underway by Gibson and the Tate Historic Committee to make this a near-term reality.

Anderson and Denny convened a meeting at the Tate Depot on March 19 to bring many of those who will be involved in this startup project together for introductions and to see the inside of the depot, some for the first time.

“This is my second visit to see the inside of the depot and see where my model train layout will be located,” Gibson said.  The planned location is the end of the building nearest the highway, which is a large open area where freight was moved from trucks to the trains, as shown in the photo below.

All of us look forward to seeing Bill Gibson’s detailed layout installed in the depot, which prominently features the Georgia Marble company quarry.  “I’m in discussion with Steve Worack from Chicago, who designed and built the layout, to move it from my house and install it in the depot,” said Gibson. “Obviously, John and his team have a lot of work to do before that can happen.”

“The building does need a lot of work to get it ready before the layout can be installed,” said Anderson.  “It is uninsulated and without heat and restrooms. Tackling these issues will be high on our priority list.”

Others present at the meeting included committee members and individuals from other organizations who will be working with Anderson and Denny to return the depot to its former status as a vibrant center of the Tate Community. Everyone is shown in the group photo below.

“To support establishing the depot as a sustainable event venue, we have identified four attractions or programs to enhance the economic appeal,” said Anderson. “These include two model train exhibits, a Kennesaw State University(KSU) ‘History of Tate and the marble industry exhibit, a K-12 engagement for the KSU exhibits and finally training programs, one for STEM (Science, Technology, Engineering and Math) using the model trains and another for trades using marble-related crafts.  These last two training programs are proposed in partnership with the Boys & Girls Club of North Georgia,” said Anderson.

“We hope to have exhibits and other ‘welcome’ type activities ready for Jeep Fest and then Marble Fest in the fall of 2021, using the depot as it currently is,” he added. “By early 2022 we hope to have raised funds to install restrooms and kitchen infrastructure and heating and air conditioning in the depot.” Anderson added that “all improvements will be made in a manner respectful of the historic character of the depot and the surrounding historic district.”

“In the longer term, as the Depot becomes self-sustaining, we hope to move forward with restoring other historic resources to enhance the entire National Historic Register Georgia Marble Company and Tate Historic District,” he said.

All of us wish Anderson and the Tate Historic Committee the absolute best towards a successful outcome and hope to visit Bill Gibson’s train layout at the Tate Depot in the near future. Anderson has asked that anyone desiring more information contact him through his e-mail address at jrando7102@outlook.com.