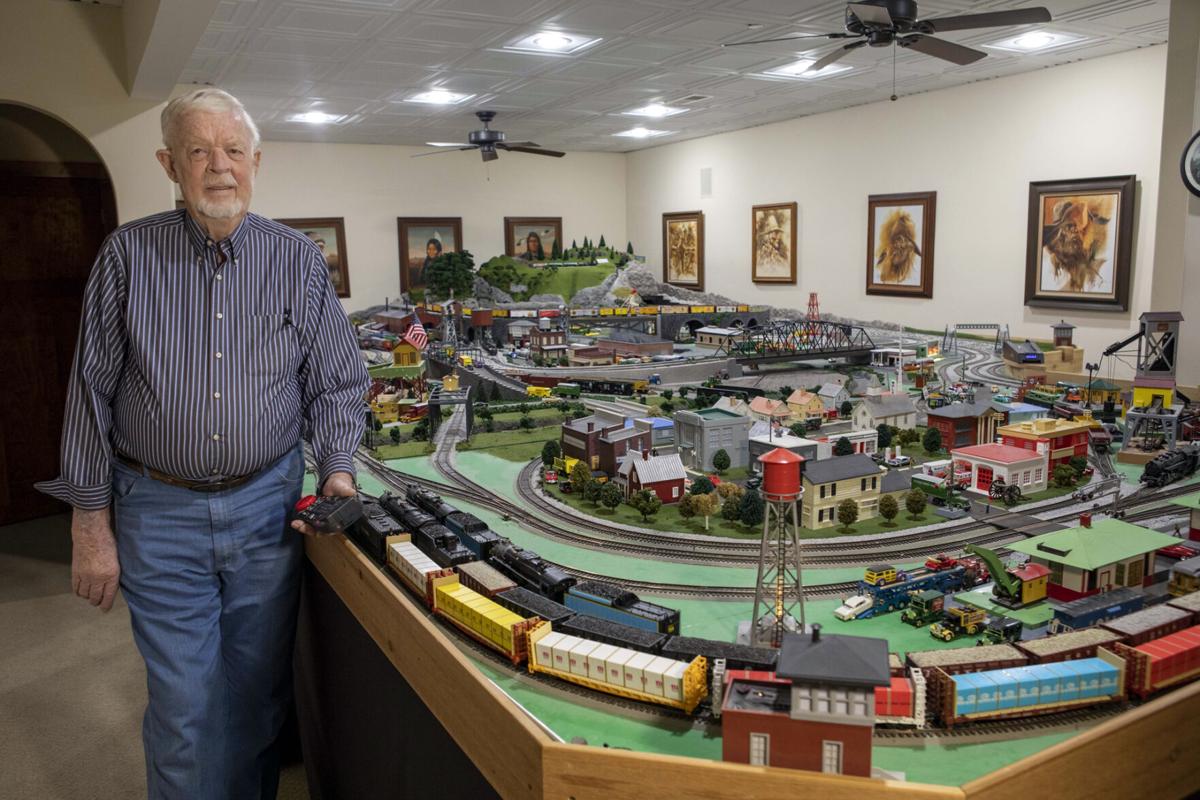 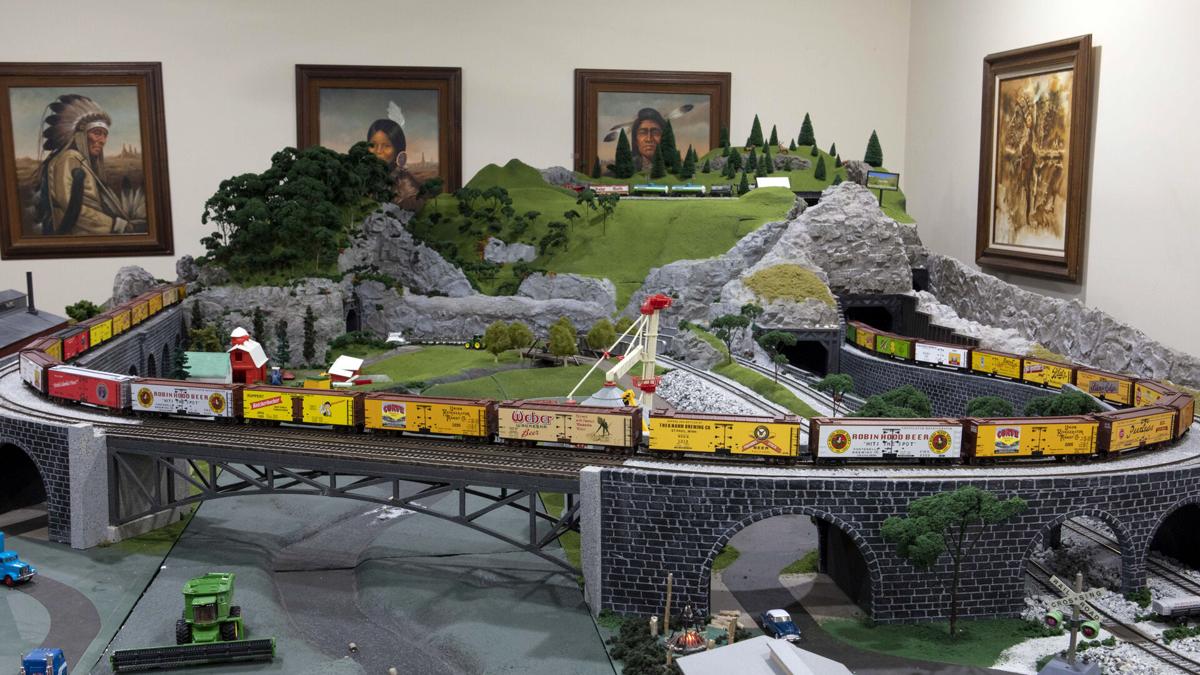 Elevated section of tracks one and two crossing the river. The train consists of 33 cars with different Beer Company logos 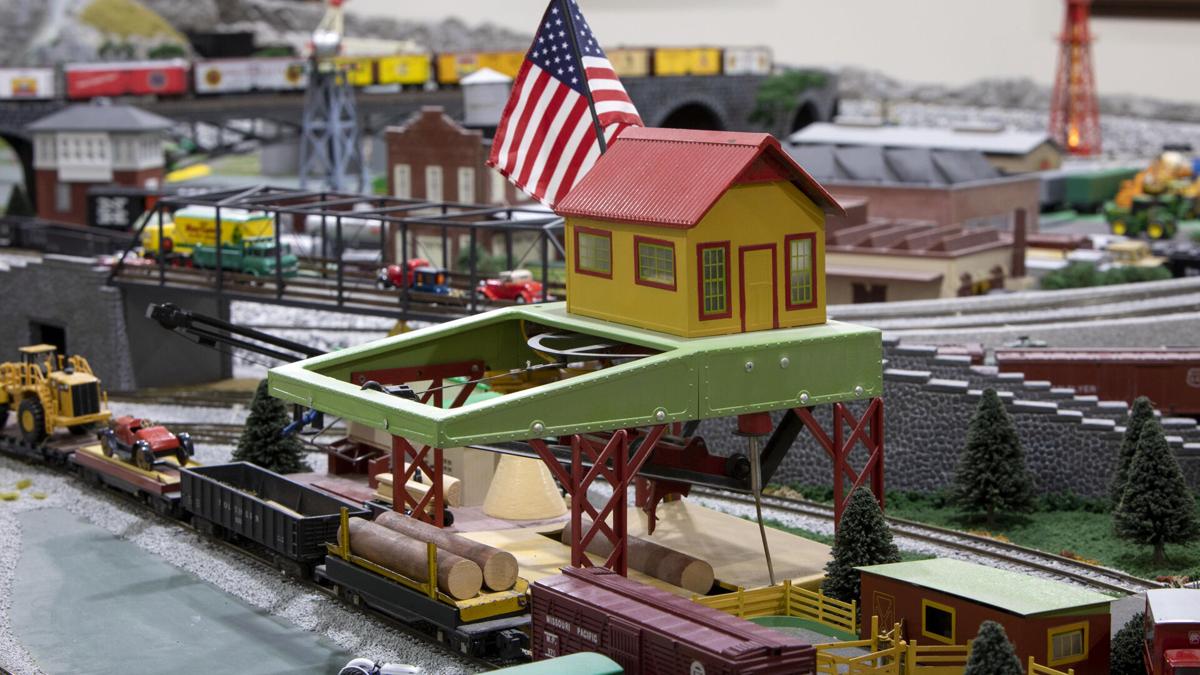 Original American Flyer log loader with a stock yards accessory on the near side. 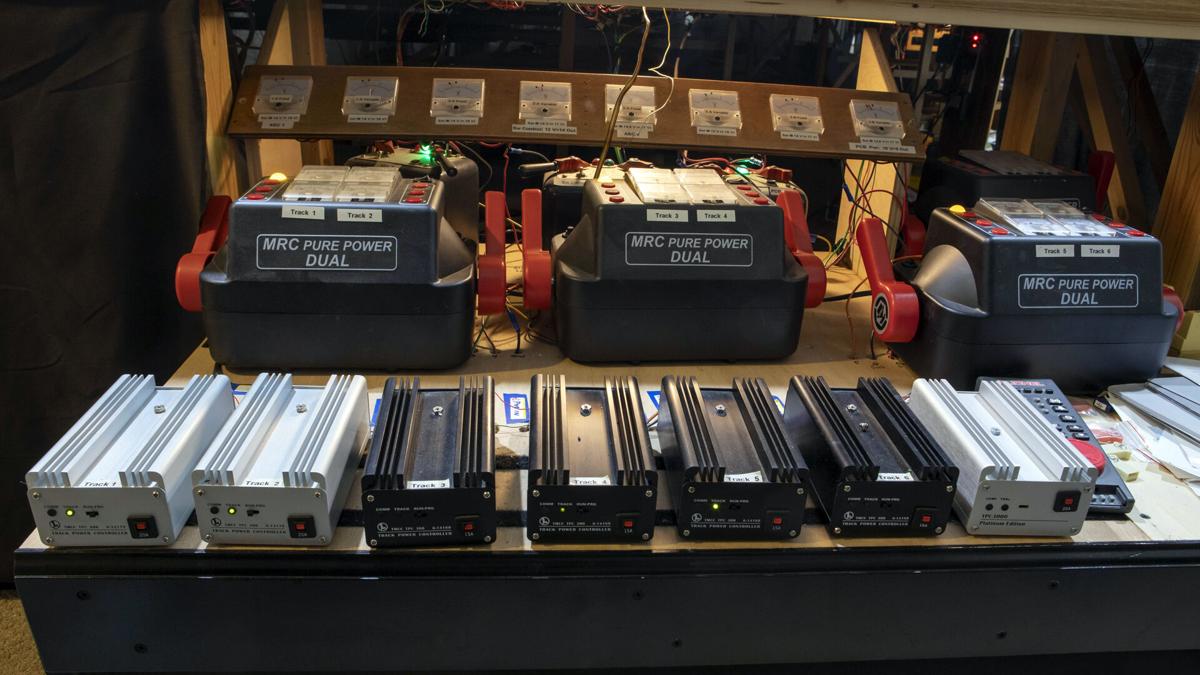 Power for all tracks and accessories is provided by seven dual-channel transformers. 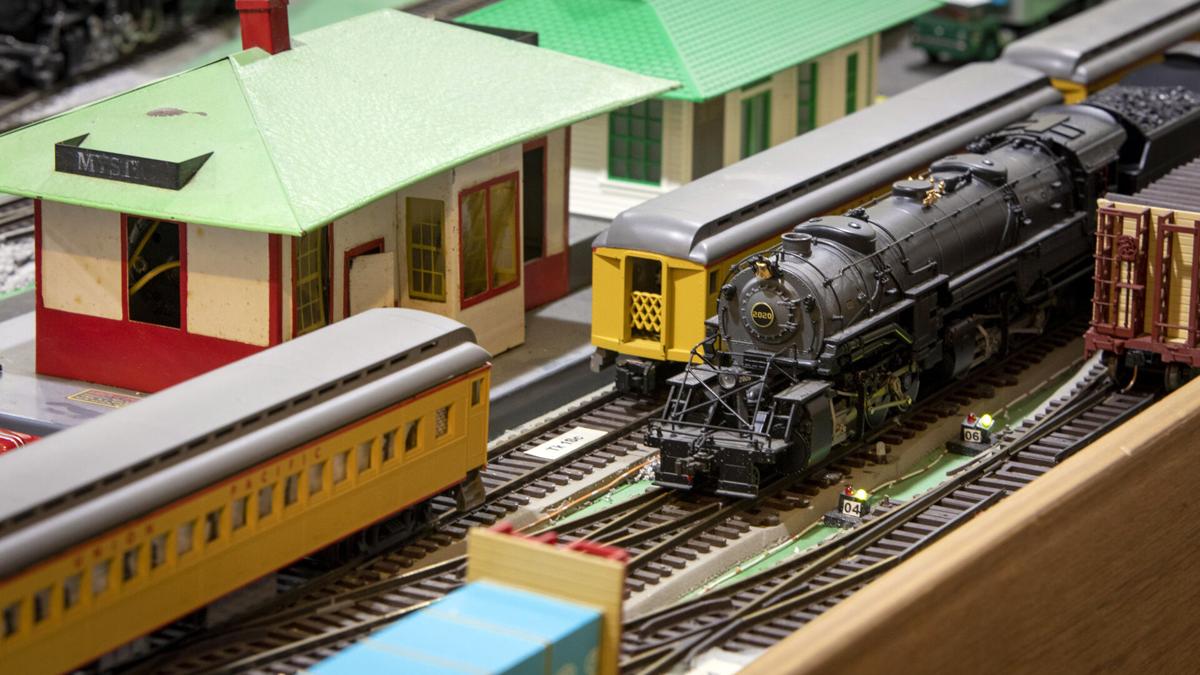 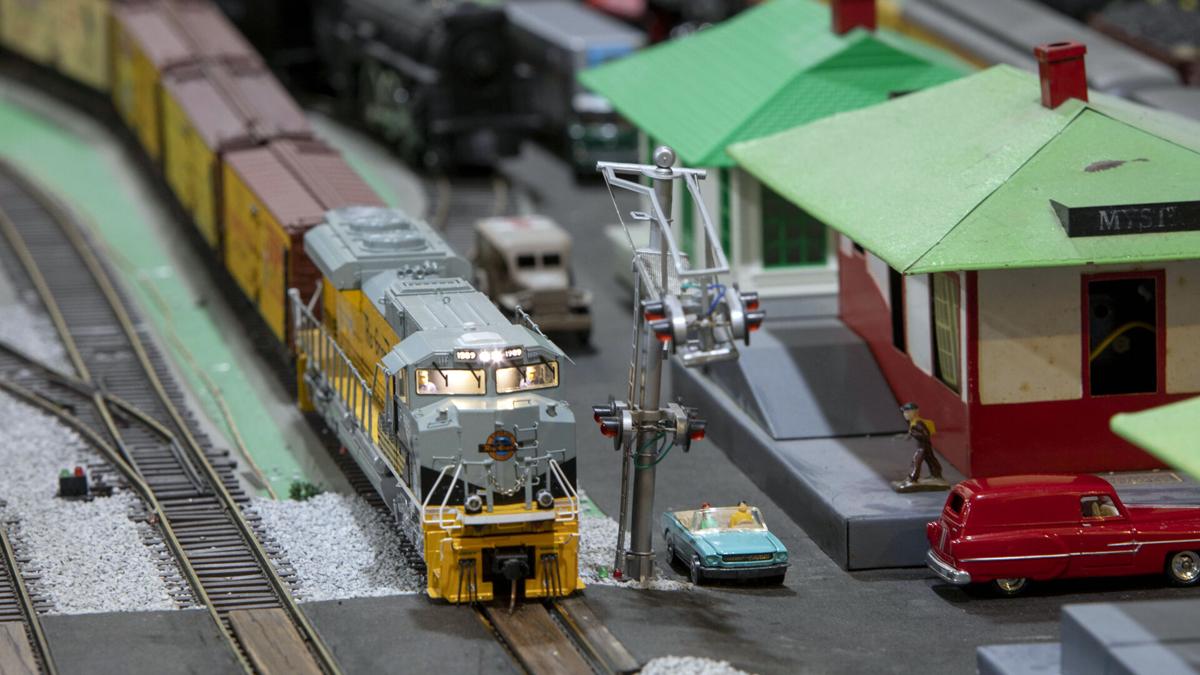 Modern diesel engine powered freight train on track two passes the inside of the freight depot. 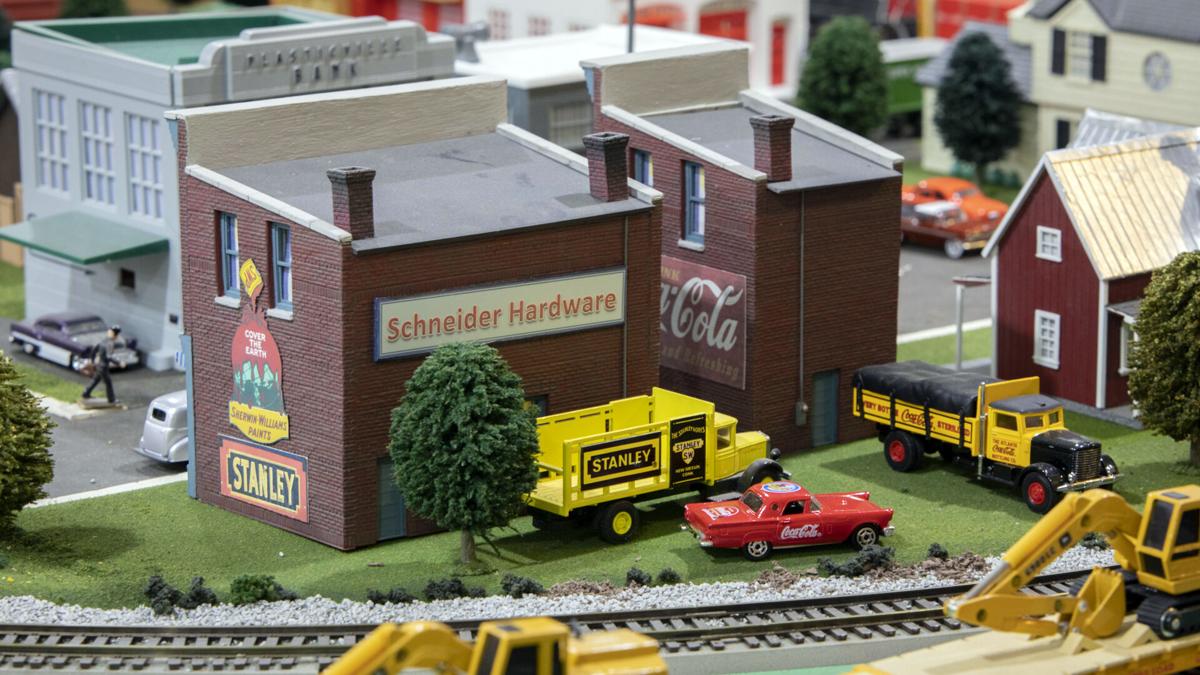 The Schneider hardware and Jasper Drug stores sit beside the railroad tracks where a train loaded with construction equipment passes by. 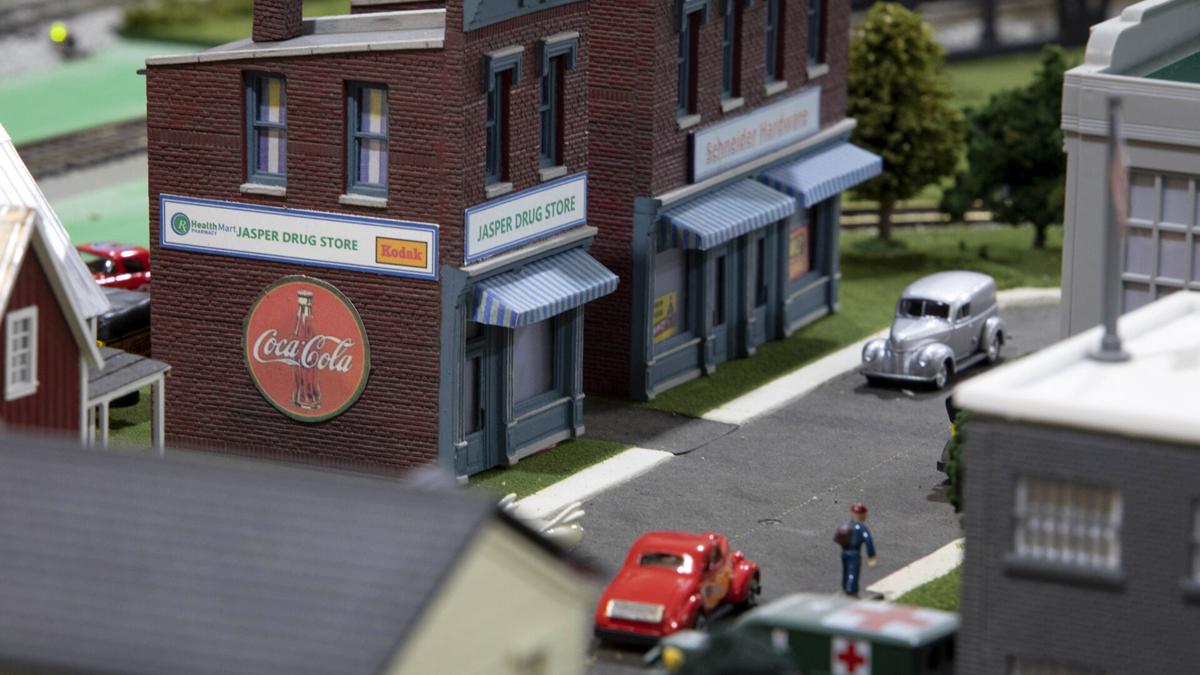 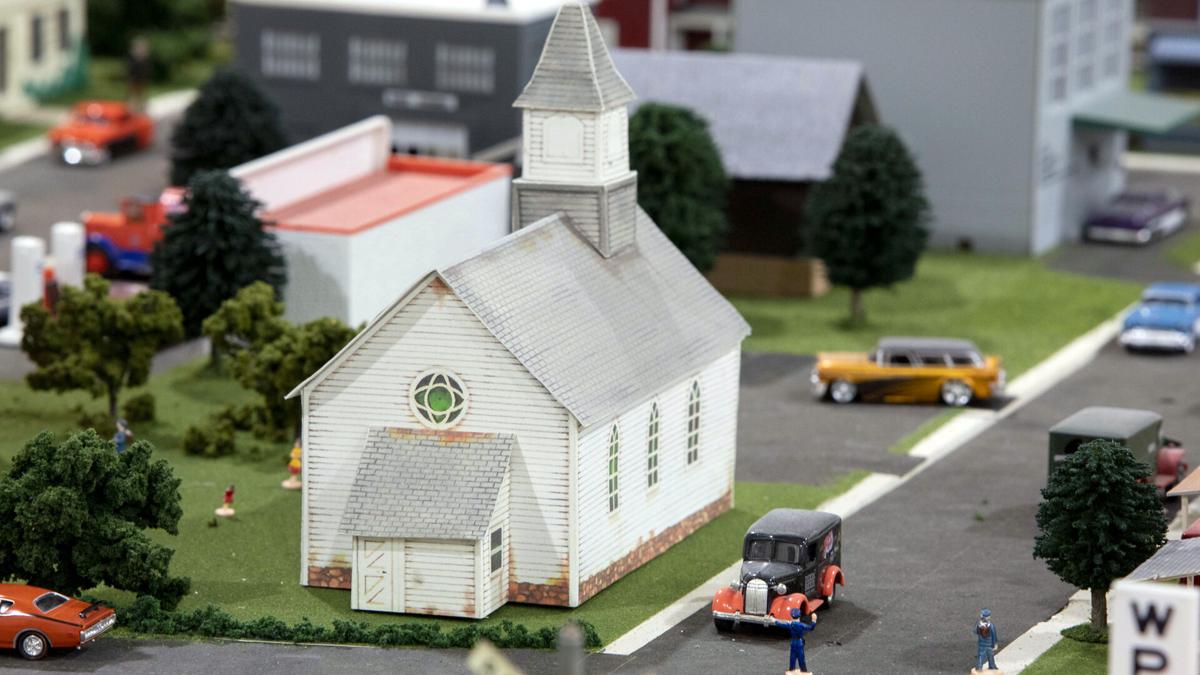 The town church is at a busy corner of town across the street from the tracks. 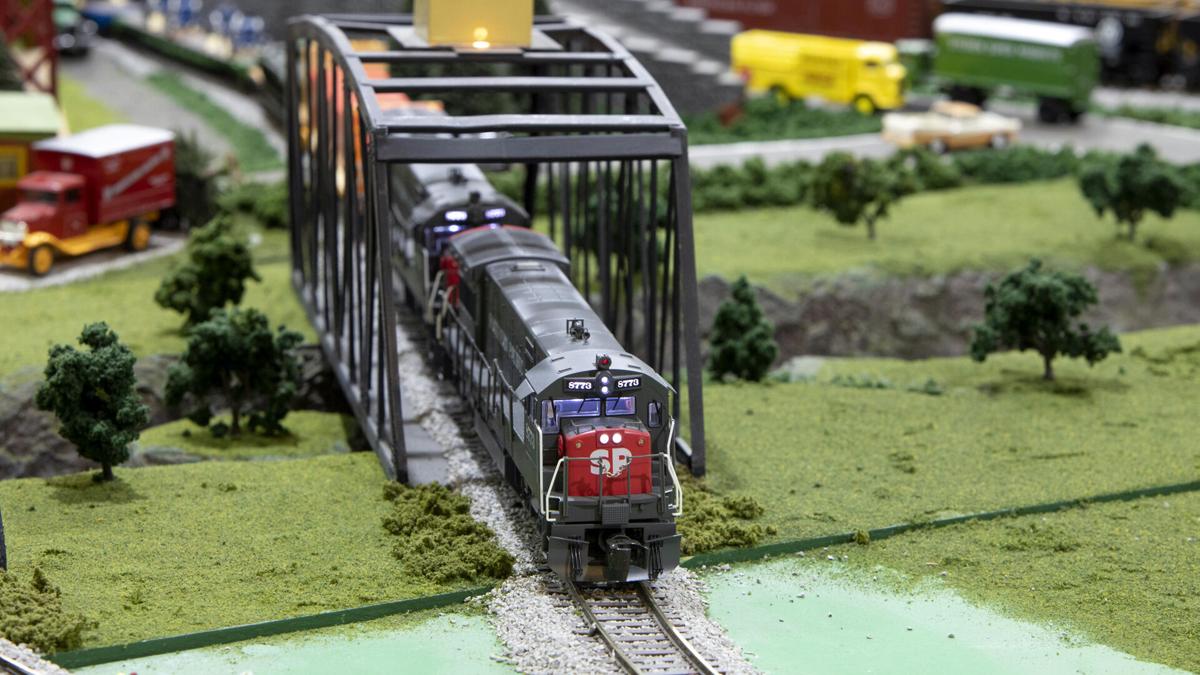 A freight train pulled by twin diesel engines crosses the bridge into town. 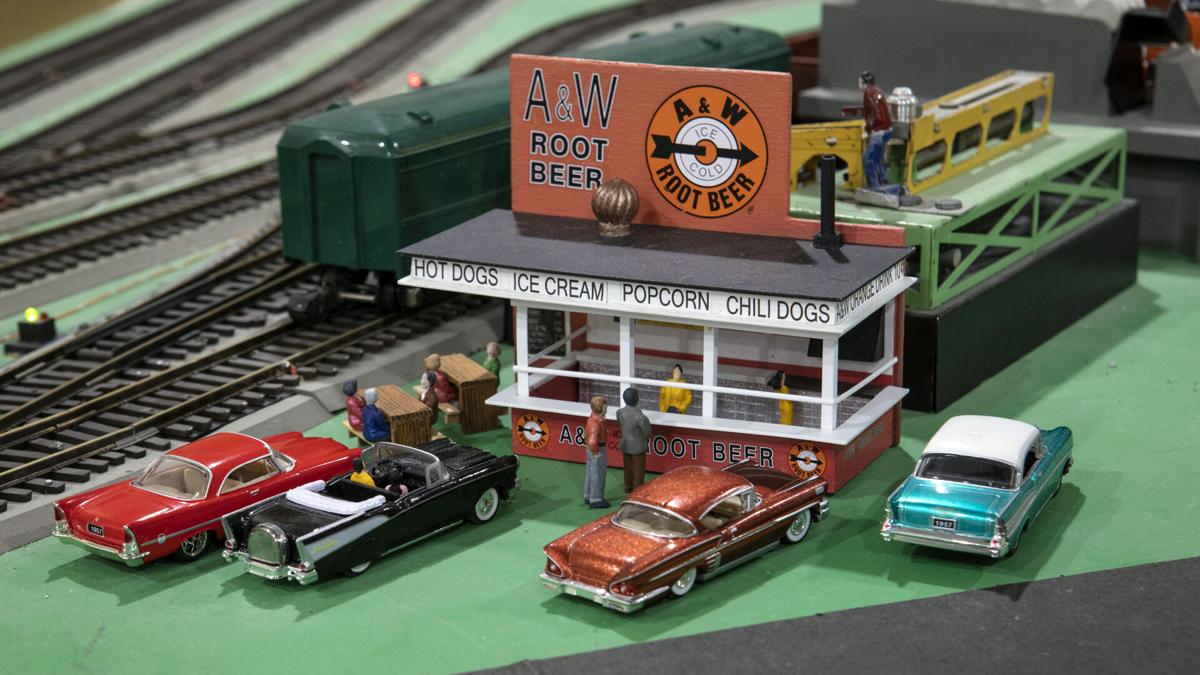 The A&W Root Beer stand is a popular attraction. 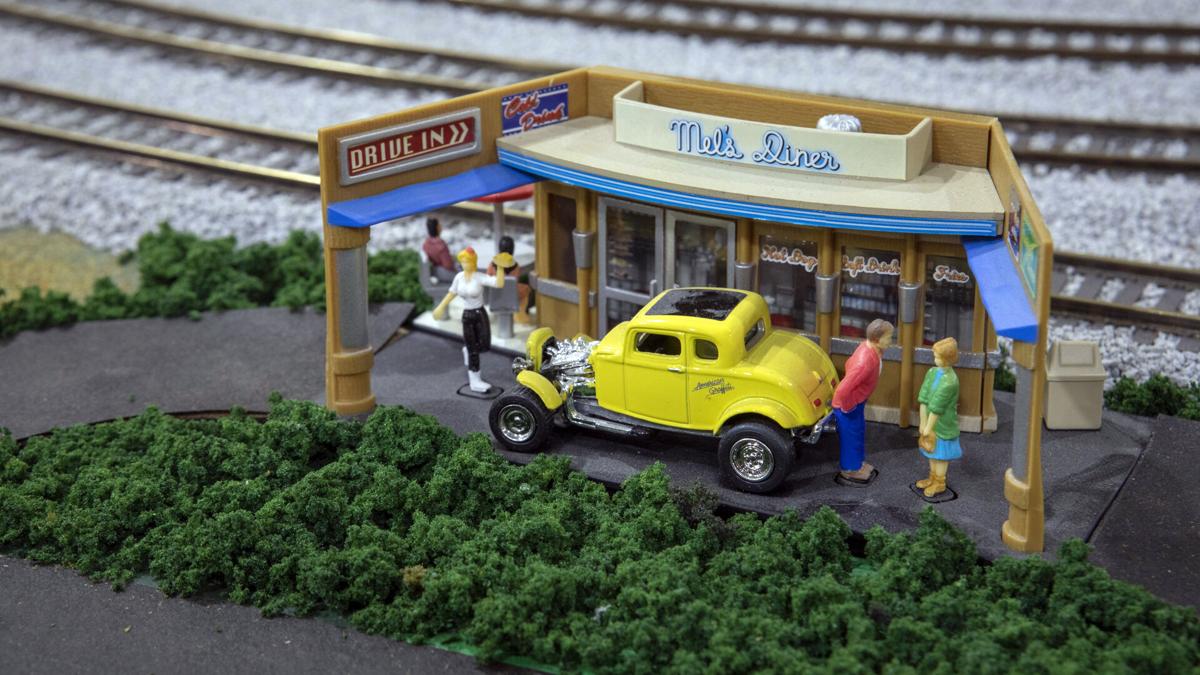 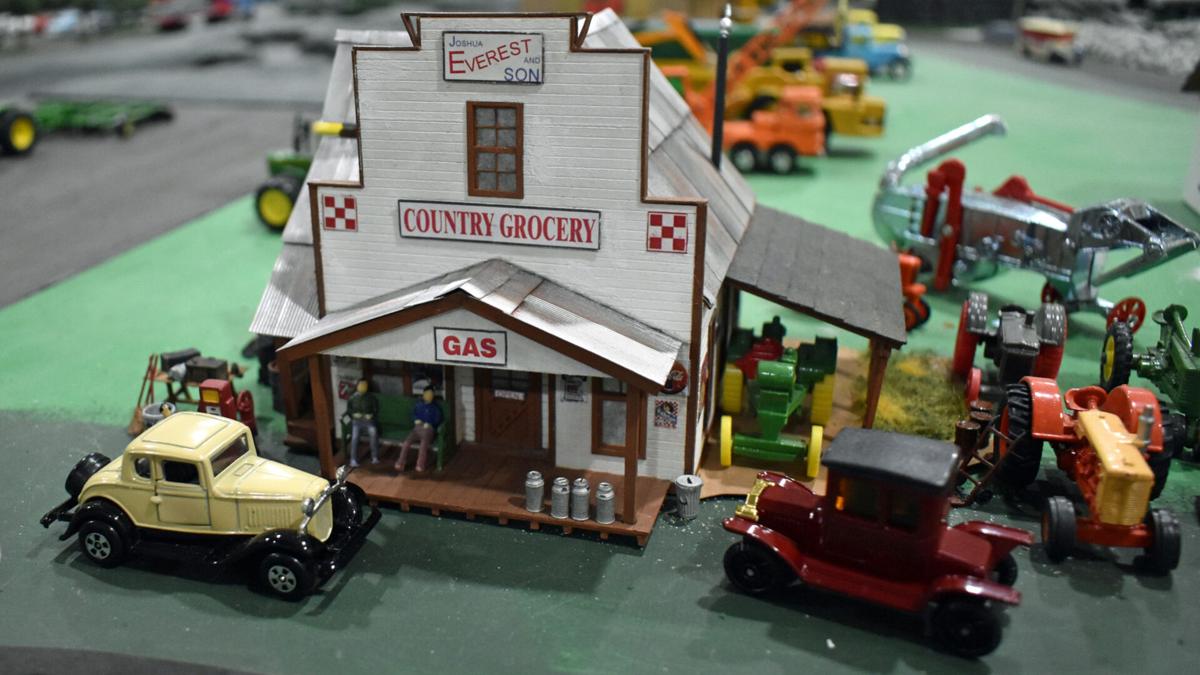 The Country Grocery is in the countryside near the railroad overpass. 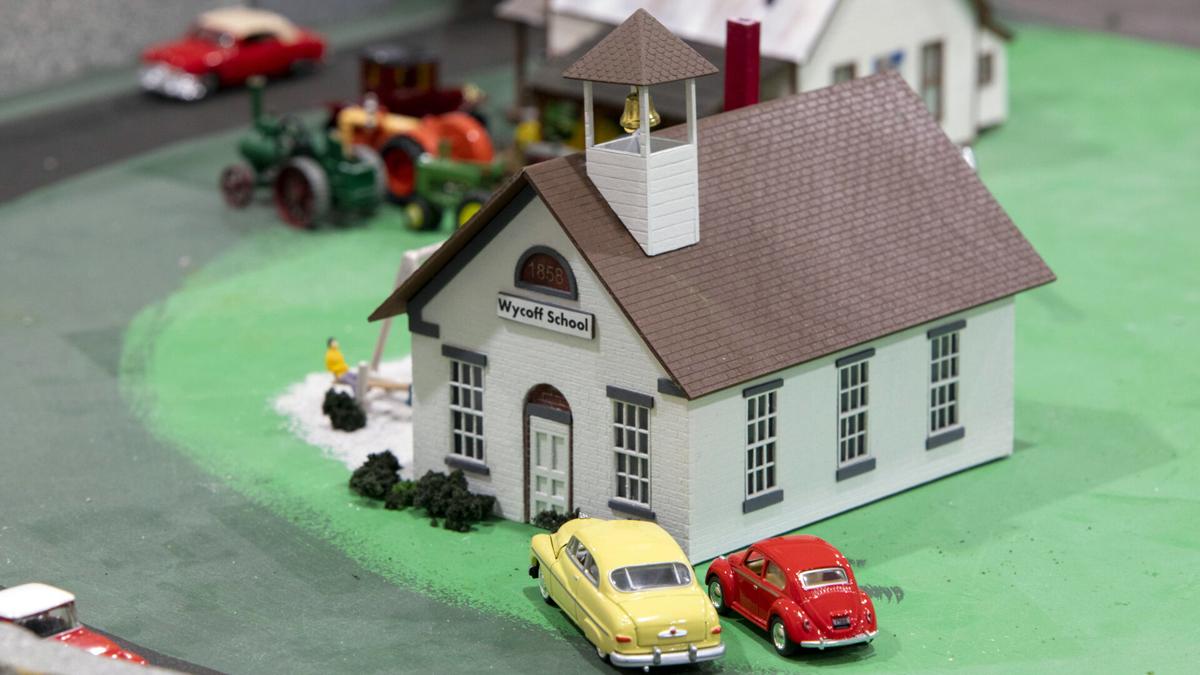 A one-room country school like the one the author attended in the early 1950s. 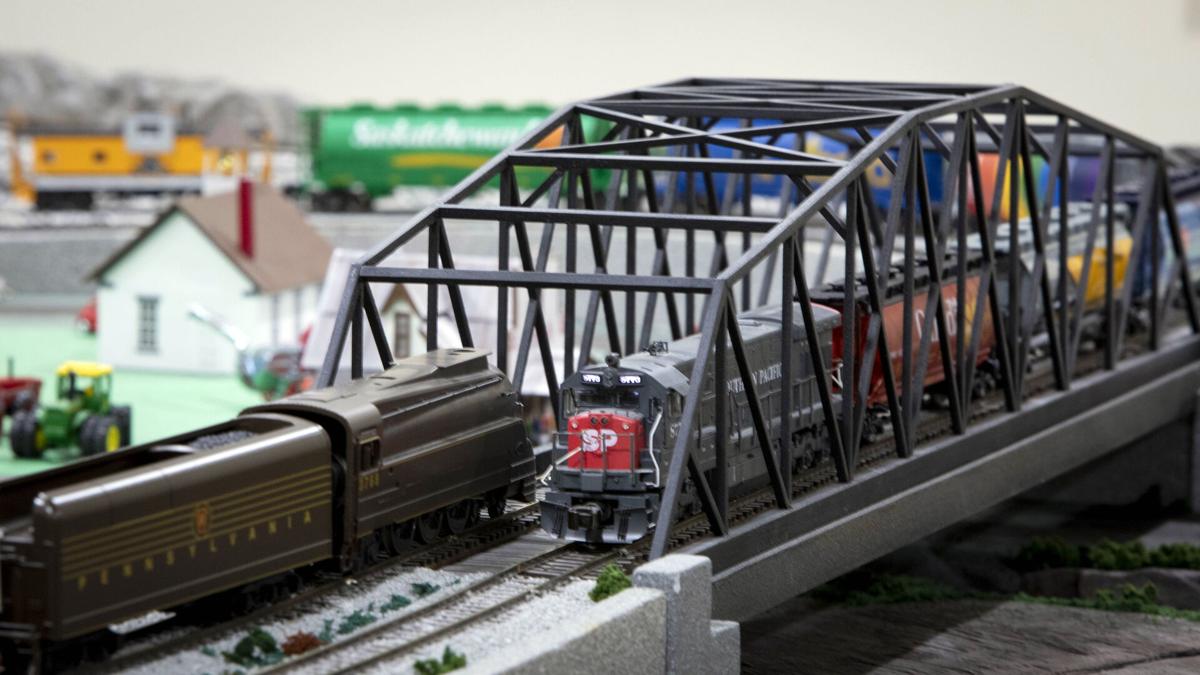 Two trains meet at the end of one of the river bridges. 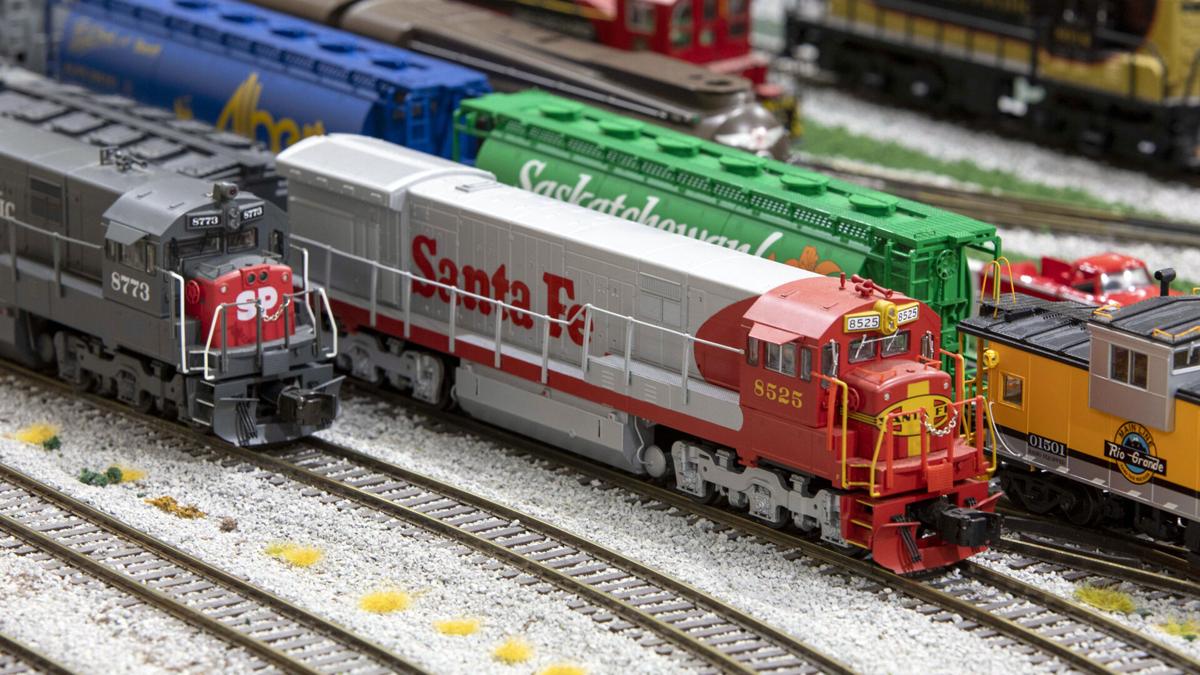 Trains parked in the yard where all tracks meet side-by-side. 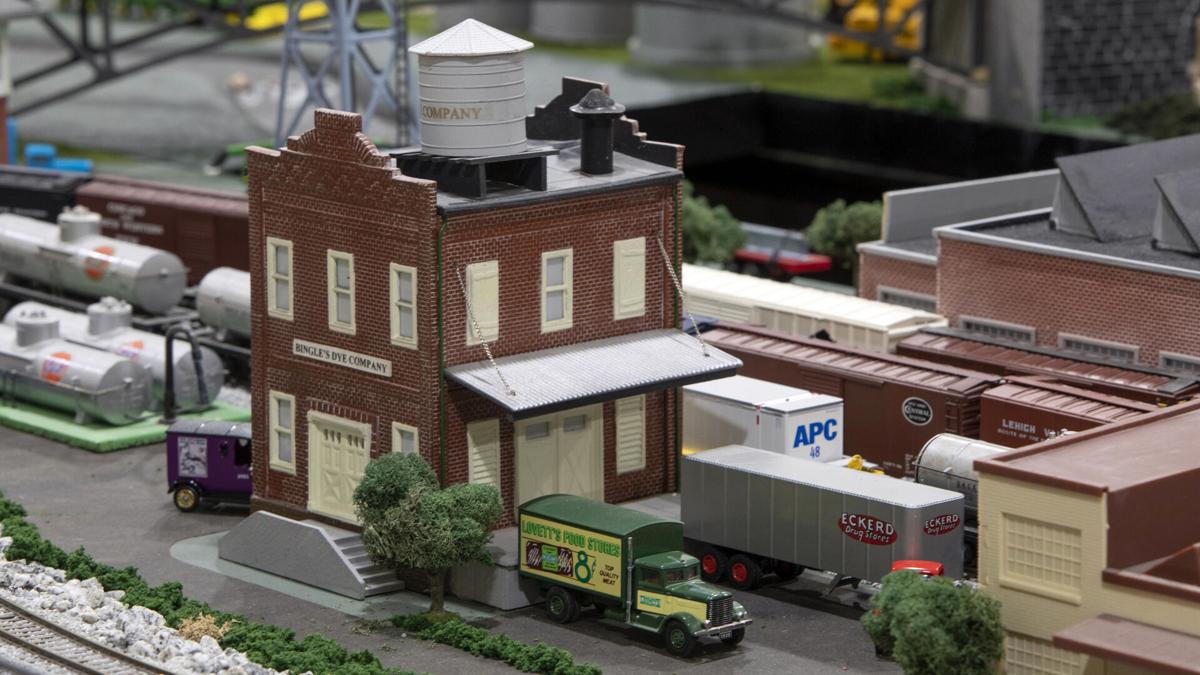 Factories between the tracks and the river. 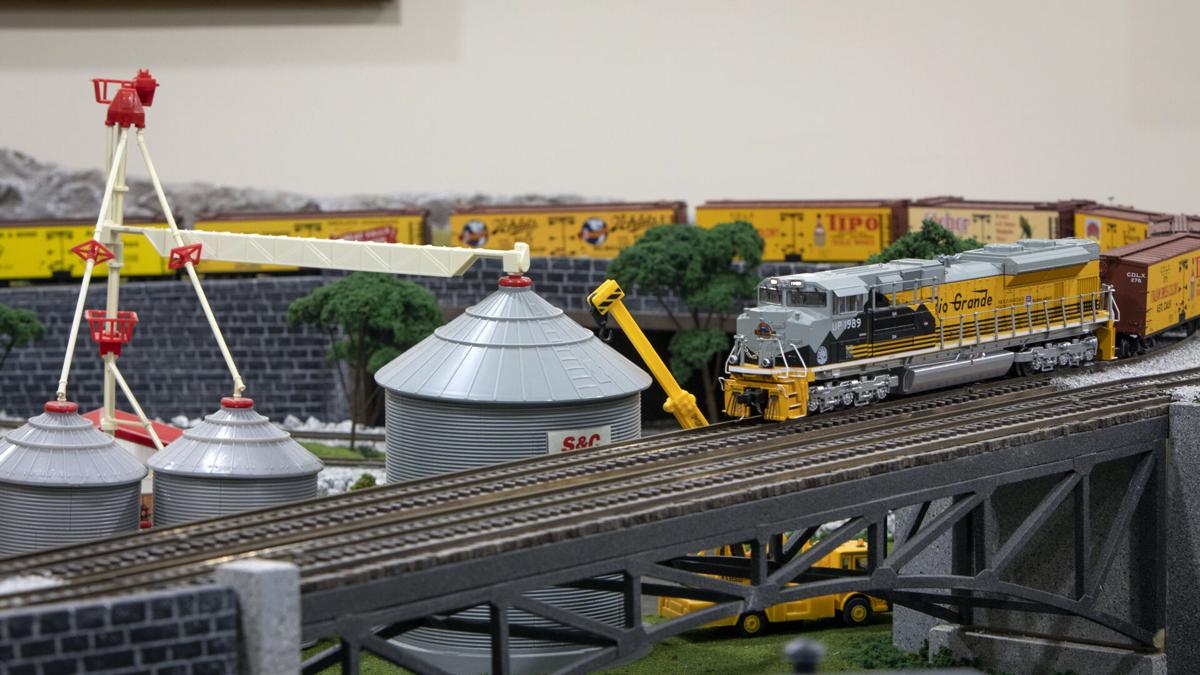 The Rio Grande engine starts over the bridge on the elevated section of track. 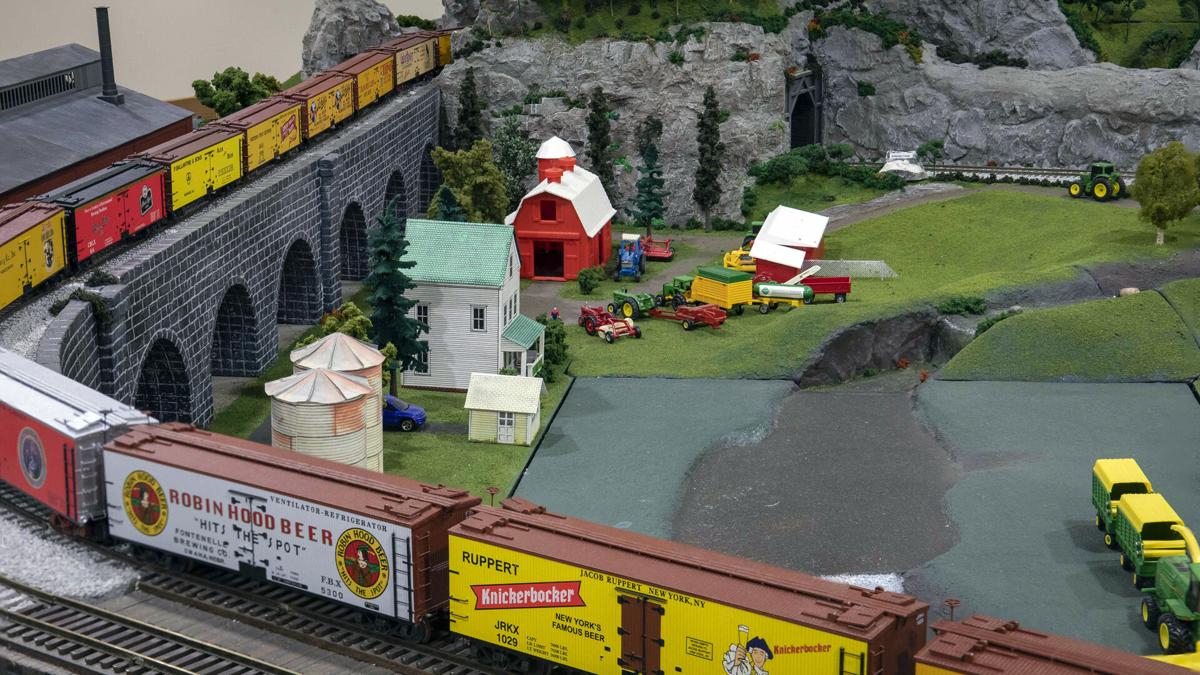 The beer train passes over the river above the Schneider Farms. 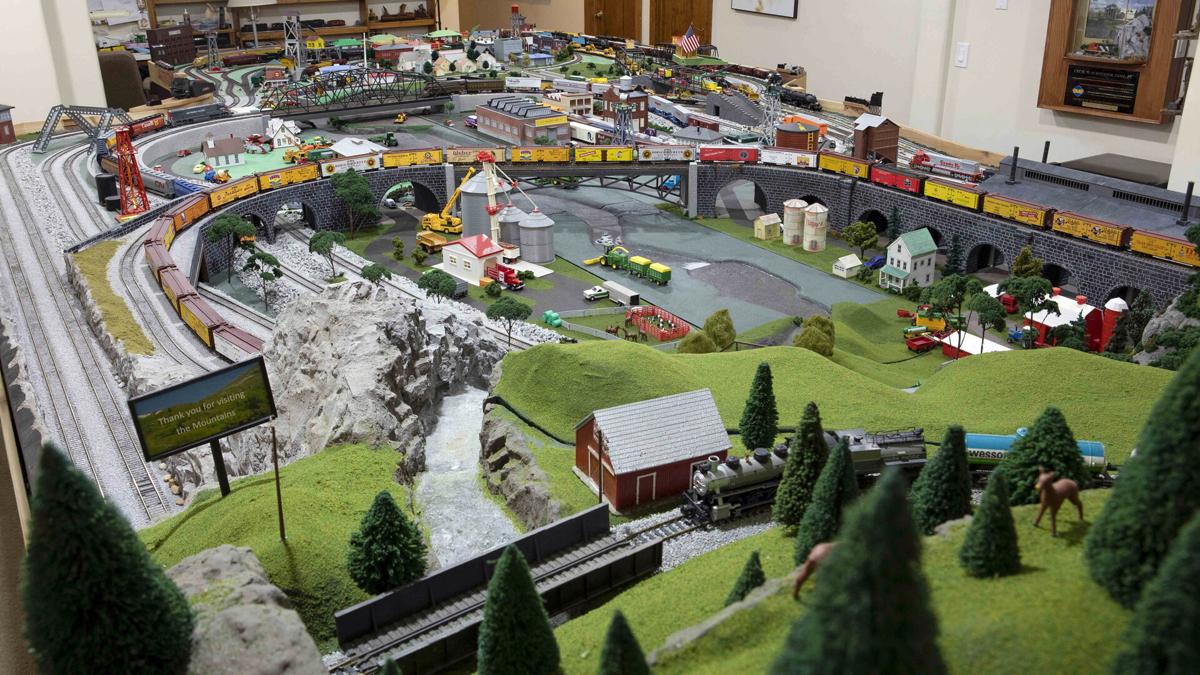 View of the layout from the top of the mountain. 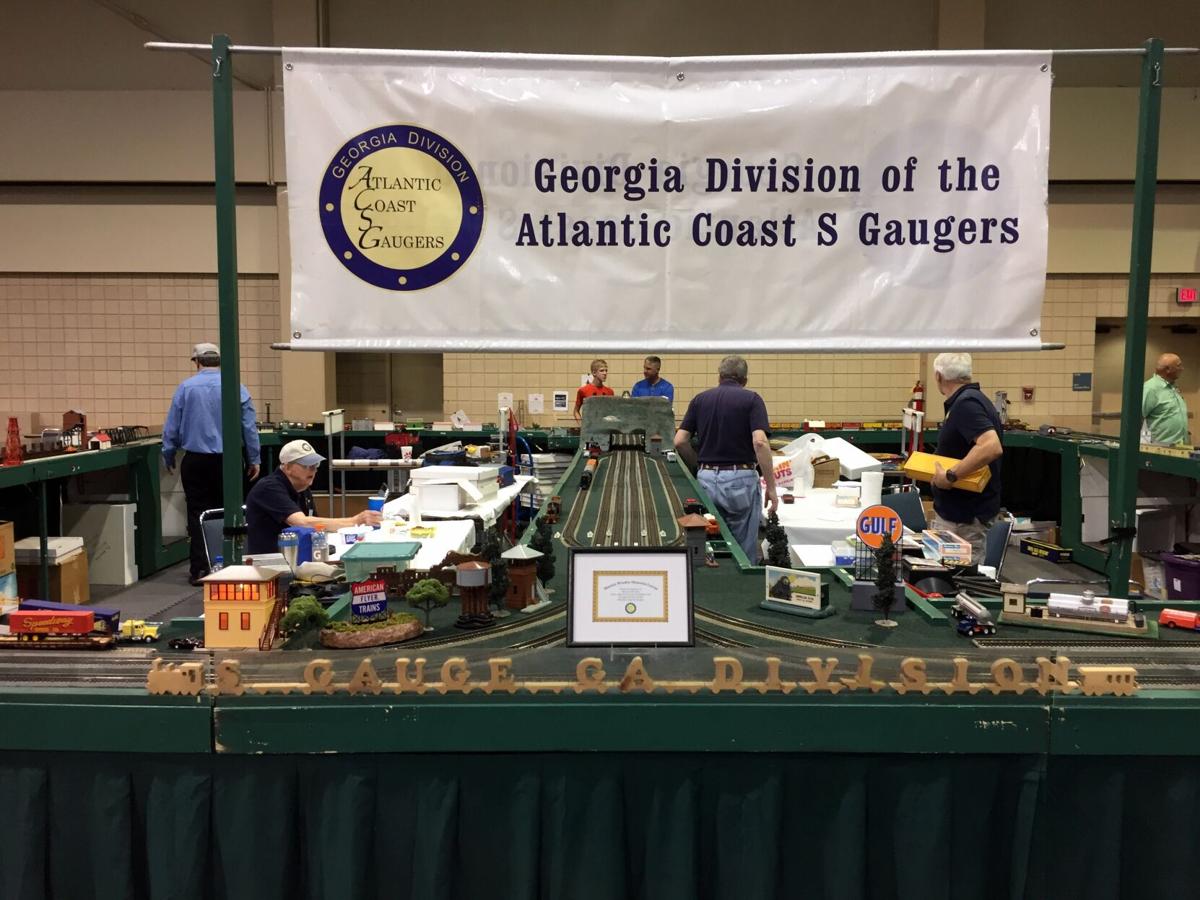 The train club modular layout is set up for train shows in the Atlanta area.

Like many people with model railroads, I received my first trains as a youth when my older brother and I received two American Flyer train sets for Christmas. One of the sets was a steam engine powered freight train and the other was a diesel engine passenger set with three locomotives. We built a layout in the basement of our parents Kansas farmhouse that had a mountain in the middle with tunnels, a town on one end and a farm on the other end.

I later sold my part of the trains to my brother so was out of the train hobby. I used the money to buy HO trains for my oldest son and passed the hobby onto him and he has HO and an N-Scale layout. After my dad retired from farming, he assembled a large collection of American Flyer trains, accessories and track. When he died in 1989, I received half of this collection and was back into the hobby, but just collecting until I retired from Lockheed Martin in 2001 after over 37 years with the company.

I started a layout in the basement of our home in East Cobb County but quickly realized that there was not enough room on the three four by eight-foot tables I had arranged in a T configuration, so I just had a table-top full of accessories and track. While we bought our lot in Big Canoe in 1982, we did not move here full time until 2006. That year we designed our current house with the train room taking up a significant part of the lower level. The layout is about 13 feet by 27 feet with room to walk around the layout. All power, phone and internet lines were buried in the floor during construction. The overriding goal for design of my layout was to have as many operating tracks as possible on the layout. I have six operating tracks and another operating siding leading to factories along the river.

I started the layout in October 2011 and it is still a work in progress since there is landscaping and other work to be done around the town. I originally had mostly Plasticville buildings in the town but have been gradually replacing them with 1/64th scale buildings. Plasticville buildings were made in the 1950s and 60s of plastic and were a little larger than S-Scale—closer to the Lionel O-Scale. I have several signal lights yet to install around the town that will require sensors to be embedded in the track with additional wiring to be completed. That is why there is no grass, landscaping, or ballast on the tracks between the river and the front of the layout.

The power center is located under the front edge of the layout on a slide-out shelf. Three dual-channel transformers power the six operating tracks. A fourth identical transformer sits behind the transformer on the right side to power the siding tracks. Three other dual-channel transformers sit behind these to power accessories. Transformer outputs are connected to Lionel Track Power Controllers located at the front of the shelf, one for each track. These provide power to the tracks and are controlled by a Lionel Legacy control system through a hand-held controller. The controller can operate any of the engines, any of the 57 turnouts or any of the accessories on the layout. S-scale trains operate on AC (alternating current) instead of the DC (direct current) that is used for HO and smaller scales. The Legacy system applies a constant AC voltage to the tracks and the train speed and sounds are controlled by printed circuit boards located in the engine.

In front of the depots are three tracks. The center is track one, and other two are sidings. An American Flyer Y3 engine passes by the passenger cars waiting at the depot and bulkhead flatcars sitting on the other siding.

An American Flyer SD70 diesel engine pulling a freight train on track two passes by the inside of the train depot and prepares to cross a road from town to the depot area. Like most of the engines operating on the layout this engine operates with the Lionel Legacy control system which has “crew talk” or other functions operated from the hand-held controller.

Some of the buildings in the town bear family and local area names. On the left side of the town square is the Schneider Hardware store, which is next door to the Jasper Drug Store. Behind the bank across the street is Linda’s Snack shop – named after my wife.

The church is located beside the road as it enters town. Children play in the side yard, which is common to the school located on the adjacent street. A station wagon enters the parking lot in front of the church with a policeman controlling traffic at the intersection.

A freight train with two American Flyer U33 diesel engines exits the river bridge on track three as it enters the town area. The river at this point is on the lift-up section that opens to allow access to the interior of the layout.

Located on the other side of the tracks from town is the A&W Root Beer stand, a popular attraction in our youth. Cars are parked in front with a couple of guys waiting to place orders as others enjoy their drinks at the picnic tables.

Mel’s diner, featured in the first article on Reverend Len Walker’s O-Scale layout, has a drive-in roadside stand next to the tracks. A waitress carries food to the yellow souped-up Ford roadster while a guy talks to his date behind the car.

Further down the road from town is the Everest & Son Country Grocery store. From appeances it has become a general merchancise store over the years, with old tractors stored by the side. A 1932 Ford Model A coupe is getting gas while a Model T coupe waits for its owner to return from the store.

Just past the general store we’re in the country and find a one-room country school with a swing set and tetter-totter sitting by the side of the road. The Wycoff school is named after the one-room school that I attended from the fifth through eighth grades, with 13 kids in eight grades.

One of the two large scratch-built railroad bridges that span the river and the lift-out panels that provide access to the center of the layout. An American Models K4 streamlined steam engine meets an American Flyer U33 diesel engine at the end of the bridge span.

On the side of the layout all six tracks align next to each other adjacent to a two-bay engine house. Three trains parked on the tracks include two U33 diesels, one in Southern Pacific and one in Santa Fe colors.

In the middle of the layout is an industrial area with three factories and an oil storage site. One of the factories is the Bingle Dye Company, named after my wife’s mother’s family. Trucks are backed up to the dock area picking up or making deliveries. Three railroad sidings loaded with freight cars serve the factories.

The Rio Grande SD70 pulls the 33-car beer train over the elevated section and starts across a bridge over the river. Three grain bins on the other side of the track store grains from the farm.

The elevated section supports tracks one and two and passes over the Schneider Farms. Since I grew up on a farm that was located next to a river this had to be a part of the layout. The farm sits between the elevated tracks and the river, with a cattle lot on the other side of the river. The beer train on track two is made up of refrigerated cars bearing logos for different brews as well as a few wines.

The deer grazing at the top of the mountain have an excellent view of the HO train sitting below and of the entire layout, with the beer train winding around the elevated section and the town in the far distance. The river passes by the farm nestled at the foot of the mountain before flowing downstream. Maybe someday I’ll get around to naming the mountain after McElroy Mountain where we live.

There is a lot of work remaining on the layout to get to a “completed” status—but I don’t believe that any layout is truly complete because the builder will find something to change when it looks done. Installation of train sensors on the tracks to operate the crossing lights and signals is high on the priority list and planting of more trees on the mountain meadows comes in second.

My work with model trains goes beyond my layout. I’m a member of the Georgia Division of the Atlantic Coast S Gaugers model train club. We have a 29 foot by 30-foot modular layout with a yard and four tracks that we set up at Atlanta area train shows and operate our trains as an enticement to draw visitors to the shows. Children (and adults) can push buttons on the sides of the layout to operate the log loader, barrel loader and other accessories. The last train show was in February 2019, just before the pandemic closed all such events. At the current time the modules rest in a trailer waiting for this to pass. If you have an interest and want to attend these events when they start back up use your browser to search for train shows in the Atlanta area – maybe in the fall.

Please check out the video of the author's railroad layout below.