Overall view of Bill Gibson’s HO railroad layout, from the town on Vinings on the right to the Tate Marble quarry on the left.

The Tate marble quarry section of the layout, just beyond the town of Blue Ridge. 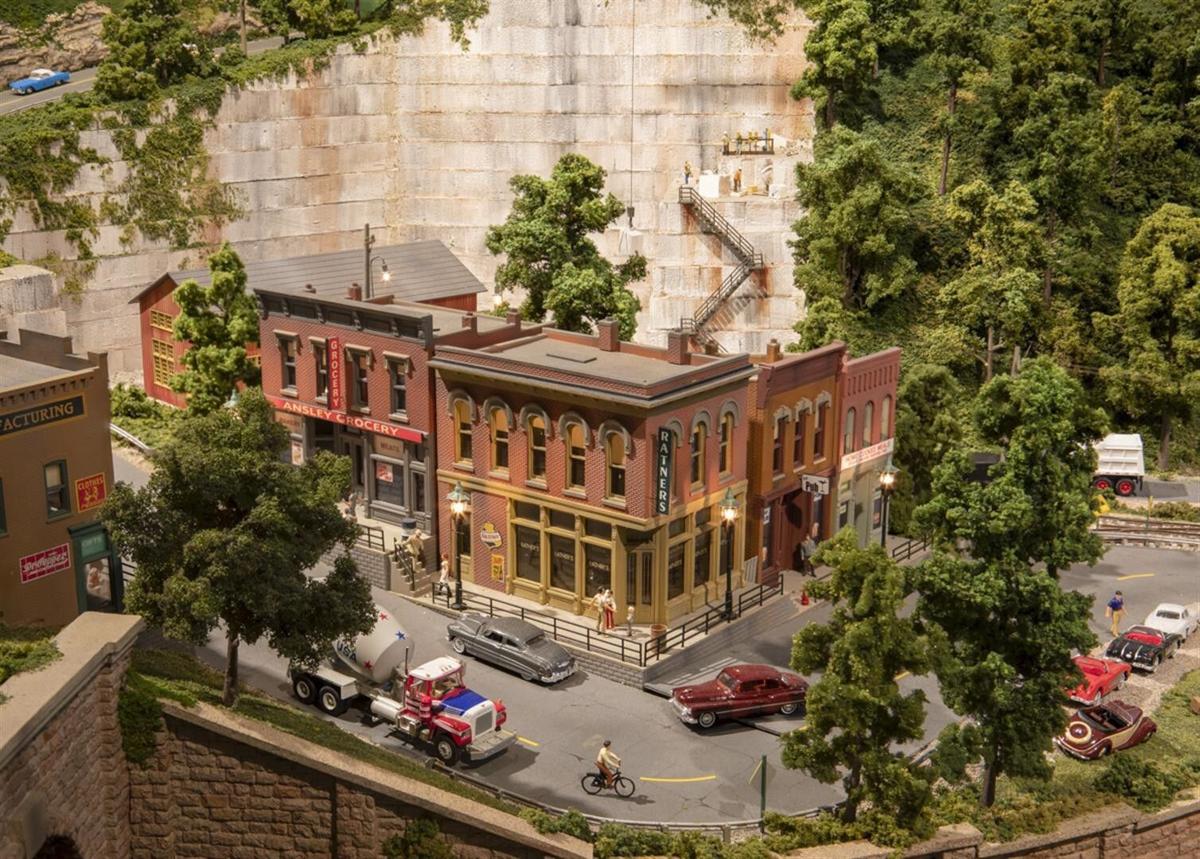 The town of Blue Ridge is located beside the marble quarry. 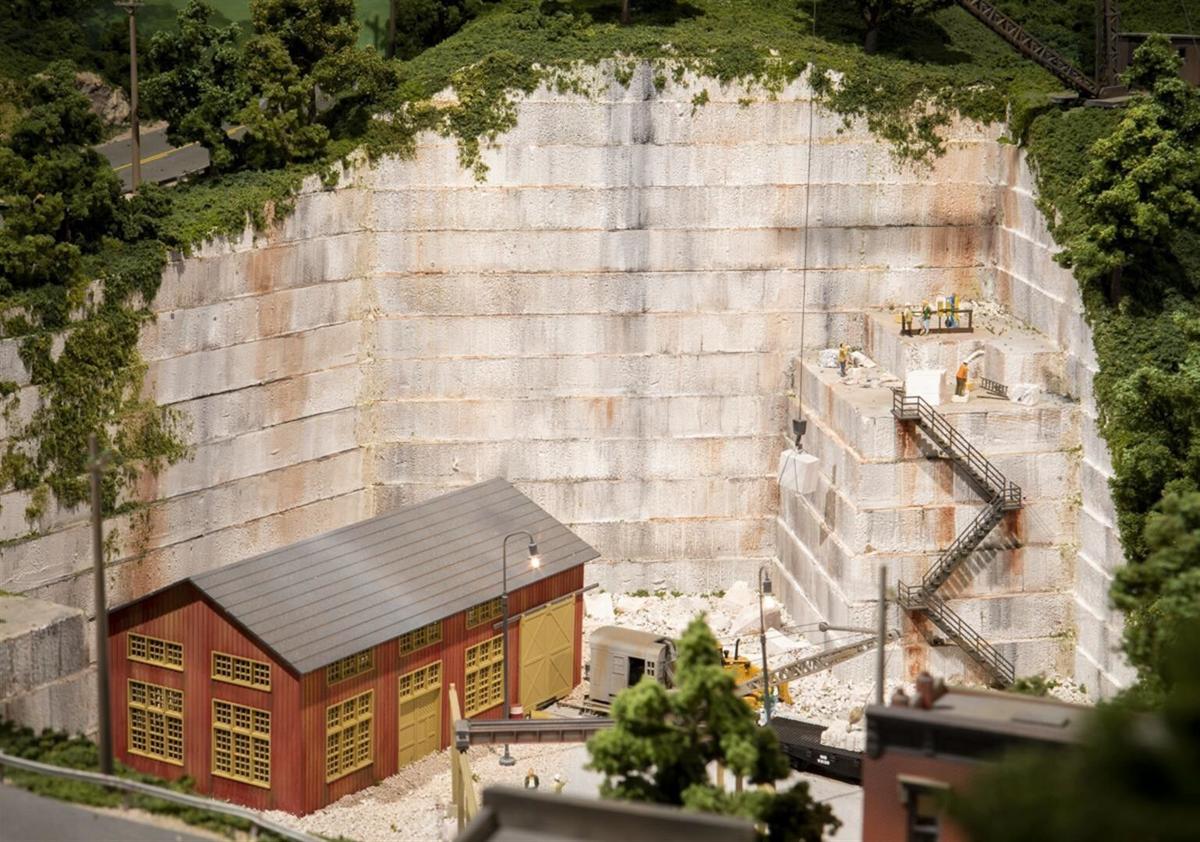 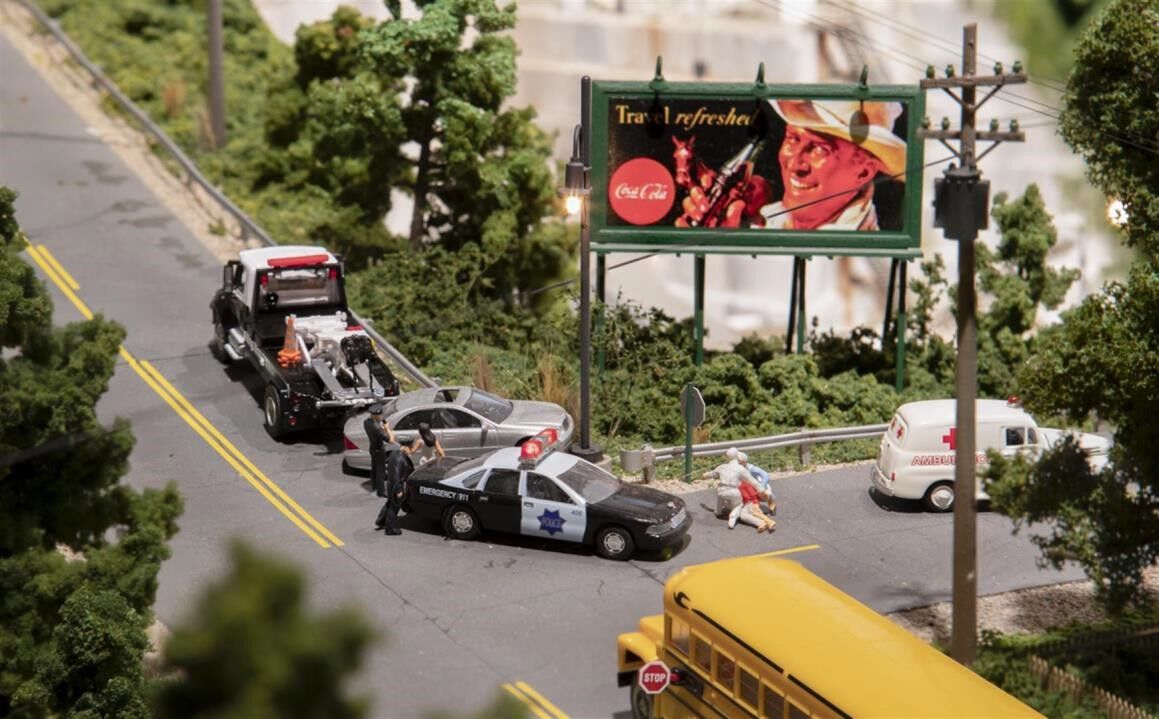 An accident at the edge of Blue Ridge. 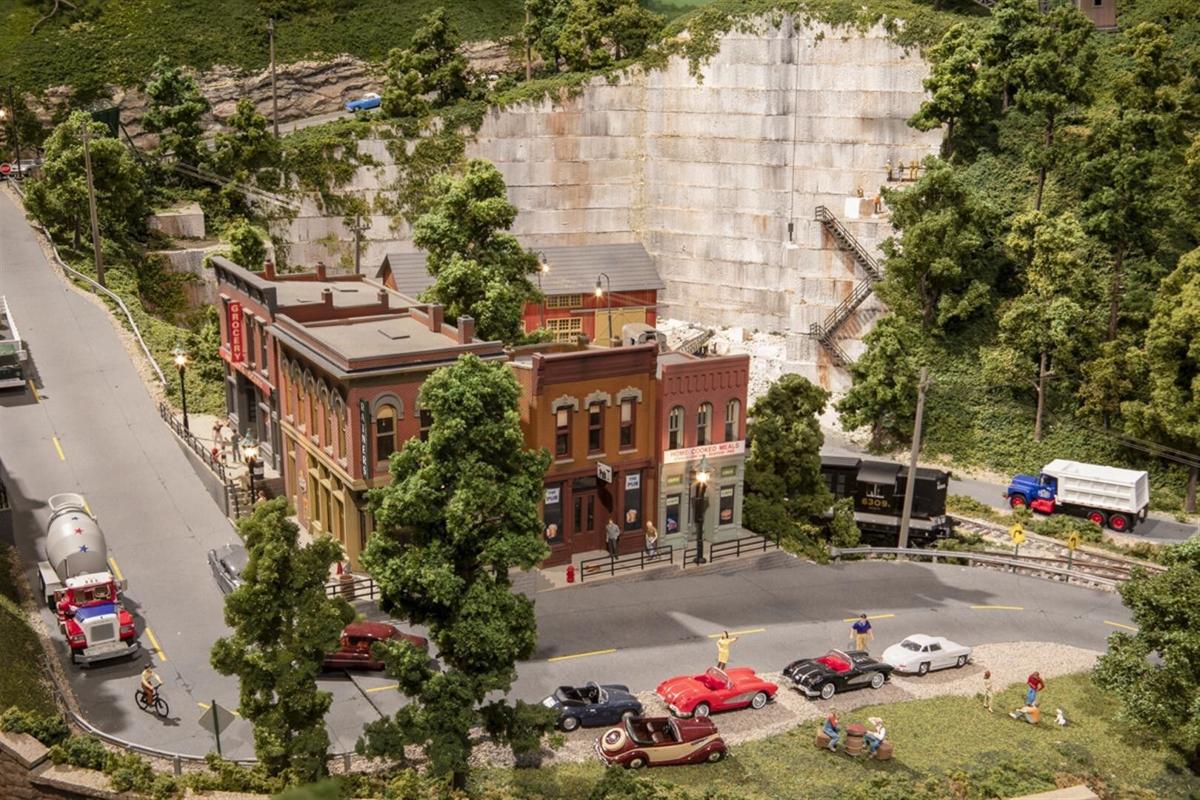 A group of classic car buffs having a picnic. 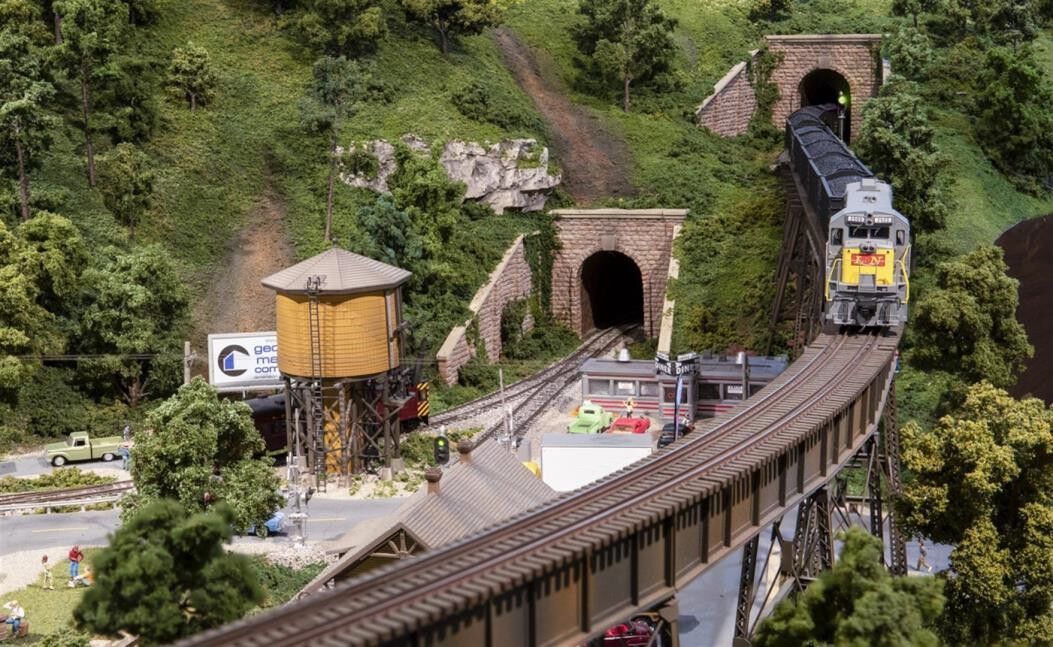 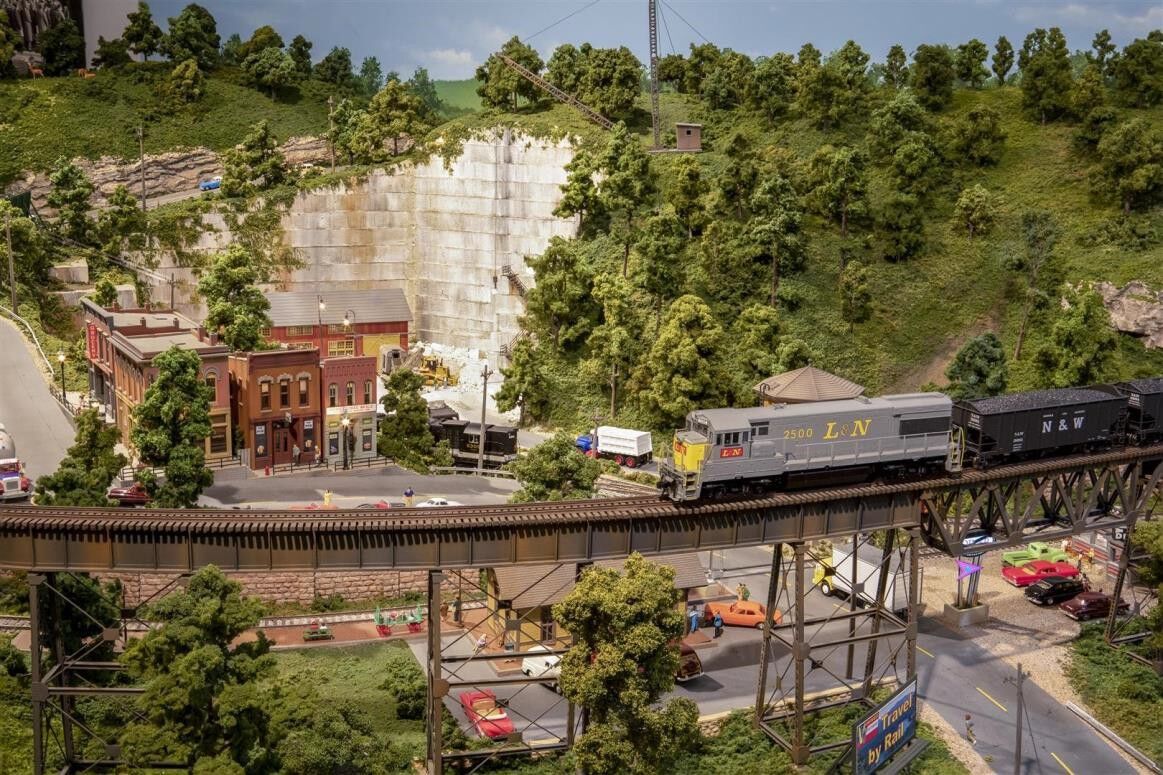 L&N coal train on the elevated trestle above Blue Ridge. 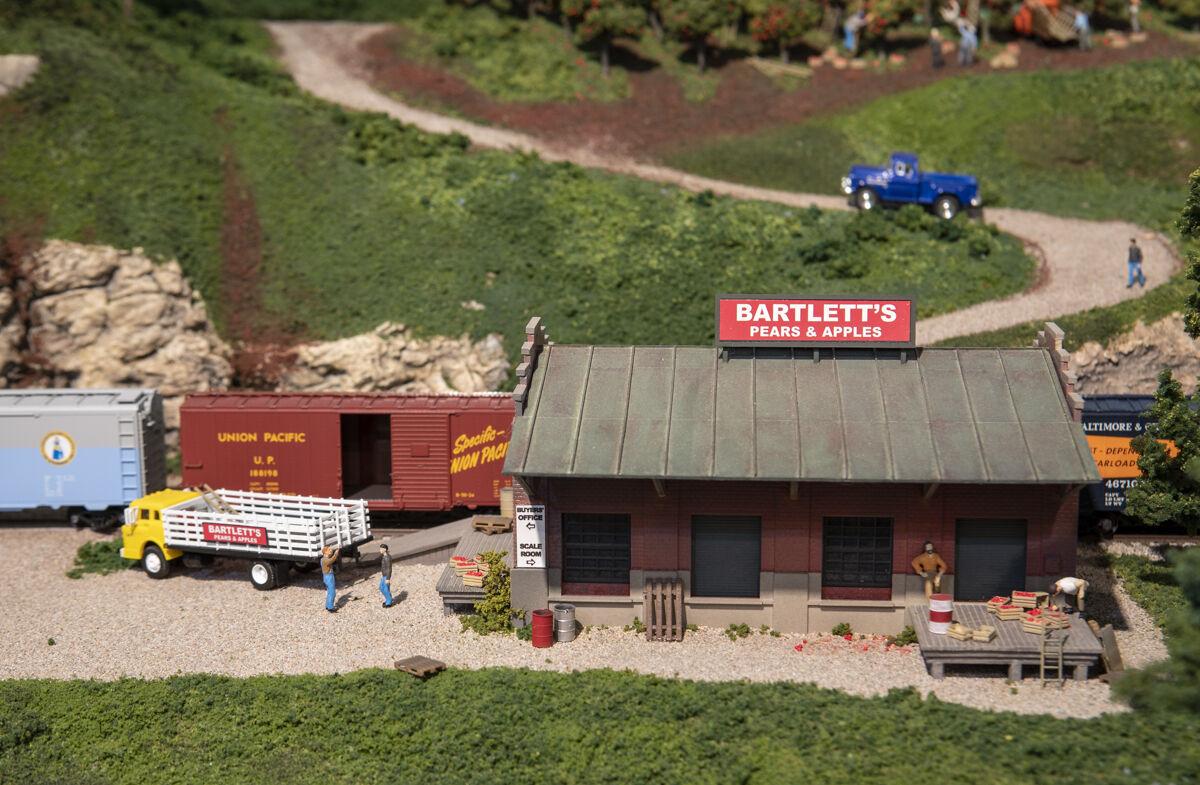 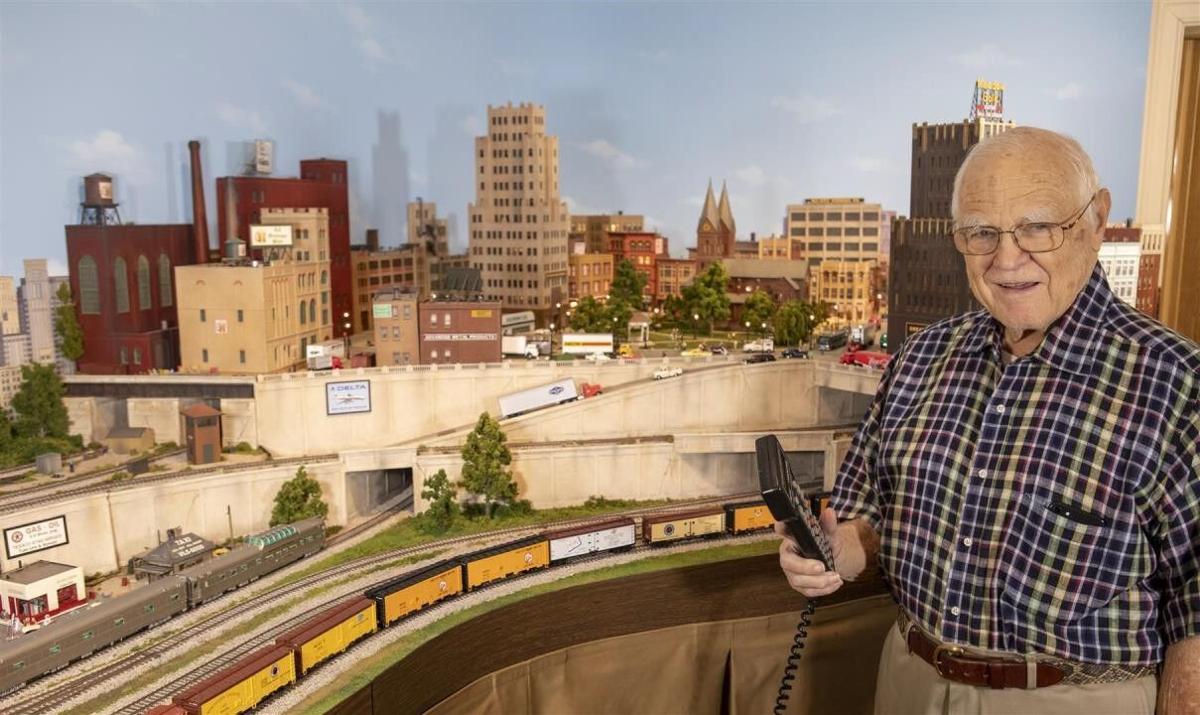 Bill Gibson holding a DCC controller in front of the Vinings section of the layout. 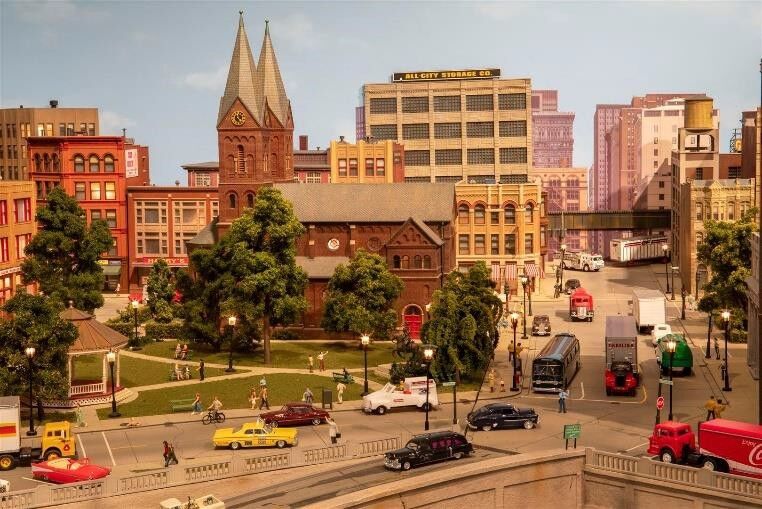 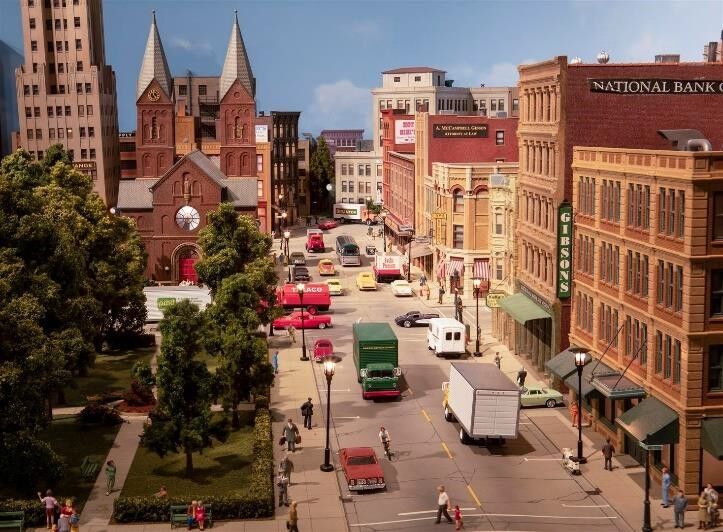 Vinings Main Street, with Gibson’s Department Store on the right.

Bill Gibson is one of several retired Delta pilots who live in Big Canoe.  Bill and his wife Susan moved to Big Canoe in 2002 and for many years has been active in the North Georgia Veterans Association and the Big Canoe Chapel. When Bill retired from Delta after nearly 31 years his interest changed from being a captain on the large Boeing 767 passenger jets he had been flying to driving small model trains that he could hold in his hand.  But he was no stranger to model trains.  “I received my first Lionel trains at the age of five and had an operating layout until the family moved to Germany in 1954 and the trains were packed away,” said Bill.  “The trains were briefly unpacked with the hopes that my kids would get the same enjoyment and educational experience I had as a kid, but it was not to be since the children were involved in too many team sports and cultural activities.  I was a little busy myself transitioning from an army aviator to a Delta pilot,” recounted Bill.

Bill’s envisioned layout was incorporated into the design of their Big Canoe home with one large room dedicated to trains.  “The train bug had bitten me again.  I knew I had some of the skills to build a first-class layout but had little experience with making good scenery or in designing with the new DCC (Digital Command Control) systems for controlling the trains,” said Bill.  He also wanted to emphasize their love of the North Georgia mountains and the community of Vinings, where he and Susan lived for 29 years.  Bill retained the services of Steve Worack, a respected model train builder from Chicago, to design and build the custom set. Bill drove Steve around North Georgia and Vinings to get ideas to incorporate into the layout. One of Bill’s other requirements was “to cover the time period from the late 1950’s through the early 1960’s, a time when steam powered locomotives were still operating and diesel locomotives were becoming more prevalent.”  After a year of design and construction it was installed into our new home, a process that took three people a week,” said Bill.

And what a layout it is.  The Vinings Northern Railroad runs from Vinings through the mountains to the Georgia Marble Company’s Tate quarry and back. “There are basically two double track loops, upper and lower, so you can operate two trains per level, or four trains at a time,” according to Bill. However, since the loops are interconnected at certain points, the operator must take care not to have a faster train overtake a slower one. This is accomplished by a signal system to guide the operator to prevent train wrecks. “As I tell new operators, watch ALL your signals, and adjust speeds accordingly. Each hand-held controller can operate two trains, and more if the operator is willing to deselect one of the trains momentarily, but this is not recommended,” said Bill.

Bill has several different brands of locomotives. “The largest number of locos I have are from Broadway Limited, which normally has the best trains and the best decoders. Atlas is my next favorite brand, because of their engine’s reliability and power. Also, I have several Walthers and some Athens as well as some brands that are no longer in production due to mergers or buyouts,” said Bill.

At one end of the line is the Tate quarry with large blocks of marble being cut from the mountain pit.   An elevated track provides the L&N engineers an excellent view of the quarry as a coal train emerges from a tunnel and passes by the town and quarry.

Beside the Tate quarry sits the town of Blue Ridge.  Bill said that this was “supposed to be Tate but was named Blue Ridge through a communication mix up with the builder.”  The town name is prominately displayed on the water tower that sits on a hill above the town.

The Tate marble quarry is the centerpiece of one side of the layout.  The marble pit shows workers busy cutting and moving large blocks of marble from the marble slab to waiting flatcars for transportation. A large crane lowers a block from the cutting area to the pit floor.

At the intersection of the highway and road into Blue Ridge a car has run over the railing and a police car, ambulance and wrecker are on the scene to take care of the injured person—hopefully, there were no serious injuries.

At the other end of town, a sports car group is taking time out from their country drive to enjoy a picnic by the side of the road.  A diesel locomotive sits on a siding by the edge of town by the road to the quarry, probably waiting to pick up a load of marble from the quarry.

As the railroad winds around the mountains, it crosses a river on a long bridge and then passes by Bartlett’s Pear & Apple Farm, with workers loading produce on boxcars behind the building.  “Bartlett’s is named after my daughter Mary Lee and her husband Steve Bartlett” said Bill.  “We named many of the buildings on the layout for family and friends to honor them,” he continued.

Past Bartlett’s the railroad winds around the train yards with a roundhouse that holds several train engines and other industrial buildings.  It then approaches the outskirts of Vinings where a passenger station waits for the passenger trains.  Vinings’ buildings in the background show a city busy with traffic—not quite rush hour but still busy.  Bill holds one of his DCC controllers that he uses to control the trains and track switches.  The controller can start, stop, increase or decrease speed of any engine on the railroad as well as allowing him to ring the bell or train whistle.  The remote is connected to phone-like receptables that are positioned around the layout to provide walk-around control.  The DCC controller is located beneath the layout and controls the output of the DC transformers that provide power to the tracks. “DCC has the advantage that a constant DC voltage is applied to the tracks and engine functions, including speed, are controlled by digital signals from the controller to vary power output to the train wheels,” said Bill.

The end of the line is the city of Vinings, where Bill and Susan lived for more than 29 years. The incredibly detailed downtown area has many multi-story buildings, a church and park. The city is busy with traffic and pedestrians on a beautiful day in the city.

Prominent in the right of the view down the street is Gibson’s Department store and further down the street the A. McCampbell Gibson, Attorney-at-Law sign occupies the side of a red brick building. “This is for our son, who was a partner at Alston & Bird in Atlanta for 21 years; and is now the managing partner of a smaller, more specialized firm,” he said.

Bill and Susan recently announced that they have decided to donate the detailed layout to the Tate Depot so it can be enjoyed by others.  Efforts are currently underway by the Stewardship Committee for the Tate Historic Depot to plan and find financing for setting up the layout in the depot.

A video of Bill’s HO model railroad can be viewed below.