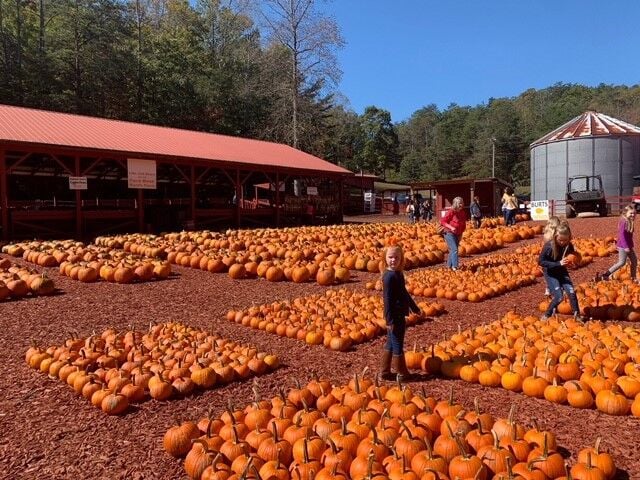 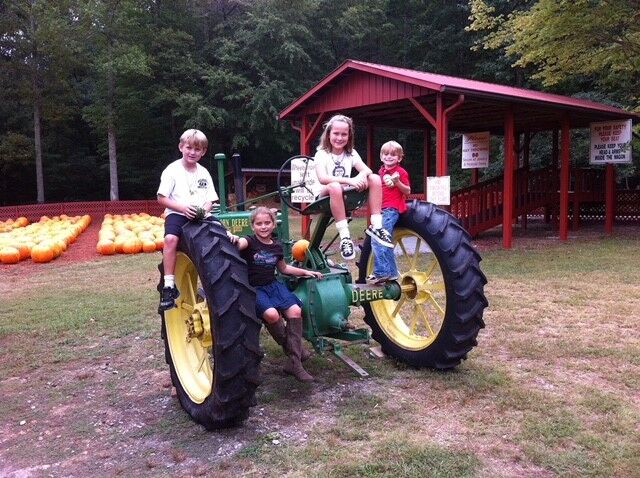 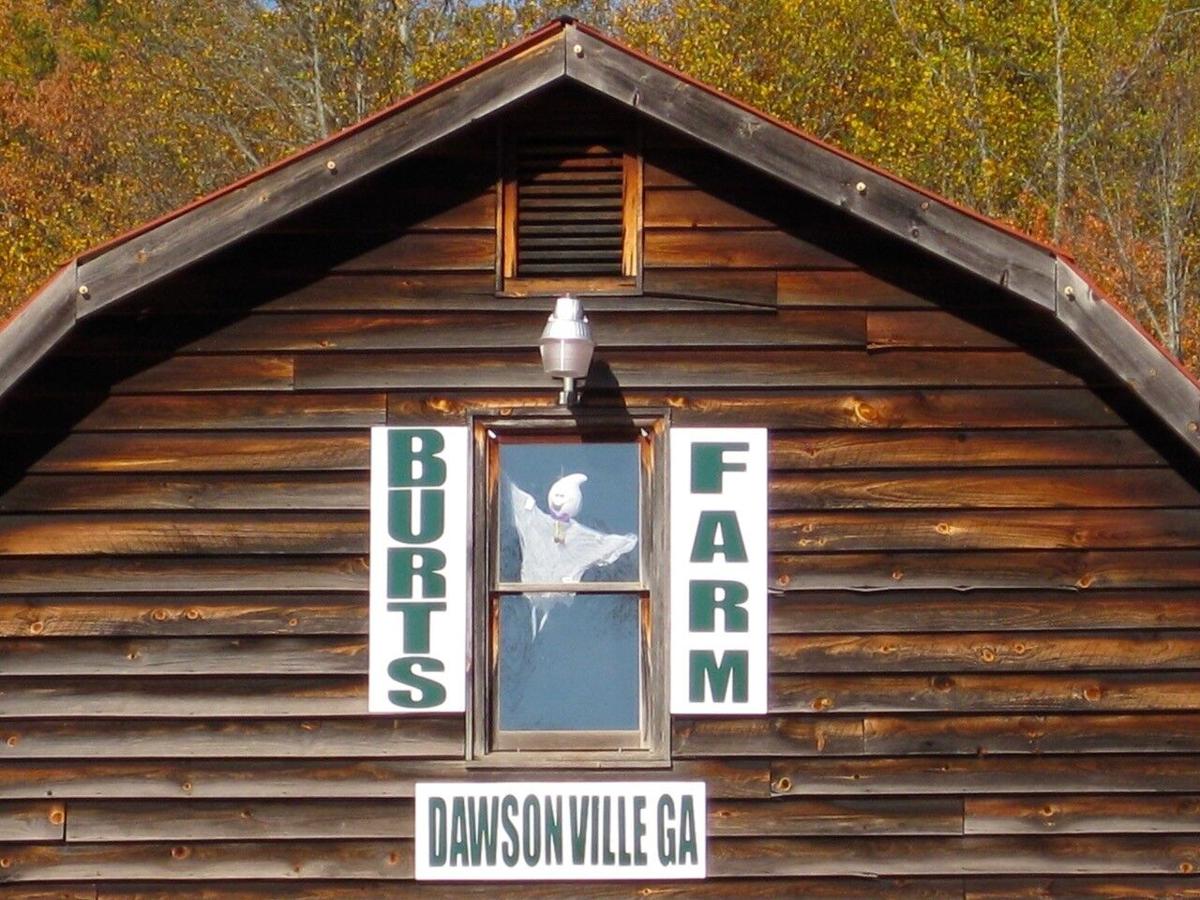 The barn has welcomed guests to the farm for more than four decades. 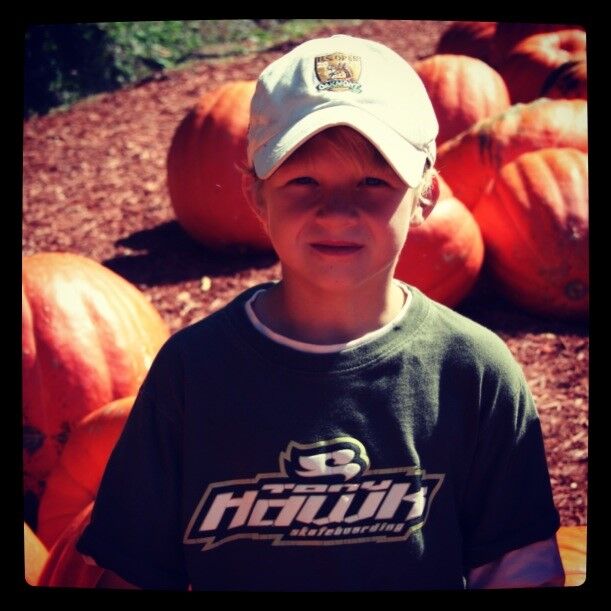 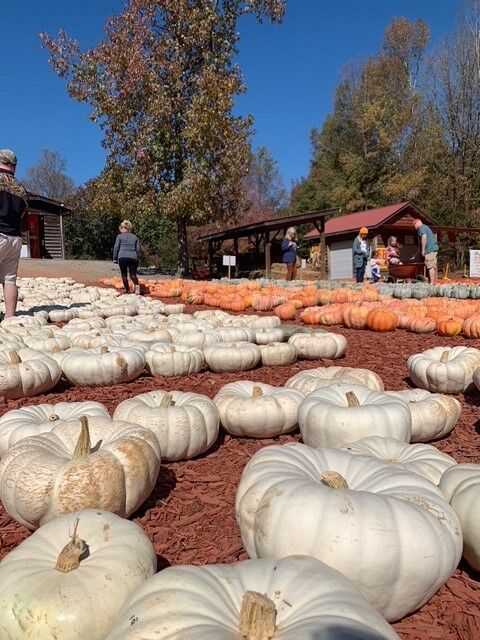 Beyond orange, pumpkins come in white and green, too. 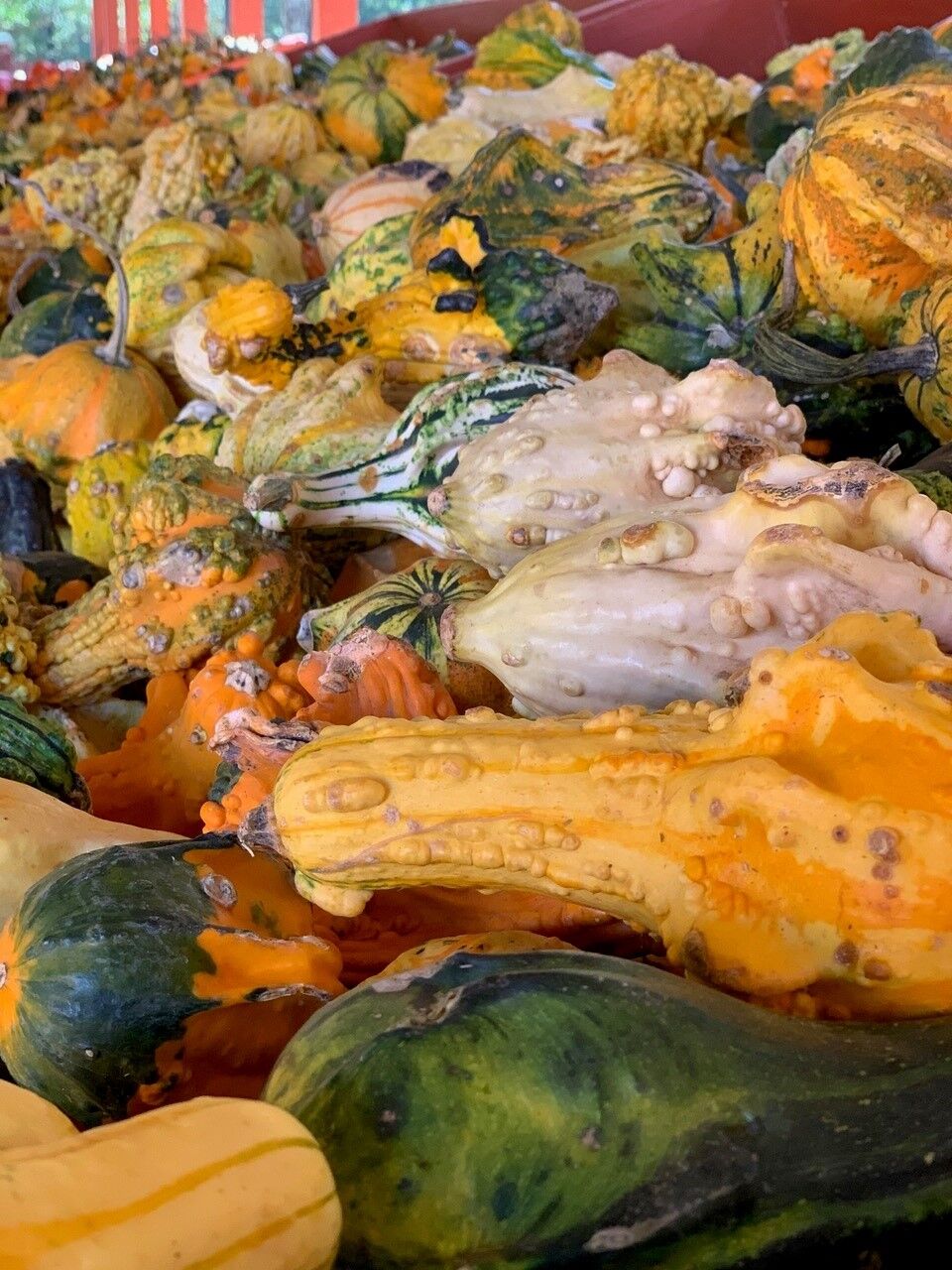 There are plenty of colorful gourds to choose from.

Burt’s Pumpkin Farm is a seasonal, bountiful treasure. Would fall be complete without the beautiful, colorful gourds they so carefully grow? These harbingers of autumn sound the bell: Seasons are changing!

The fact Burt’s Farm exists within a stone’s throw of Big Canoe is pure luck for its residents. People make the pilgrimage from much further, yours truly included. In our pre-kids’ life, my new husband and I would drive up to “the country” from our apartment in Atlanta (circa 1998-ish) for a fun fall outing. We’d follow the other city people up Georgia 400, deep into Dawson County to take pictures among the rows and rows of pumpkins. Years later we enjoyed taking our kids, in what would become a yearly tradition.

Burt’s Casey Sanders said “Atlanta has always supported us; we have around 50-75 thousand people visit the farm every year.” Based on my non-scientific, purely personal, traffic-based analysis, folks are coming from all over the South to Dawsonville for pumpkins. If you’ve ever been in the Burt’s orbit on a sunny October Saturday or Sunday, you know what I’m talking about.

According to their website, Johnny and Kathy Burt began growing pumpkins in 1972; they lived at the entrance of Amicalola Falls State Park. “Over the next twenty years, the Burts sold pumpkins from a stand in their own front yard. Johnny and Kathy, along with their three children, Kasey, Russ and Cameron, worked on the farm growing and selling their pumpkins. They watched as the family farm grew from year to year, eventually making it a way of life.”

Thirty years ago, the Burts decided to build a barn and some pumpkin sheds on family land near Amicalola Falls. This is where Burt’s Farm stands today.

Clearly, the North Georgia soil provides the right composition for solid, consistent growth (for the product, and therefore, the business). Burt’s Farm now grows between 50 to 70 acres of pumpkins every year, boasting more than 30 specialty varieties in all colors and sizes.

The most popular pumpkins are ‘Prizewinners.’ According to Sanders, “people go wild when they see them.” This particular type of pumpkin is huge— ranging from 75 to 300 pounds.

How long does it take a pumpkin to grow? Depending on the type of pumpkin, it can take anywhere from 90 to 120 days to grow to maturity. They require full sun, six or more hours a day, and, if no rain, water once a week. Burt’s starts getting their fields ready in mid-April and early May; the pumpkins are planted at the end of May or first of June.

For the average gardener, they can be planted after the last frost in spring, but as late as mid-summer for a ripe gourd for autumn harvest decor. Sadly, both deer and bears love to snack on pumpkins, so they may not fare well in Big Canoe landscapes. Nonetheless, a packet of seeds can be procured for around five bucks.

Burt’s also grows and sells ornamental corn and colorful winter and acorn squash. The shop sells all things fall and a wide assortment of food and gifts. Jams, jellies, honey, salsa, popcorn, pickled vegetables, body wash, T-shirts, hats … you get the idea … they produce and sell much more than potential jack-o’-lanterns.

Don’t sell autumn’s orbs short as strictly ornamental—they are also quite good for you. Vitamin-packed pumpkins are technically considered fruit because of their seeds. They are members of the gourd family and are grown on every continent but Antarctica. According to www.history.com, the state of Illinois is the largest producer of pumpkins in the United States. (The US Department of Agriculture says Georgia doesn’t crack the top six in production.)

Eating pumpkin, and pumpkin seeds, is a nutritionally sound decision. Seeds especially are mini-powerhouses, high in antioxidants. They contain healthy fats, magnesium and zinc and are a good source of fiber plus vitamin C. Pumpkins are rich in beta carotene, the pigment that makes a brightly colored fruit or vegetable so vibrant. It’s a smart idea to creatively incorporate gourds into your diet. Think soups, muffins, bread, pies, pasta, hummus, cobbler, cheesecake, butter, lattes … OK … maybe the pumpkin spice latte won’t pack the same nutritional punch as a bowl of pumpkin soup, but they’re still yummy.

Burt’s Farm started the 2021 season in September. They are now open daily from 9 a.m. to 5 p.m. through Nov. 10. Hayrides are $6 per person; 2-year-olds and under are free. According to their website, no pets or firearms are allowed on the farm.

They are located at 5 Burt's Farm Road in Dawsonville, about 20 minutes from the Main Gate of Big Canoe. Visit www.burtsfarm.com or their Facebook page for more information.