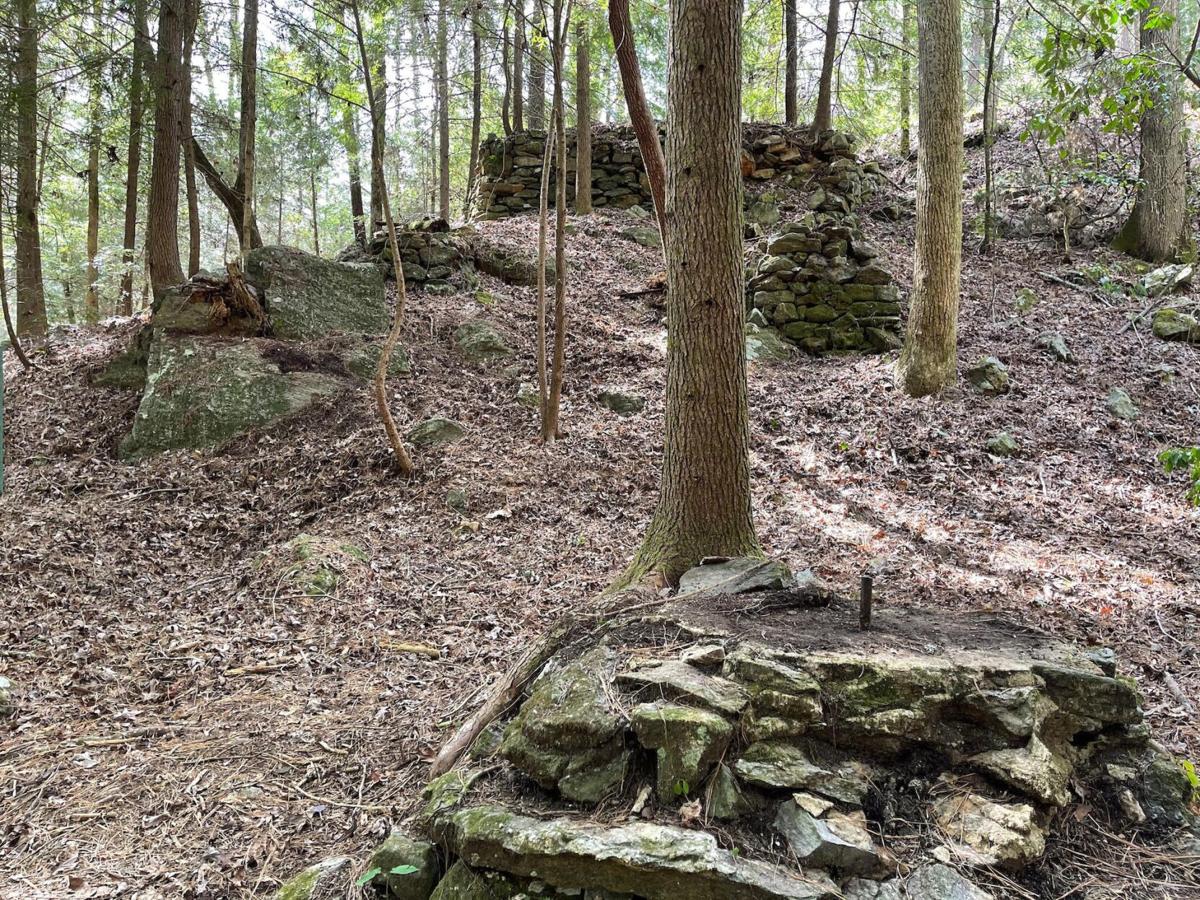 Footing ruins from a bridge built over 100 years ago. 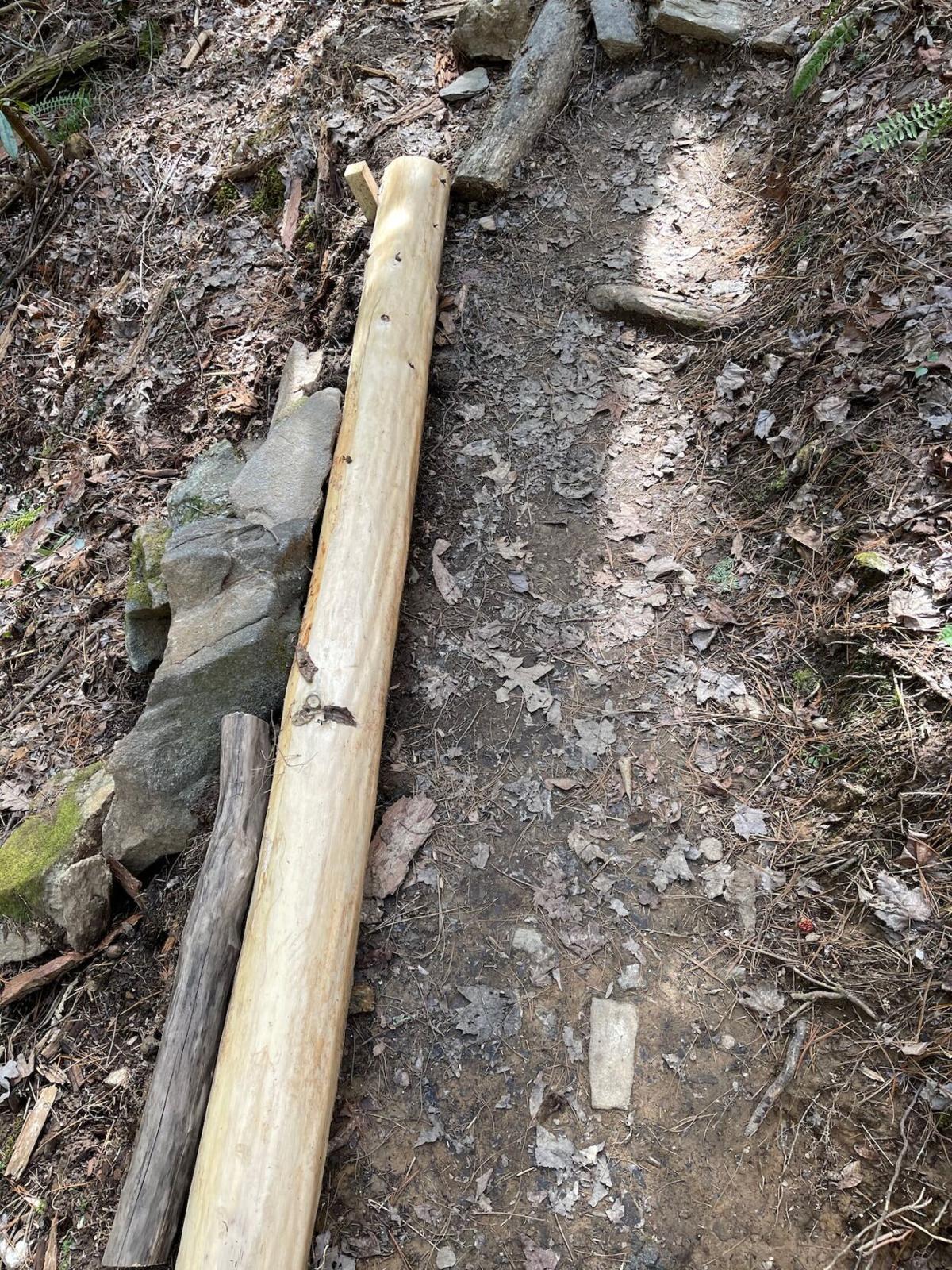 Fresh cribbing supports the edge of the trail. 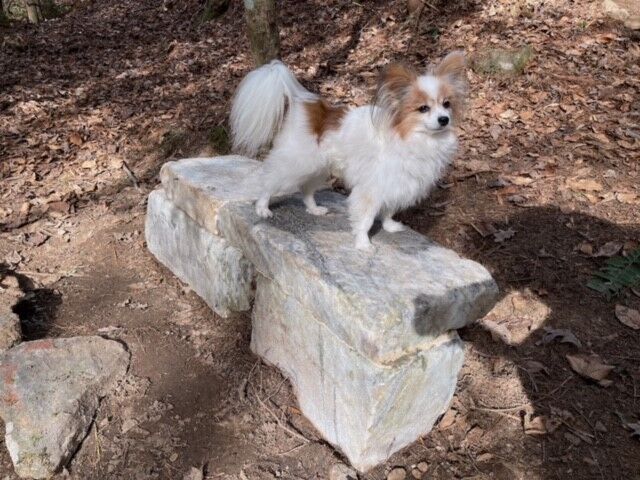 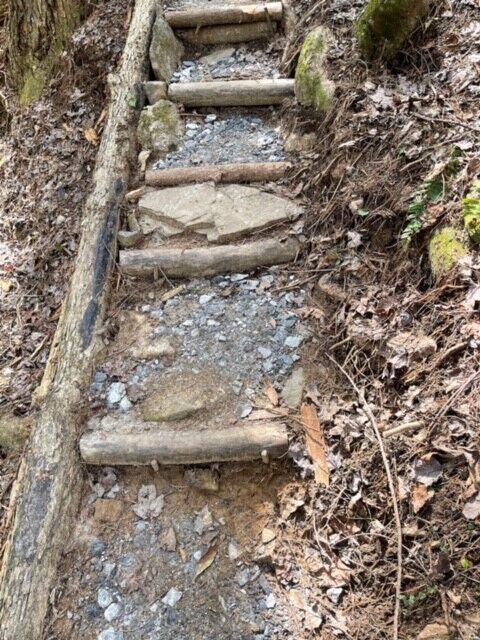 John and Jim Hansen hauled buckets of gravel to build up the eroded slippery clay steps on the John Williams Trail.

Since their creation, the two trails south of the covered bridge in Meditation Park had taken a beating with downed trees and erosion. They are difficult trails to work on due to the steep slopes covered in certain places.

These trails were built in the mid-2000s by Trails Committee members. On many workdays, up to a dozen people were led by Frank Wright, who used his expertise in trail-building from working on the Appalachian Trail. A good portion of the John Williams Trail had to be cut along a steep embankment using supporting large rocks and timbers. The path was wide and clean upon its completion.

Over time, with rain and damage from falling trees, the trail started to erode along the lower edge, the log cribbing started to rot and rock supports shifted. Timbers used for steps also started to fall apart.

The trails had become difficult to navigate except for the most sure-footed.

In addition, downed trees and limbs blocked the view of the beautiful stream where people enjoyed sitting on large rocks by the water to take in views of small waterfalls and eddies under overhanging hemlock boughs. Those rocks became inaccessible as storm debris accumulated on them over time.

The trails required much effort to return to the state where they would be stable, wide enough for a comfortable stroll, and have erosion controlled and steps refinished.

Meet the Hansens. They joined the Trails Committee in 2020 and were eager to restore the trails to their original condition. John and his wife Mary Ann were joined in their work by John’s brother, Jim. The three took advantage of the cooler weather to refresh supports on the trails, widen paths where they had become narrow, stabilize a stream crossing utilizing larger stepping stones, cut back limbs from downed trees blocking the view of the stream in picturesque areas and remove debris from the stream that not only looked ugly but also interfered with the flow of water, causing shore erosion.

Where the trail settled or eroded to the point of leaving large roots exposed, the Hansen team filled it with dirt harvested from root balls of fallen trees. One area they worked on had a small spring oozing out of the side of the hill next to the trail, causing it to be continually wet and muddy. The Hansens built up the trail using large pieces of gravel that allowed the water to flow without making it muddy. They also rebuilt a muddy set of steps next to the spring with gravel and sand. Sand was hauled in buckets all the way from the parking lot at Trotters Lane, quite an accomplishment on its own.

Near the covered bridge, ruins from an old bridge stand on a road that led to a large house in Wolfscratch Village. Most of those ruins were covered with vines and vegetation. The Hansen team cleared them and cleaned up the area. It was like discovering a Mayan temple in the jungle! With the old stone footings now visible, hikers can see how big that old bridge must have been.

There were pieces of marble by the water’s edge the Hansen team fashioned into a creekside bench.

Speaking of benches, all the wooden ones, in addition to the bridges and signs, were pressure-washed by the Hansens using a battery-operated pressure washer. Battery technology has come a long way. A hose used water from the stream for the job. Pressure-washing bridges keeps them free of moss, which retains water and causes the wood to deteriorate faster.

Thank you, Team Hansen, for a job well done.

Inside the Gates April 2021