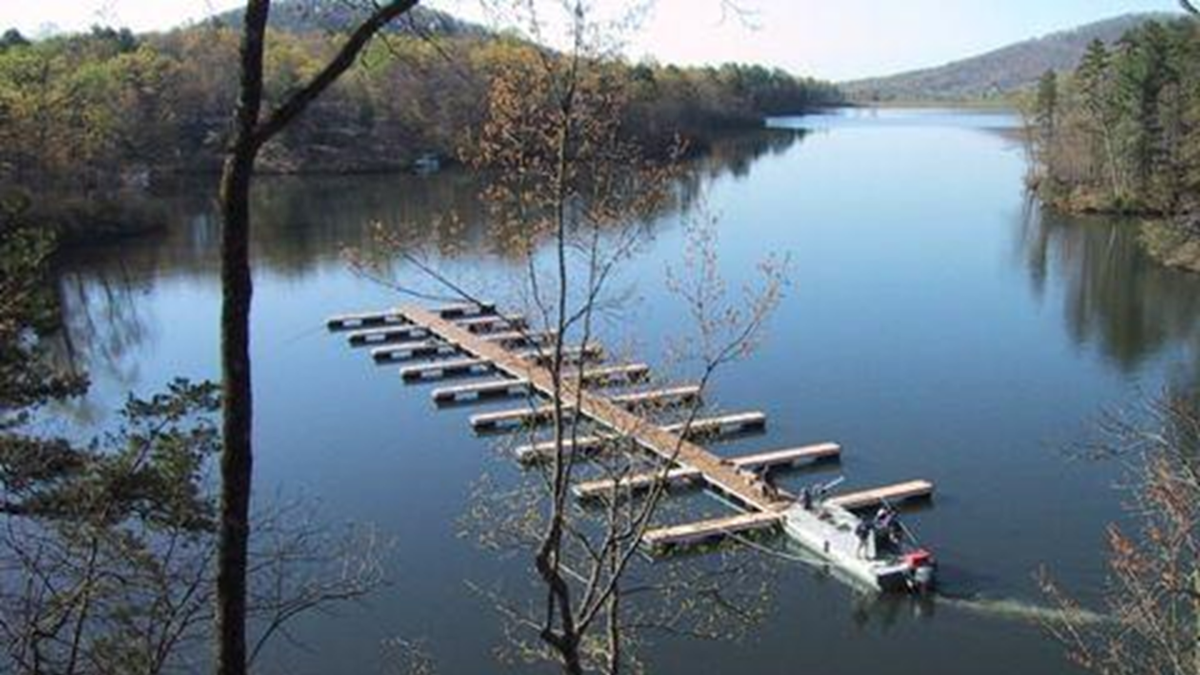 Moving docks from one end of the lake to the other is often challenging. 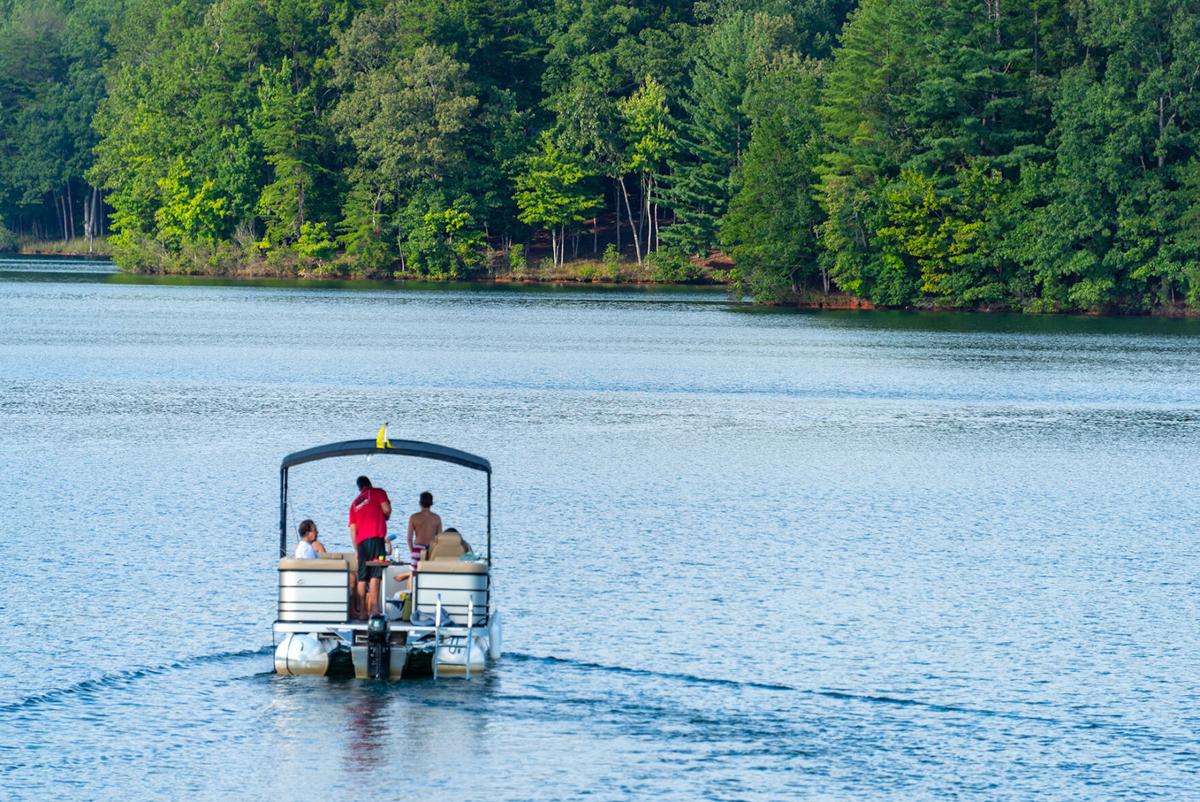 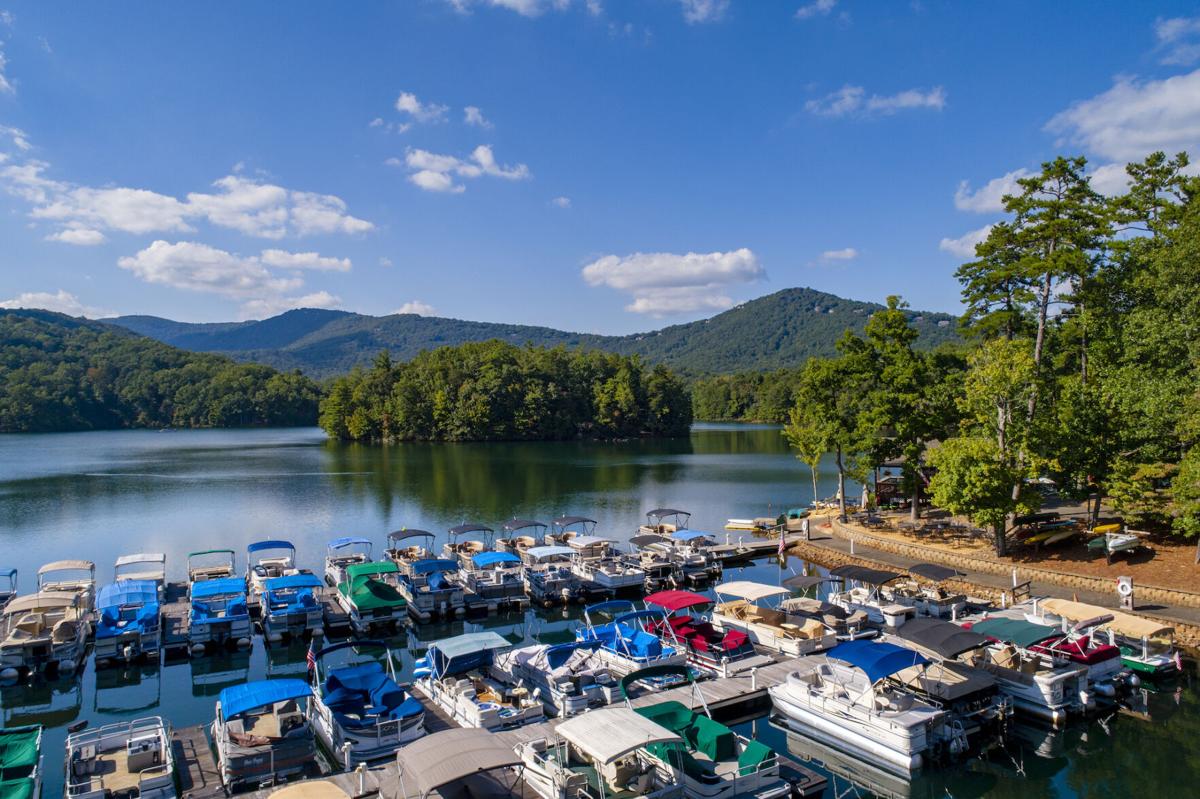 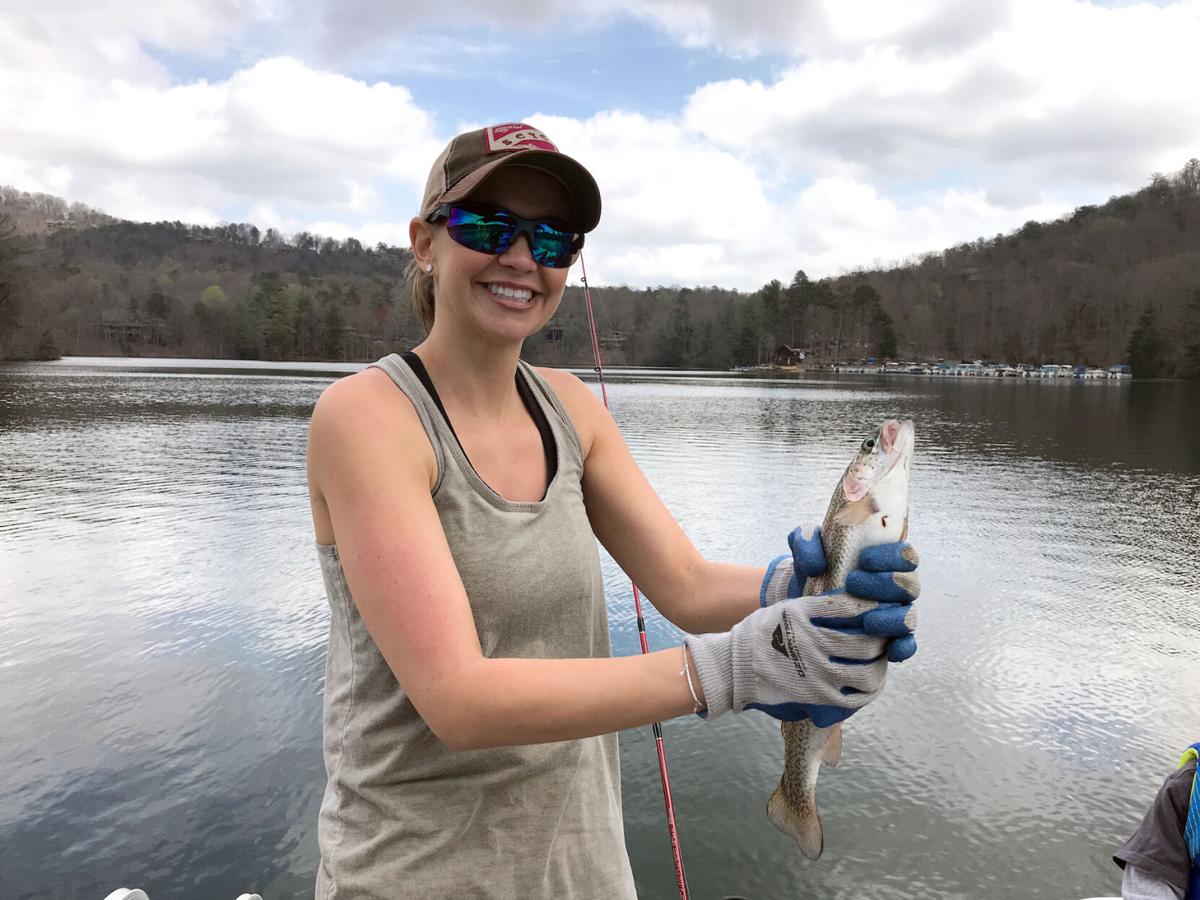 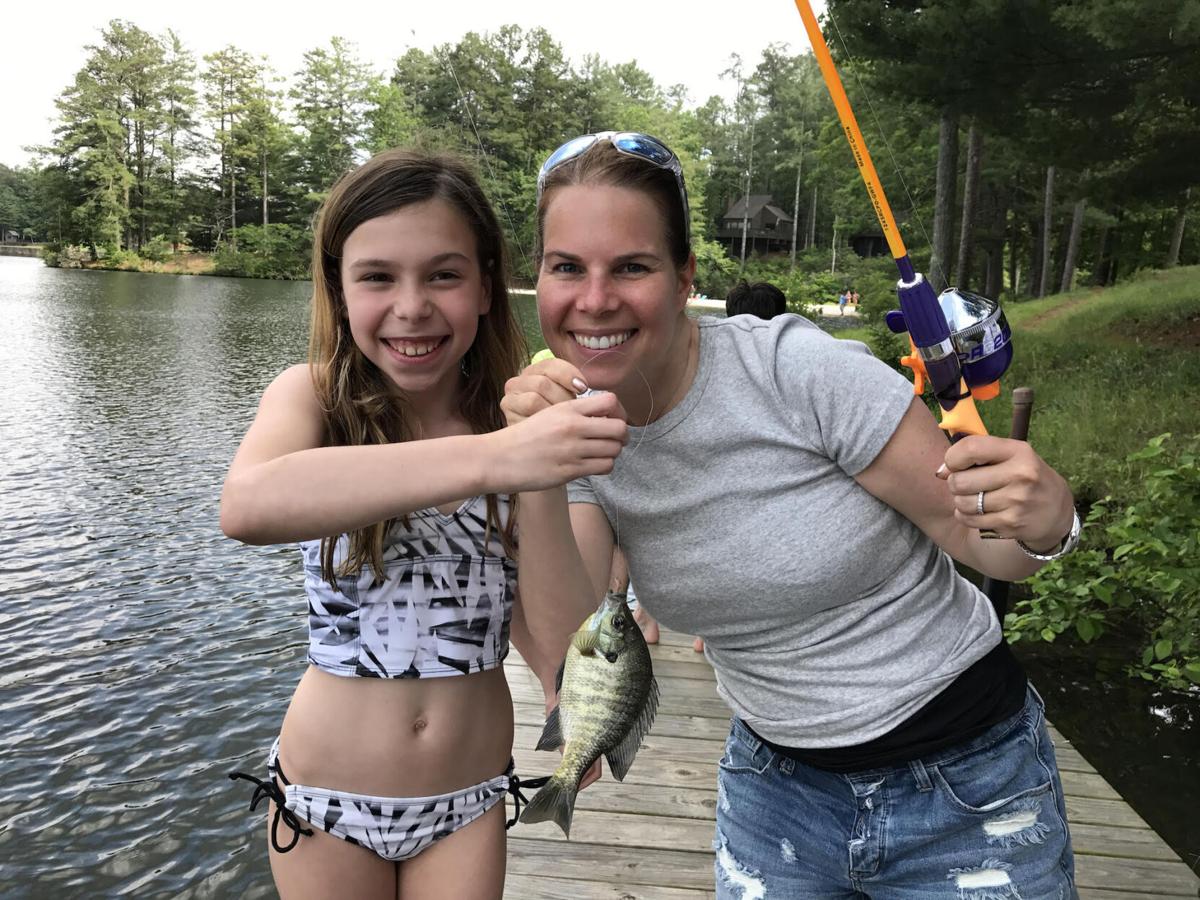 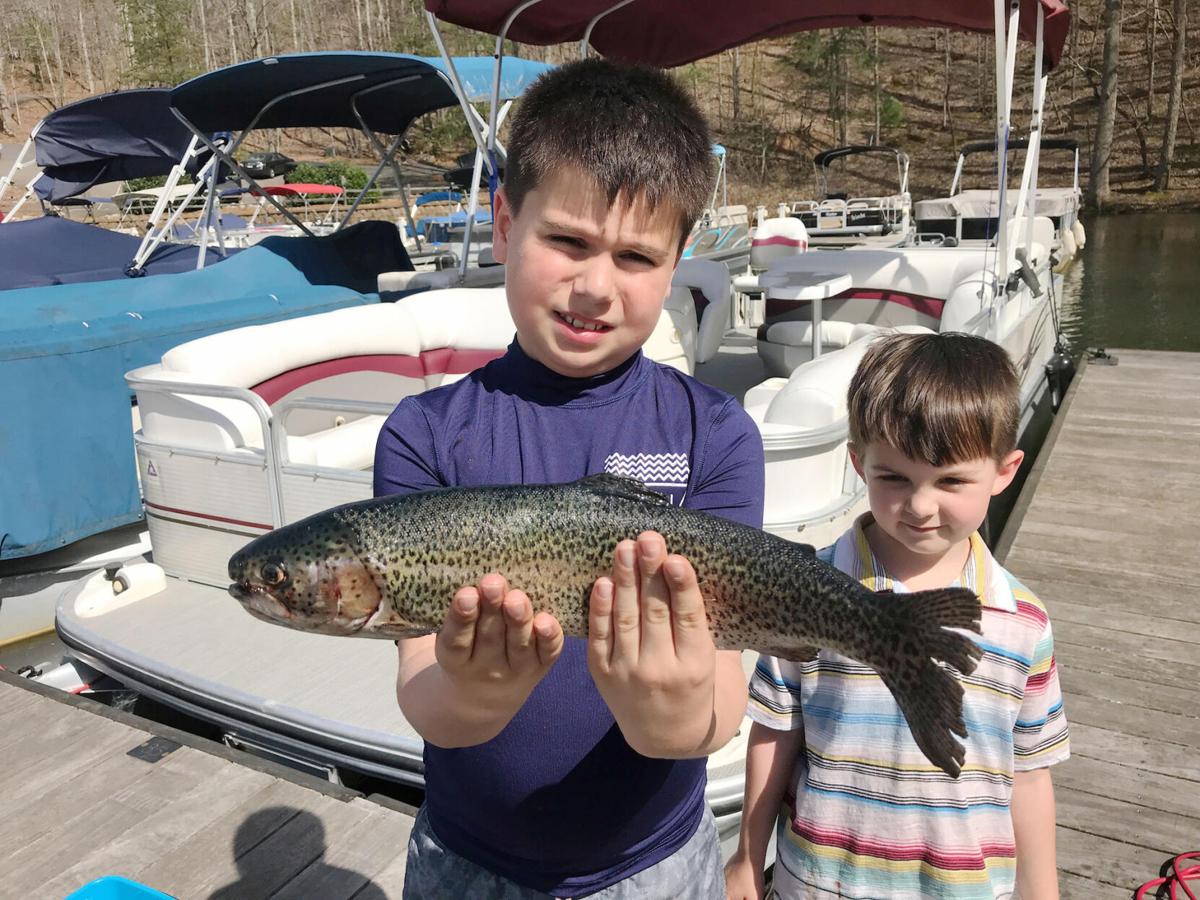 Where do you start to tell the fish tale of the Big Canoe Marina at Lake Petit? Like so many things in Big Canoe, it has evolved. The Marina today has 112 slips for privately owned boats, nine rental pontoon boats and 206 racks for property owners to store canoes and kayaks, primarily at the North Marina. There is a wait list of approximately 100 property owners for boat slips and 30 for canoe/kayak racks. Big Canoers really like the water! If you’re interested in getting on the list, contact the Marina at 706-268-3303.

When Tom Cousins created Big Canoe in 1972, the dam was built to capture all 111 acres of Lake Petit. A lake was created that is 100 feet deep; a central part of that creation was Eagle Island, a place to picnic in the heart of the lake. Eagle Island is now off-limits due to nesting American bald eagles. It is also reportedly home to scads of snakes, so that’s something to consider before putting out the potato salad.

The early days of Big Canoe were vastly different from today’s community. It was originally marketed as a “resort” with very few full-time residents. As the community of Big Canoe evolved, so did the Marina. The first version of the docks was installed in the 1970s and boasted just a small number of boats.

The current boat docks were put in place in 2006 by launching them from the North Marina and towing them across the lake. The docks are held in place by cables attached to massive concrete blocks on the bottom of the lake. This was the start of incremental improvements to the Marina, improvements that continue each year.

In 2013, John Lipkowitz took over as Marina manager. John inherited a small group of pontoon boats that were in rough shape. Using his prior experience in operations and customer service, John started building a team and improving the equipment so property owners could better enjoy their time at the Marina and on the lake. The goal was to become a desirable destination for property owners and guests. To that end, the Big Canoe Marina has evolved to where it now has four main areas of focus.

After surveying the needs of the community and what could be provided at the Marina, John made a proposal to the POA that we “flip the fleet,” which resulted in the purchase of new pontoon boats.

The Marina took possession of seven Veranda pontoons in 2017 and an additional one in 2020. These boats can hold up to 13 people and are popular rentals. The smaller “mini” pontoon boat can hold five people.

The Marina experimented with various watercraft over the years. Stand-up paddleboards were purchased in 2014, Hobie kayaks were bought in 2016, and Hobie peddleboards in 2017.

The Hobie products are being retired in 2021 and replaced with four Perception Outlaw hybrid stand-up paddleboard/kayaks and five Native Slayer peddle kayaks. In 2021, the Marina will offer this selection of watercraft in addition to pontoon boats.

Lake Petit supports a healthy ecosystem for fish and the Marina staff does all it can to support the people who love to fish. Lake Petit is stocked with lake trout, 11,000 pounds in 2020 alone. Over 3,679 individual daily fishing permits were sold in 2020, which helps offset the cost of stocking the lake.

In 2019, the Marina experimented with stocking small 5- to 7-inch walleye to determine if they could survive this far south. Last summer, several fishermen caught walleye of 11-12 inches in length. Apparently the experiment shows promise!

The Marina Shack stocks bait and tackle for sale, along with signature T-shirts.

The Marina manages the leases for the 112 boat slips and the 206 kayak/canoe racks. In 2019 and 2020, a number of kayak/canoe racks were moved from the Main Marina to the North Marina. Eventually, the old wooden racks were replaced with aluminum racks.

In 2018, a kayak dock was added to the North Marina. This dock makes it much easier to launch watercraft.

Fun on the water

The Marina staff works hard to create a fun atmosphere for patrons to enjoy the facility, the lake and the activities often hosted, such as shrimp boils and open-air concerts.

Kids Fish Camp teaches kids the secrets of fishing and discovering fun on the lake. Camp is held twice each summer and packs the kids in for a week of good times on the water.

Often groups gather lakeside at the Marina for casual meetings. Ladies of the Lake, Men’s Cigar Circle and Awesome Women of the Lake (AWOL) enjoy this peaceful setting for chatting and socializing.

There are plenty of tables, chairs and umbrellas that welcome folks to sit a spell and, perhaps, enjoy a picnic. The Marina Shack has a wraparound porch that overlooks the lake. It’s quite a popular place to be when sudden showers appear. Cold drinks are available to purchase. Need ice? There’s an ice machine on property offering bagged ice to go.

The many uses of Lake Petit are managed to meet the desires of boat owners, property owners and guests. Property owners living on the lake are respected with regulations in place to protect their privacy.

Did you know prior to 2012 there was no swimming allowed in Lake Petit? Folks love to jump off a pontoon and swim with the fishes so, by the end of 2014, an officially approved swim area was established. A map showing this designated area can be found in the Marina Shack.

John Lipowitz will be the first to tell you the success of the Big Canoe Marina is directly related to the dedication and talent of his part-time team. These are the oldest and wisest dockhands in North Georgia! We welcome you to enjoy the many things Lake Petit and the Marina have to offer. It’s a place made for good times and a maybe a delicious trout dinner, if you’re lucky.