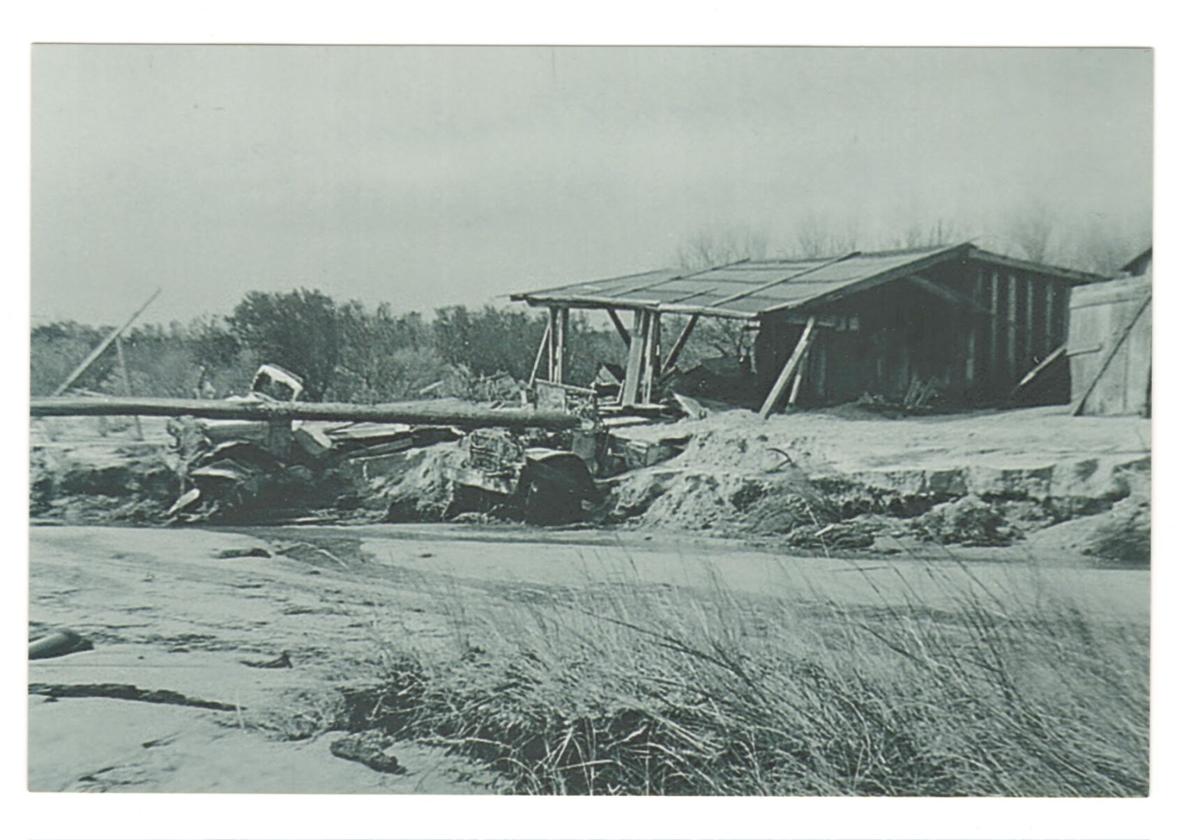 Fitzhugh Munden’s squatter shack after the storm Note the inlet the storm cut in front of his shack and the telephone pole and vehicle washed away from the Coast Guard Station, which is about 100 yards to the right of the photo. 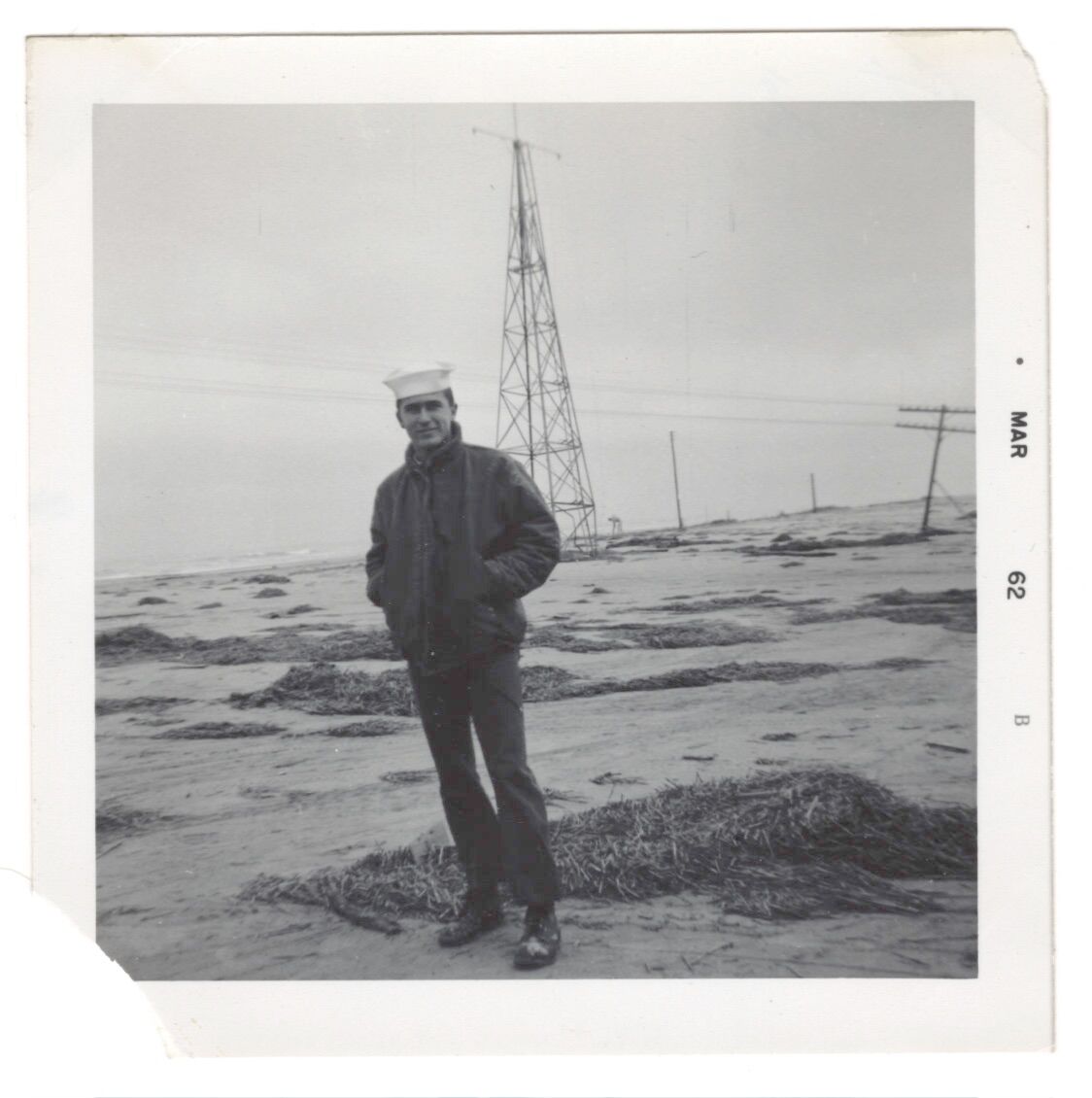 My buddy Don Pollard was the only one left to hold down the Little Island Coast Guard Station (adjacent to Back Bay Refuge) after the remainder of the crew was ordered northward to Chincoteague Island near Delaware line to assist in rescue efforts. This is what was left of their dune system and parade ground. 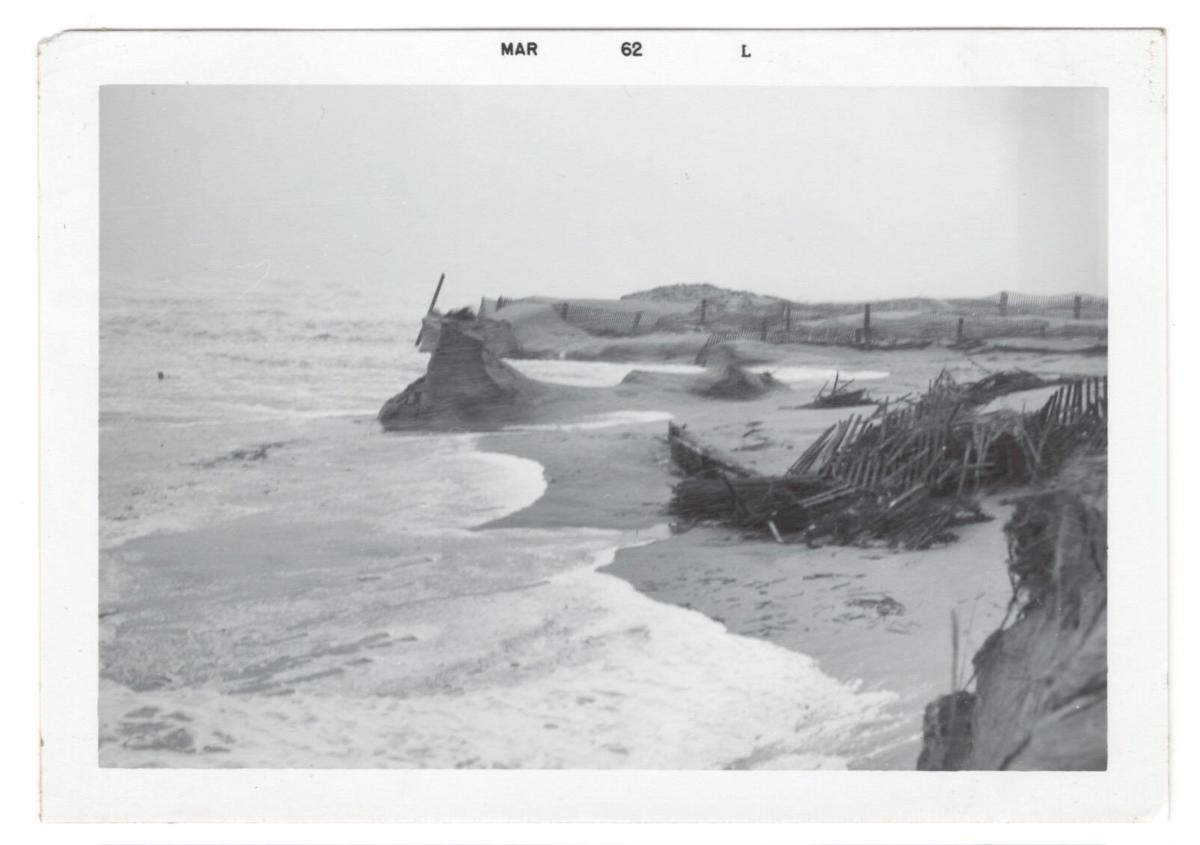 What was left of our previously well-established dune system. Note the piled-up sand fence used to stop blowing sand and thus build dunes. 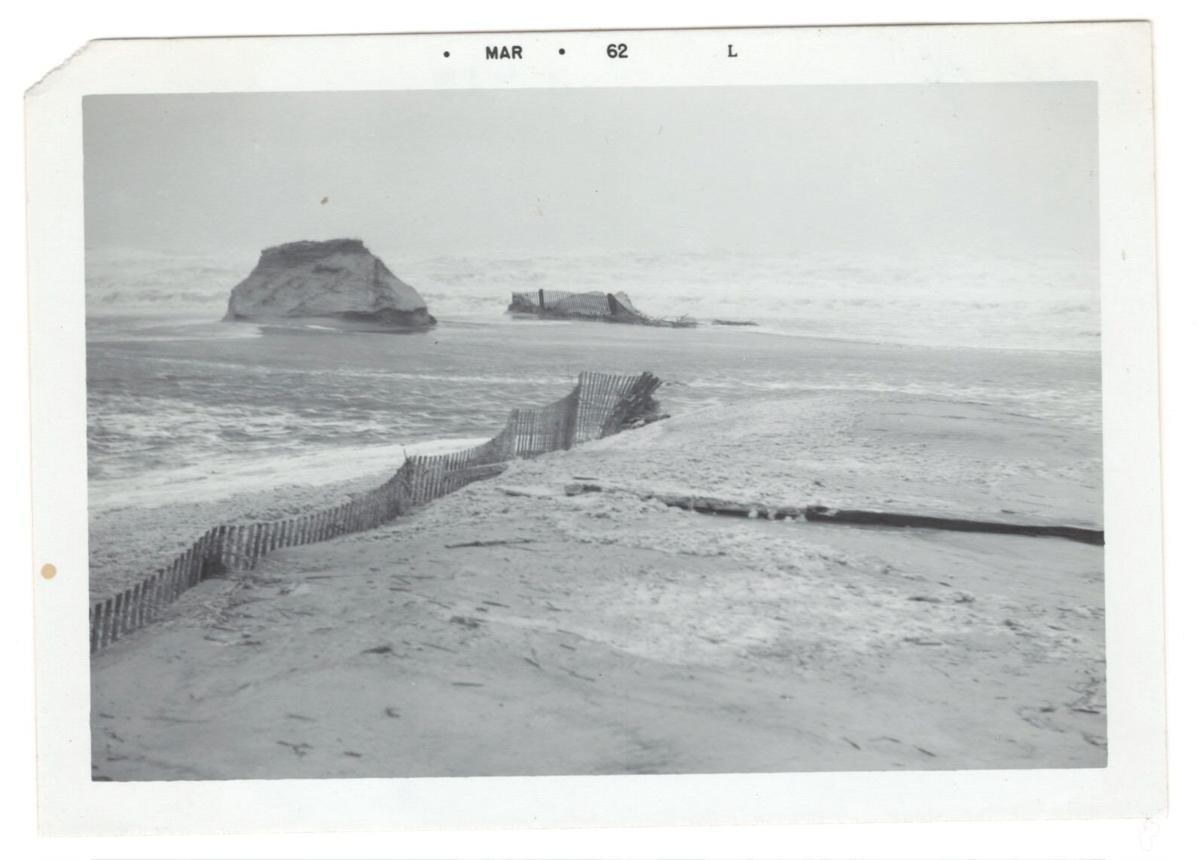 To the right is a line of very old fencing almost totally covered. To the left is the more recent fencing. The dune mound to the left shows just how much sand was washed away. 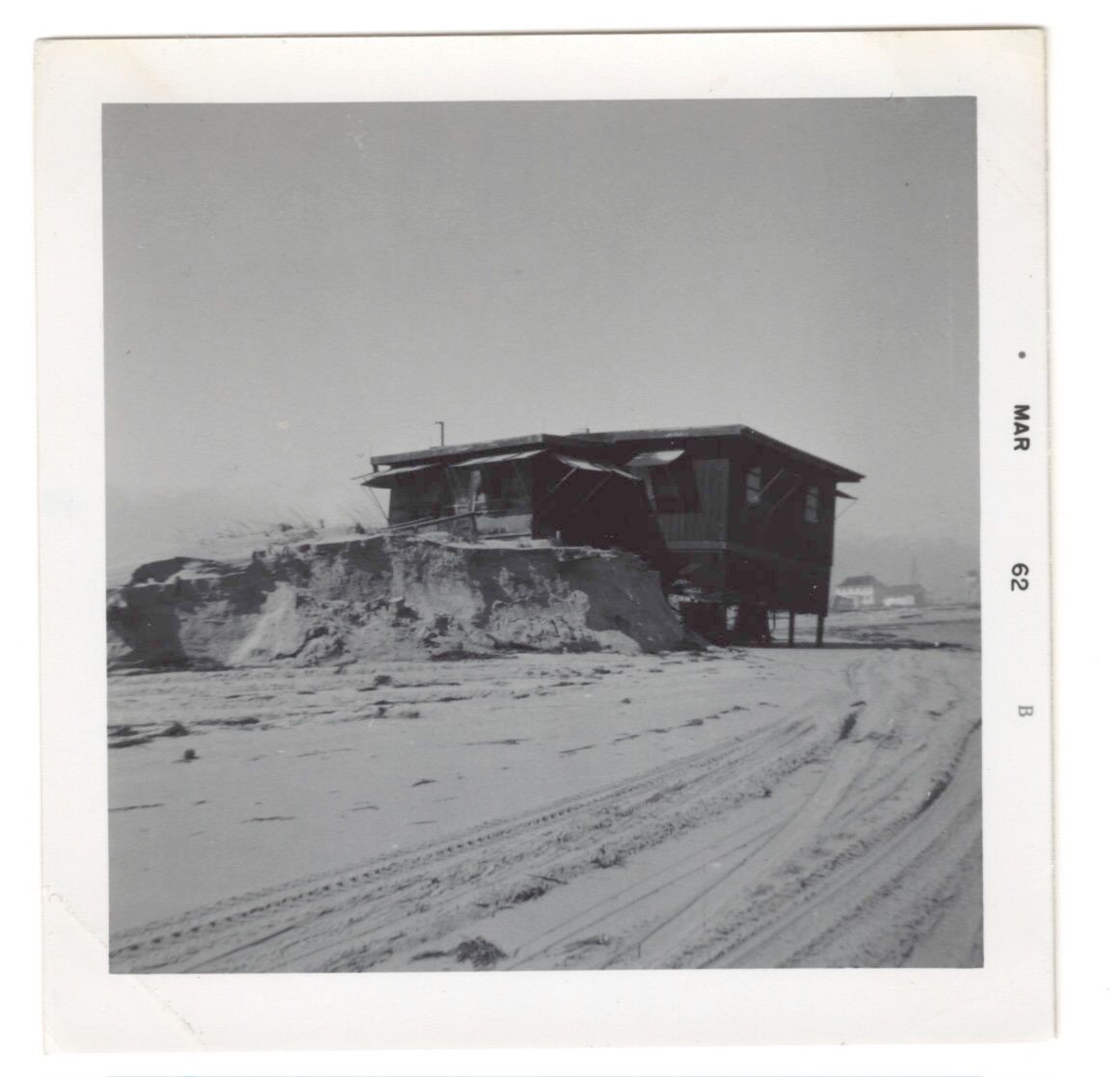 What was left of one of the vacation homes in the small cluster of beach homes known as Sandbridge, five miles north of the refuge.

Gale force winds are common in coastal areas, so when the winds picked up that afternoon, and continued all night, I didn’t think it all that much out of the ordinary. Just another northeaster, even if it was a strong one.

It was 1962, and I was into my second year as assistant refuge manager at Back Bay Wildlife Refuge, my first assignment with the U.S. Fish and Wildlife Service (USFW). My family and I were now living in government quarters at the refuge headquarters, a couple of hundred yards behind the ocean dunes and a few yards from the edge of Back Bay. We were the only ones living there, and it was five miles up the beach to a paved road at Sandbridge.

The wind was still howling the next morning as I drove the 4-wheel drive International truck out the entrance road and up the ramp to the crest of the dunes. I had planned to drive the beach and inspect the damage the storm had inflicted to our dune system. At that moment a wave crashed in and came almost to the crest of the dunes before it dissipated.

Wow! I shook my drowsiness in a hurry. I had been through three hurricanes since coming to Back Bay but had never seen a storm surge like this.

Talk about nature in all her fury. There was no beach, and precious little left of a once substantial dune system. I saw a large dune vegetated with sea oats melt down like a big pile of sugar in a few minutes. I gawked in amazement at one of nature’s more furious onslaughts, and realized man could do nothing to stop it.

Back at the office I was unable to raise the Coast Guard operator so I could not talk to the new refuge manager at his home in Princess Anne but by using our hand-crank phone I was able to contact the Little Island Coast Guard Station, just off our north boundary. To my surprise Don Pollard answered. Don was the youngest guardsman at the station, a fellow Johnnie Cash admirer, a wanna-be country singer and also my guitar picking buddy.

“Don!  Anything left up your way?”

“We’re okay, but the station is a hell of a mess! The dunes that were in front of the station aren’t there anymore. Waves are breaking in the assembly area and at the peak of high tide all buildings were surrounded by water. I’m the only guardsman here. The others were sent up the coast to Chincoteague last night to help in rescue efforts.”

“I had no idea it was that bad. Anything I can do?”

“Fitz made it over to the station, and we’ve got the coffee pot going, so we don’t need anything else. Thanks anyway.”

“We’re okay here too. The dune system in front of us held, but just barely.”

After I hung up the phone I went to the boathouse. The northeaster had blown all the water out of the bay, and the boats were sitting on mud. I readjusted the lines to make sure there was enough slack. With the wind still howling, no office work pressing, and any outside work an impossibility, I decided to take some “administrative leave.”  I built a big fire in the fireplace and my wife Joyce and I spent the day playing with the girls.

Late that afternoon Cindy came running into the living room shouting, “Mama, Mama, there’s a big helicopter in the back yard!” I rushed outside and there was a huge Navy chopper between the house and the boathouse, hovering a few feet off the ground. Don Pollard rappelled down a line and ran over to tell me they were evacuating everyone on the beach to a shelter in Princess Anne.

“Tell the pilot thanks, but no thanks, Don. We’ve got everything we need and aren’t in any danger.”

“Doesn’t matter. Everybody’s been ordered off the beach. He won’t leave without y’all.”

Reluctantly I told him okay, and to tell the pilot to set the chopper down. I would be back with the family as soon as we gathered some diapers and clothes.

A short while later, Joyce and I, along with one-year-old Laurel and four-year-old Cindy, climbed aboard the chopper. I was worried the loud noise and hubbub of the evacuation would traumatize our girls. However, several minutes later after I finished talking with the pilot about the folks that lived farther down the beach, I looked back and Cindy was looking around, calmly taking it all in. And Laurel? Well, she was sound asleep in her mother’s arms.

When we landed at the high school gym the place was alive with displaced people. I called the refuge manager and told him of our forced evacuation and of the damage to the refuge dunes. He invited us to stay at his house, and we gladly accepted.

The next day I called John Sincock and asked to fly with him to better assess damage from the storm. John was a Fish and Wildlife Service biologist who was conducting a long-term study on Back Bay. He was stationed at the Virginia Game and Fish facility on the mainland side of Back Bay.

We flew the area from Back Bay well down into North Carolina, periodically landing the state-owned floatplane on the water and taking salinity readings. The two inlets where the ocean came over near the refuge had already sanded in, but not before a considerable volume of salt water entered the fresh waters of Back Bay.

I wanted to check our headquarters again, but there was still no water within 100 yards of the boathouse. John set the floatplane down on water about 1,000 yards out and taxied to where the mud began. By gunning the engine and applying alternating pressure on the rudder pedals, the plane moved forward on the moist mud all the way to the bulkhead. I jumped out, gave the house and buildings a quick once-over, and we were off again.

Norfolk newspaper reports described just how serious the storm had been. It first struck the Eastern Shore near the Maryland line. Damage was extensive there and the Little Island Coast Guard contingent near our refuge was sent to Chincoteague Island to assist in rescue efforts. Hundreds of houses were destroyed, and several people had drowned. The storm surge even washed some caskets out of the ground.

Authorities concluded three otherwise normal phenomenon came together to cause the disaster. A strong northeaster combined with a normal high tide, plus predictably higher than normal tides that occur during the spring equinox, produced a “spring tide” storm surge far exceeding most hurricanes. Newspapers called the storm “the worst to hit Virginia and North Carolina in recent memory.”

The lower Chesapeake Bay’s major shipping area of Hampton Roads, Norfolk and Virginia Beach made the area south of there especially productive for beachcombing. Those independent souls living on the Outer Banks south of there were always on the lookout for various treasures, especially after a storm. Oil drums, fuel cans and lumber were common finds, but this storm had washed ashore even more unusual finds. I personally found a refrigerator, a freezer (with food still partially frozen), and all manner of household goods. My most unusual finds were a full set of encyclopedias, and a skiff in perfect condition. Unfortunately for me, the owners name, address and telephone number were stamped on a metal tag on the boat’s stern. The skiff had washed all the way down from Chincoteague, near the Maryland line. I called, and a very happy owner drove down and picked it up.

Later, while inspecting some of the over wash areas on the refuge, I happened to see my good friend and former employee, Rommie Waterfield, on the beach. He mentioned the entrance road from the beach into the isolated community of Wash Woods was still flooded out and they couldn’t get out for needed food and supplies. I couldn’t ignore this need, so government regulations or not, I tracked the refuge’s old cable operated D-7 bulldozer several miles down the beach and pushed enough sand into the wash-outs for them to get their vehicles in and out.

While there I learned of a tragic event that happened to one family in their community during the storm. As the waters continued to rise in this man’s cabin during the night, he put his elderly mother on a mattress in an effort to float her out before his dwelling was washed away. She died of a heart attack before he reached a safe location.

Another heart-tugging drama involved Fitzhugh Munden, a fisherman who lived in a squatter shack behind the Little Island Coast Guard station with his Golden Retriever, Sam. Fitz was an interesting guy and I admired his free spirit.

Having weathered many a northeaster, Fitz was not unduly concerned when he went to bed the night of the storm. But he woke with a start when he realized his hand, which was hanging over the side of his cot, was in water! He jumped out of bed into knee-deep water and made his way to the porch. The ocean had cut through to the bay directly in front of his little shack. Completely surrounded by water, and fearing the surge might sweep away his shack, he jumped in the water and waded to a large buoy anchored in front of the cabin. He had salvaged the buoy while beachcombing after a storm several years earlier and thought it would help “beautify” his humble surroundings.  “I held onto the buoy ‘till the tide finally turned, and then I waded over to the Coast Guard Station.”

“How long did you hang on the buoy?”

“An hour or two, I guess. I wasn’t sure I’d make it. It’s a hell of a feeling hanging onto a buoy out in the water in the pitch-black, and the wind blowing a gale. But once I got to the station though, Pollard and me made us a pot of coffee and just sat back and waited her out.”

“What happen to Sam during all this?

“Lost tract of him while I was hanging on the buoy. All I know is he was sitting by what’s left of the shack when I got back after our evacuation. Sure was glad to see him alive, and boy was he glad to see me.”

A few days later Sam’s picture was in the Norfolk newspaper, along with yet another human interest story about the great Ash Wednesday Storm of 1962.