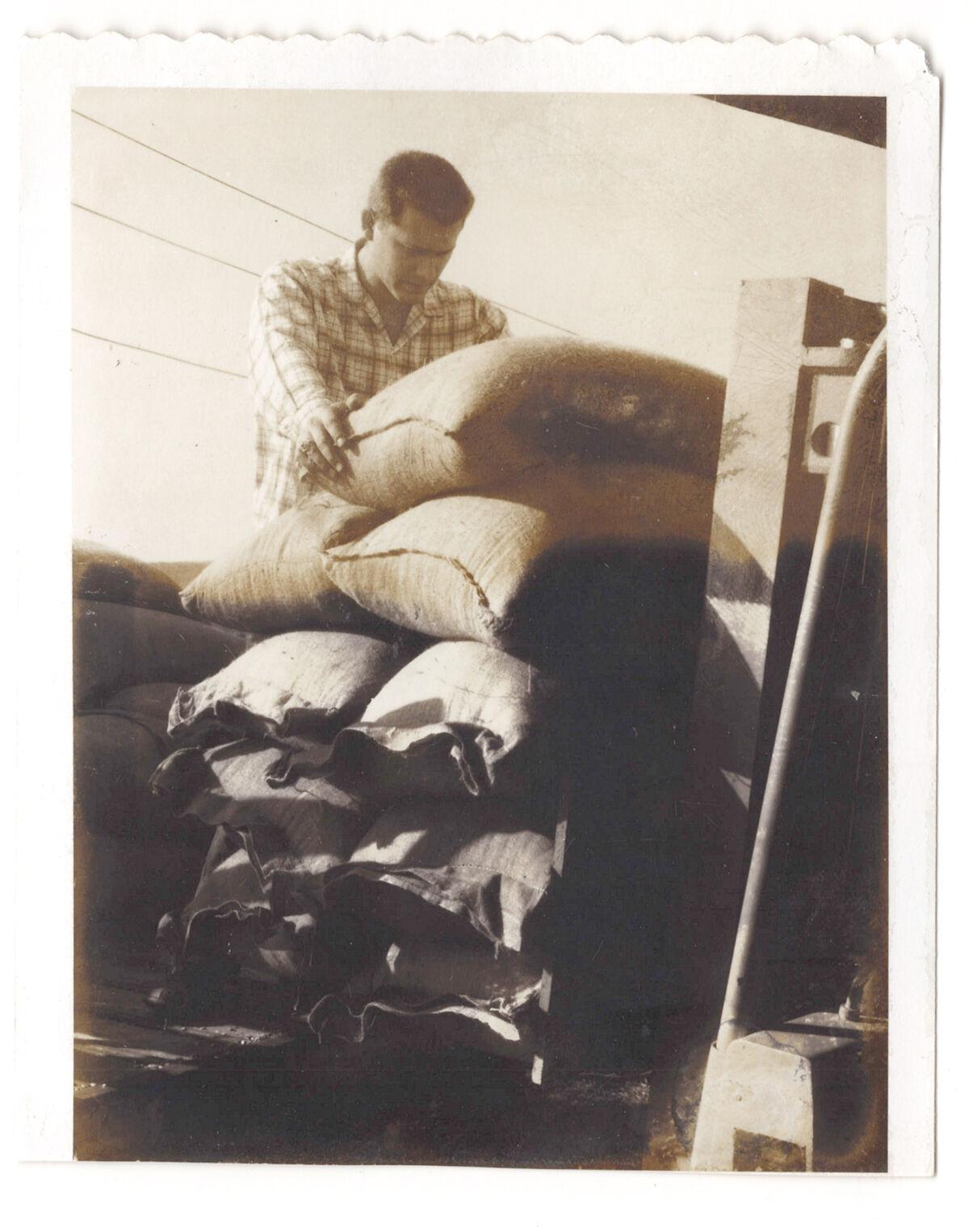 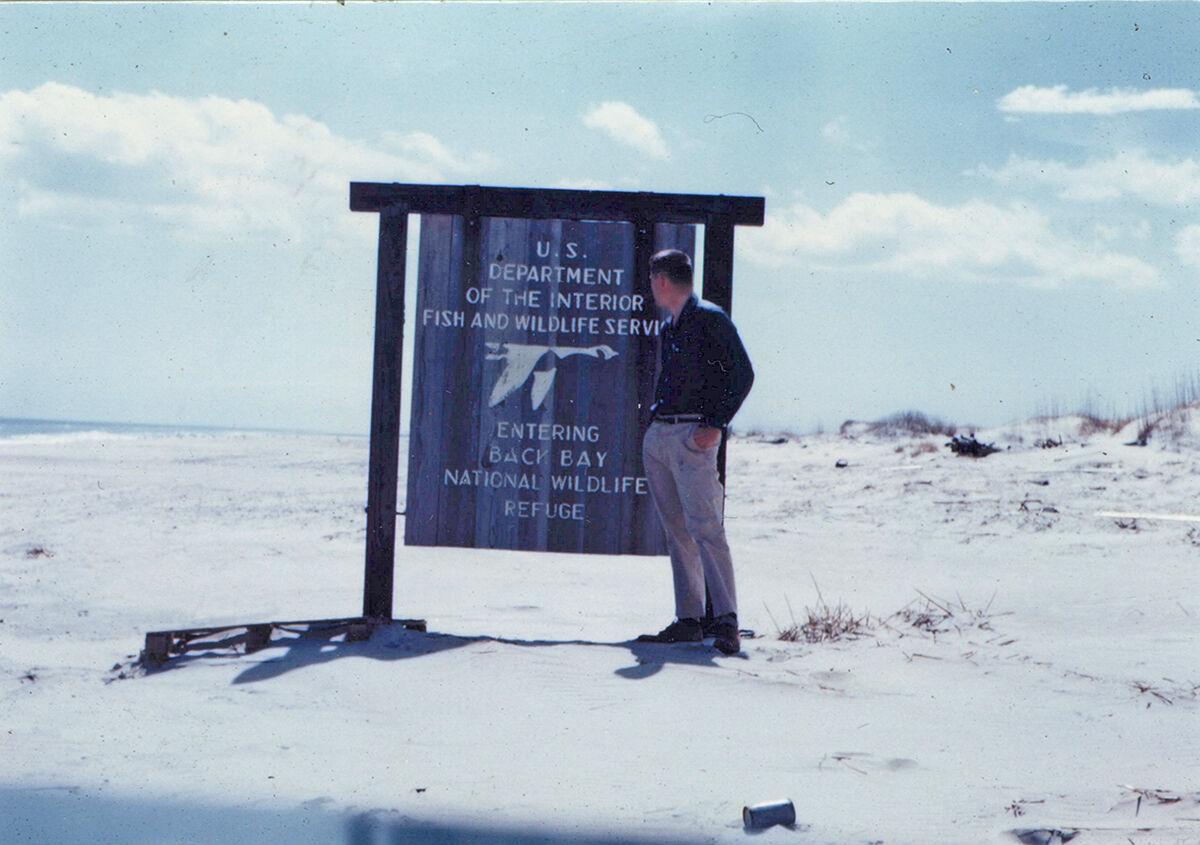 McDaniel standing by the refuge entrance sign on his first day of duty with the U.S. Fish and Wildlife Service. 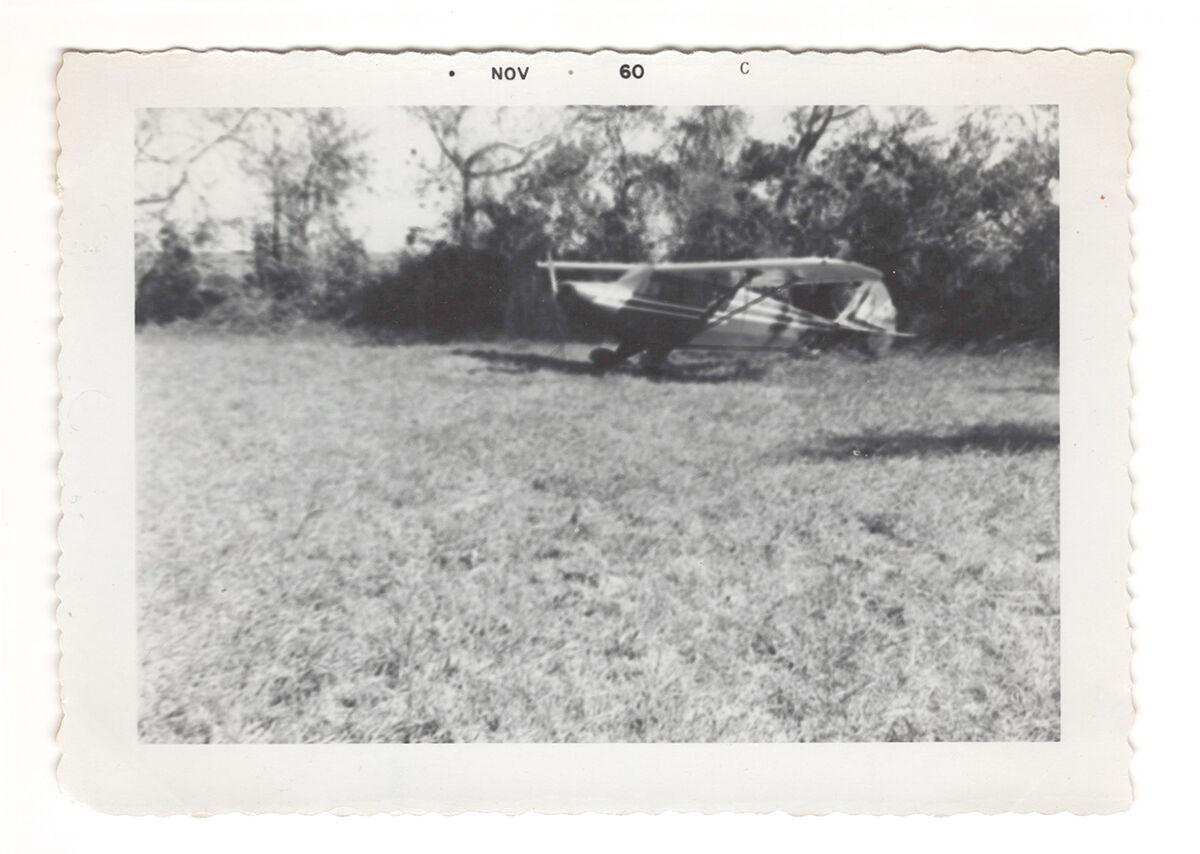 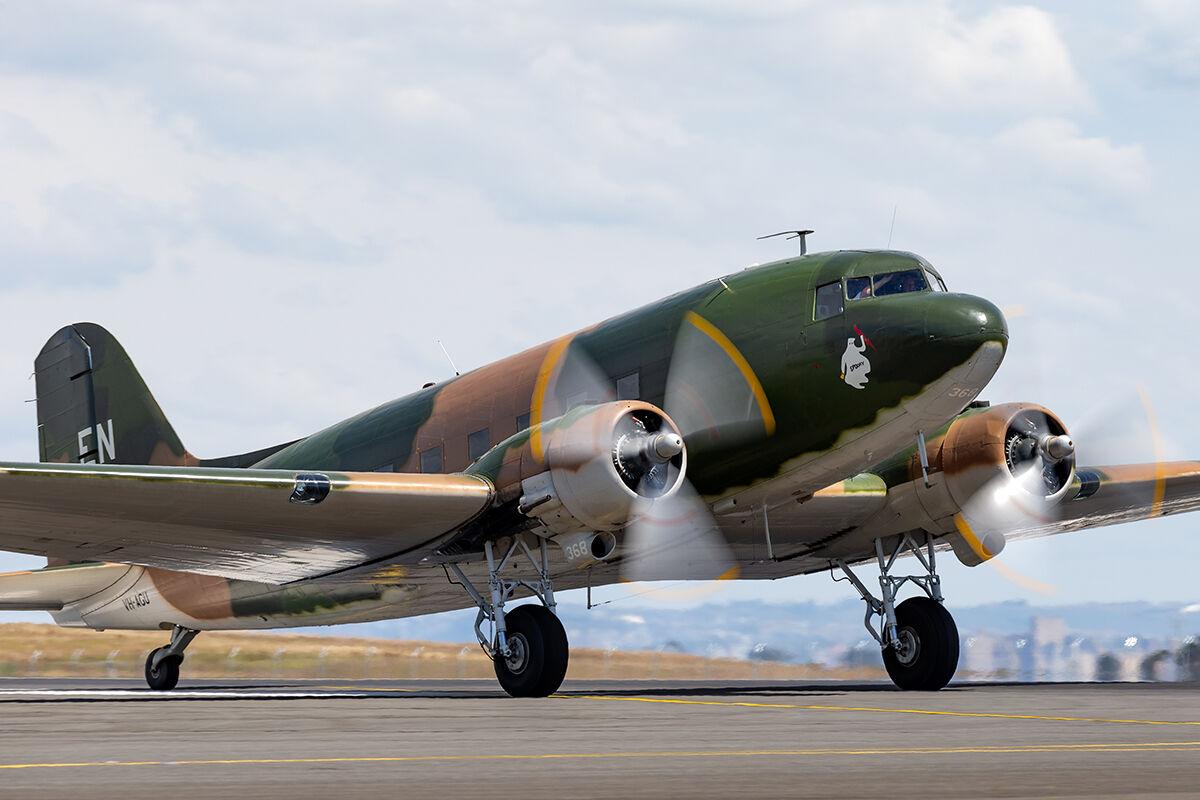 A C-47 like the one used to dump the corn (except for the camo paint job).

A C-47 like the one used to dump the corn (except for the camo paint job).

Whenever Back Bay froze over, heavy winds or a thaw usually broke up the ice within a week or two. This freeze, however, turned out to be more tenacious.  It had lasted almost a month, and waterfowl were dying of starvation in substantial numbers.

Snow Geese were especially hard hit. They fed on roots and tubers of marsh plants, and the marsh was frozen solid. Waterfowl that fed on aquatics kept some holes in the ice open by their activity.

Farther south, Currituck Sound was ice free, yet thousands of waterfowl on the wildlife refuge chose to remain. Wildlife personnel were finding hundreds of dead Snow Geese and other waterfowl in agricultural fields and on iced-over Back Bay. Bald Eagles and Great Back-backed Gulls found the weakened waterfowl easy pickings.  Carcasses were a common site.

Something had to be done.  State and Federal Wildlife agencies decided it was time for drastic action.

It was 1961, the first year of my career with the U.S. Fish and Wildlife Service. My first assignment was assistant manager of the Back Bay National Wildlife Refuge—9,000 acres of fresh marsh and open water on the Outer Banks of Virginia, near the Carolina line.

The drastic action we finally took was to get the Department of Agriculture to donate a railroad boxcar load of corn for an emergency relief effort. We hadn’t figured exactly how to get the corn to the birds yet, but we’d think of something.  Maintenance-man Rommie Waterfield and I began hauling tons of corn down to the refuge from Norfolk in our 1949 Diamond Y, 2 ½ ton truck, by driving on the low tide beach.

By this time “Starving Waterfowl” were making headlines in the papers and on the evening news. The Naval Air Station in Norfolk called and asked if we could use one of their C-47s in the relief effort. We jumped at the offer and hauled the remainder of the corn to the air station. One of the innovative Navy mechanics designed and riveted a hastily made device out of aluminum, which served as the “funnel” to shoot the corn out the open rear hatch of the airplane.

Refuge manager, Carl Yelverton, and I arrived at the naval base early on the morning of the planned drop.  A cameraman from a Norfolk TV station also showed up, ready to film the unique event.

We stacked the pre-bagged, two-bushel gunnysacks up and down the length of the C-47, from the pilot wall to within a few feet of the rear hatch, where the door had been removed.  The planned routine was to fly down to Back Bay, 20 miles to the south and begin a tight banking turn over one of the big openings in the ice where the waterfowl were concentrated. When the C-47 was over the ice hole, we quickly dragged the sacks of corn aft to the hatchway, cut open one end and handed it to another man who dumped the corn into the collection portion of the funnel.  The slip-stream sucked it all out in a split second.

As a precaution, the person dumping the corn into the funnel had a rope around his waist tied to the bulkhead to prevent being sucked out the hatch during the rather bumpy flights. When all the sacks had been dumped, we flew back to the base and loaded up again.  This routine went on until the corn supply was exhausted, which took several sorties to accomplish.

We were on TV that night, but the coverage was skimpy. As it turned out the flights were very choppy and the cameraman threw up before he got any actual footage of corn going out the funnel. Most of the coverage consisted of pre- and post-flight interviews with us, and shots of the plane.

The next day was Saturday; Carl decided he and I could spend the day dumping some of the corn stored on the refuge from his personal aircraft—a nice fabric covered Super Cruiser. The only trouble was his airplane was kept tied down on Long Island, about a mile across mainly open bay from the boathouse. We hadn’t been able to fly any since the big freeze because of the inaccessibility of his plane. But I should mention here, in addition to being a perfectionist, Carl was also a man of determination.

“How’re we gonna get to your plane, Carl?”

“We’ll walk on the ice to Long Island.”

“You ever walked out on the bay ice before?”

“Yeah, I think its thick enough to hold us up.”

“But, what if, just by chance, it’s not strong enough to hold us, and we break through?”

“Oh, I’ve thought of that possibility. That’s why we’ll push the skiff along on the ice as we go.  If the ice cracks and we break through, we can pull ourselves into the boat.”

“Oh, okay.  That sounds like it’ll work,” I said, as if it were a perfectly logical thing to be doing on our day off.

We put a container of aircraft fuel into the skiff and started walking on the ice towards Long Island, holding on to the boat as we went.  All went well, except every now and then our weight caused a pressure crack in the ice. We could see the crack shoot out for a hundred feet or so.  The noise sounded like a 30-06 rifle and scared the peewally out of us.  We looked at each other for a moment, and then a half grin came on Carl’s normally somber face.

“You mighty right it did. What was that?”

“Nothing but a pressure crack. Happens now and then.  Don’t think there’s anything to worry about.”

“Maybe not, but I’m ready to roll over into this boat if you’re wrong.”

The next time it happened it didn’t scare us nearly as bad.  We finally made it to the island without breaking through, a bit hyped, but ready for the adventure ahead.

After a safety check and servicing the aircraft, we jumped into the two-seater, taxied down the 10-acre fescue pasture that served as a runway and took off.  Three minutes later we landed on the smooth ebbing tide beach, 300-yards in front of headquarters. We had about six hours before the making tide would shut us down.

We had to work fast.

While Carl was taking off the airplane’s door, I hoofed it over the dunes, loaded the Jeep pickup bed with corn and drove it back to the beach; parking at a spot where we could conveniently taxi the plane to for loading.

I got in the aft seat and buckled the seat belt as tight as it would go. Carl put one sack of corn between my legs and another in my lap, on top of the first. Each bag held two bushels, and a bushel of corn weighs 54 pounds, if I remember right. The second sack, wedged between the back of the front seat and my chest, made things pretty cramped, hardly leaving enough room to move my arms.

After a quick sip from his trusty thermos, Carl climbed in the cockpit and fired her up.  A short taxi down the beach into the wind and we were airborne. Brar?? was it cold with the door off!  We climbed to about 200 feet on the way to the hole where the waterfowl were concentrated. Before taking off we had worked out the procedure for how this whole thing would unfold. With a gunnysack in my lap, I couldn’t see Carl’s head and with the open doorway the engine and wind noise were excessive.  I could barely hear Carl shout “Get ready!” over the roar.

That was my signal to slit the top of the first bag, then transfer the pocketknife to my mouth and hold it there between my teeth while I grabbed hold of the two bottom corners of the sack.  Once I had a firm hold on the sack, I shouted back through clenched teeth, “Ready!”

On that signal Carl moved the stick hard to the right and pushed the right rudder pedal hard.  The right wingtip dropped straight down, a full 90 degrees to the horizon, and the Cruiser went into a tight right-hand turn. Looking straight down out of the door opening, all I could see was an open hole in the ice and ducks and geese flaring from the noise of the plane.  I dumped the first sack, careful to remember Carl’s earlier admonition that would prevent our certain death.

“You be damn sure you don’t let go the sack after it empties. You do and sure as Hell it’ll catch on the horizontal stabilizer. And if that happens, I’ll have no control. We’ll just be a memory.”

Holding on was harder than I thought, because I had to push the sack out the open hatch to fully empty it. When the slipstream caught the empty gunnysack, it slipped from my left hand and started flapping against the side of the plane. My heart skipped a beat!

Luckily, I held on with the other, dragged the empty sack back inside and wedged it behind my back. While Carl kept the plane in a tight turn on its wingtip, I slit the second bag, dumping it in the same manner –but holding on even tighter.

After patting Carl on the shoulder that I was clear, we headed back to the beach. There were birds in the air everywhere we looked, and we both stayed busy keeping a sharp lookout, passing ducks and geese right and left, a few hundred yards off our wingtip.

We kept this up for the next several hours until our low tide landing strip was overcome by the incoming tide. Our routine was broken only by breaks long enough for a few quick drags on a Pall Mall (can’t believe I smoked back then), and a few sips of coffee from the thermos.

After the last load we put the door back on the plane and took off. But since it was our day and the work was finished, Carl wanted to relax and enjoy the scenery. We climbed to 8,000 feet, and he cut the engine. The sky was turning orange in the west and skeins of geese were on the move. What a sight!  He even let me have the stick for a while.

In absolute quiet, except for the wind noise through the struts, we glided all the way down to a perfect dead-stick landing back on Long Island. It had been a tiring, but exhilarating day.  Looking back, it was kind of fun—a little dangerous maybe, but not too much.  Just enough to make it exciting.

The bay thawed a few days later. The official estimate was over 1,000 waterfowl died during the big freeze up.  We didn’t know if our feeding effort saved many waterfowl, but we like to think it did. At least we made an effort. And as my old wildlife professor liked to say, “Do something—even if it’s wrong!”

Travis McDaniel graduated from the University of Georgia in 1960 with a major in wildlife management, and immediately began his career with the U.S. Fish and Wildlife Service. The first half of his career was on five different refuges, all in the Southeast. The last half was in the regional office in Atlanta supervising the field stations. In this monthly column he will share some of the more exciting events he experienced in his 34-year wildlife career.