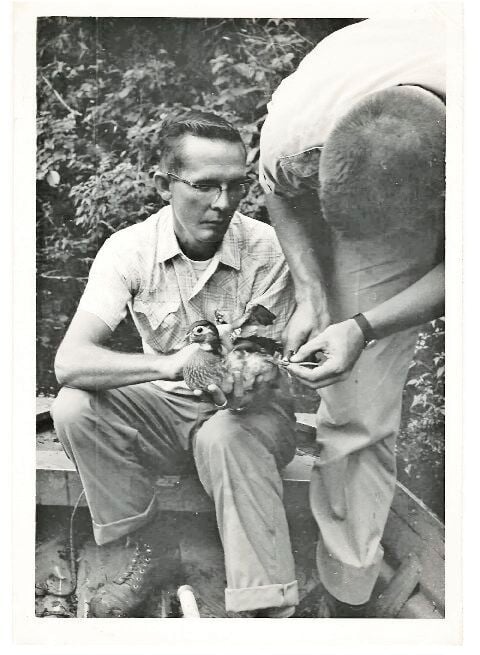 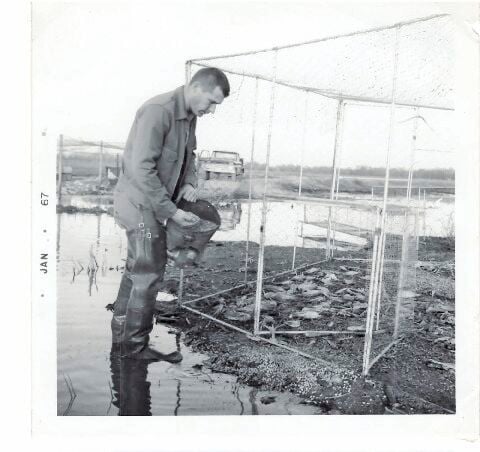 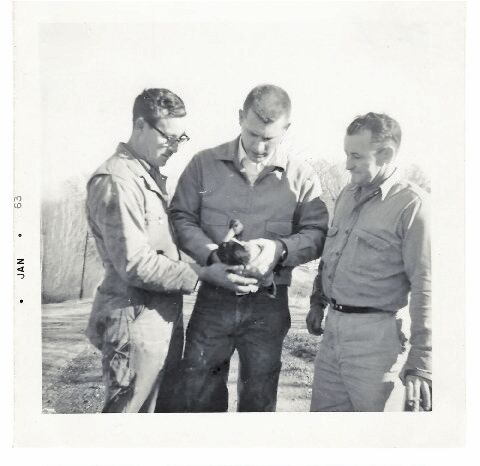 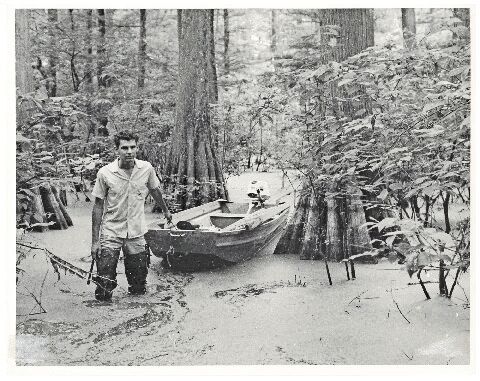 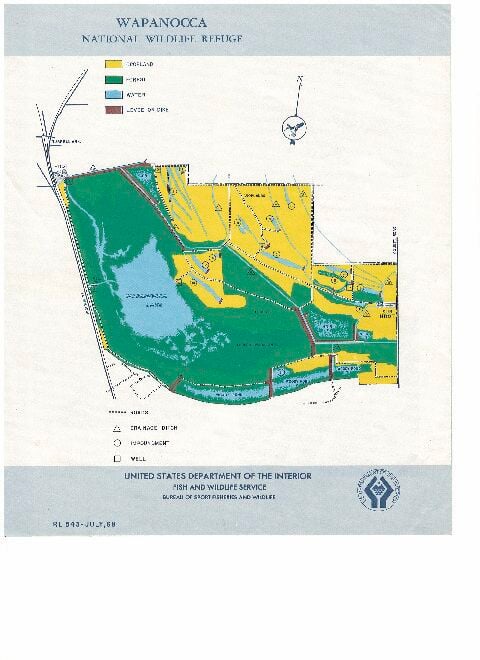 In spite of freezing temperatures, the 10 horse Johnson outboard kicked off on the second pull. While the motor warmed up, I put the bird banding supply box in the aluminum Jon boat along with a pair of binoculars and a boat paddle. I pulled away from the dock and unscrewed the drain plug so the rainwater in the boat can drain once underway. Twisting the grip to full-throttle, I fly up Wapanocca Bayou flat out, breaking the thin sheet ice in front of me.

Saturday is a day off but with duck banding traps to be tended twice a day that doesn’t matter. A mid-morning run takes care of ducks caught during the more productive morning feeding hours and an evening run assures no ducks will be left in the traps overnight when they would be easy picking for racoons.

Those familiar with the Delta know it doesn’t offer much in the way of stimulating pursuits except hunting and fishing, so I take advantage of any opportunity for excitement that presents itself. Excitement is where you find it and I learned to make my own by perking up a couple of routine refuge activities. One of these is driving the military surplus Jeep as fast as I can—with the canvas top off and the windshield down—on narrow refuge levees and winding, two-rut roads through the woods. Even more fun is running the Jon boat wide open through the twists and turns of Wapanocca Bayou as it meanders through a beautiful cypress swamp to 600 acres of open water that is Wapanocca Lake. The outboard’s speed isn’t earth shaking, but on a 14-foot Jon boat it’s enough for a minor rush.

Steel gray overcast skies and a brisk breeze make me glad I’m dressed warmly in insulated coveralls and hip boots. As the boat speeds along, I think how great it is to be alive and have a job that allows me to do these kinds of things. A misty spray of icy water is hitting me in the face and my lungs are sucking in the chilly morning air.

Ah…there’s no other place I’d rather be at this moment!

As I break out of the bayou into the open water of Little Lake, I notice there’s still ice around the lake’s edge. The middle of the lake is open with just a hint of slush ice. I also see I’ve surprised a flock of Ruddy ducks. Now Ruddies, like all diving ducks, can’t just jump into the air like Mallards and other puddle ducks. They have to run on the water for some distance before getting up enough speed to fly.

I mentioned earlier about creating your own excitement, and the opportunity to chase these ducks is too strong to resist. The devil must have made me do it. Still going wide open, I fall in behind the closest ones. Half flying and half running on top of the water, the comical looking Ruddies try desperately to escape the noisy monster relentlessly bearing down on them.

Diving ducks get airborne fairly fast if they have open water in front of them, or can get far enough ahead to dive and escape their pursuer. I’m pressing these Ruddies hard, and pushing them towards the willows on the east edge of the lake. Some get airborne, and some dive, but many others are still running on top of the water. I’m close to overtaking some stragglers when I realize I’m about to overshoot the cut-off through the buttonbush into where my first duck traps are located. I immediately give up the chase, but without cutting back on the throttle enough shove the steering handle all the way to the right for a 90-degree left turn into the narrow cut. Isn’t it puzzling how your mind seems to go blank in an accident?

The next thing I know I’m erupting from the icy water, gulping for air! Although I have no recollection of it, I know exactly what happened. The flat-bottomed boat skipped across the water sideways, like a flat rock skips on water. On one of those skips the side caught too much water and the boat flipped over faster than you can say Jack Robinson. I sailed through the air like a circus acrobat shot from a cannon. Flat-bottomed boats don’t dig into the water on a tight turn like a “V” bottom boat will. However, analyzing what had gone wrong isn’t on my mind. The ammunition box containing my banding tools is floating a few feet away, as is my binocular case, the boat paddle and the seat cushion. I’m standing in waist deep water, broken ice chunks bobbing up and down, and the boat upside down five feet away.

I quickly come to my senses, grab up all my equipment, turn the boat over and pull on the start rope—knowing there’s no way it’s was going to start. Naturally the drain plug fell out when I flipped. I know I have to act fast.

I push the boat to the edge of the buttonbush, take the motor off, and wedge it in some limbs. Then I raise the bow of the boat up on some willow limbs and pushing from the stern, shove the boat as hard as I can. That gets all but the last foot or so at the stern out of the water. I jam a dead limb into the drain hole as tight as it will go, and pull the boat off the willows. Then, I roll into the half-swamped boat, get on my knees and begin to paddle for the west side of the lake, and high ground.

A stiff breeze is blowing directly against me, chilling me to the bone. I’m getting colder by the minute. After a few minutes, it’s apparent I’m not making much progress. I quickly put a fleeting thought out of my mind that I might not make it to the other side. If I’m going to make it, I have to do something different. What I need is a plan “B”.

It’s hard to believe, but the wind actually makes me feel colder than when I was in the water. So, with about half the distance across Little Lake still to go, I slide over the side into the chest-deep water. Holding onto the stern, I begin to push the boat towards the cypress trees to the west, and out of this predicament. I get a little antsy at one point when the water reaches neck deep, but after I cross the main channel, it gradually becomes shallower again. As difficult as this is, I’m making better progress than when I was in the boat trying to paddle. All I have to do is tough it out and I’ll make it.

I finally reach the cypress trees bordering the lake. When the water gets shallow enough, I tie the boat to a willow and abandon it. Miring slightly in the mucky bottom, and using the paddle to lean on and help break up the ice in front of me, I make my way through the cypress, buttonbush and willows towards high ground, about a quarter mile away.

When I finally make it to high ground, and the dirt road near the refuge boundary, I’m greatly relieved, but my ordeal is not over yet. It’s still about a mile from home, gas heat and warm clothes. Although by this time I’m numb all over, my pride won’t let me go 100 feet farther to the highway for help. As long as I can still move, I’m not about to let anyone see me until after I get out of this mess.

I’ve lost all feeling in my hands, which make them almost useless. I can’t pull my hip boots off to drain the water out, so I roll them down to the knee, lean against a tree and raise one foot at a time enough to let some of the icy water drain out. Hypothermia still concerns me, so I commit to making the final leg of my odyssey without stopping. I’ve got to keep moving. I’m in good shape and still young enough to think I’m bulletproof. I figure I can make it now, if only by sheer will power.

For what seems like an eternity, I slog homeward listening to the weird “squishing” sound my numb feet make each time they hit the ground. Even though my heels are probably being rubbed raw by the friction, I can’t feel a thing. After a grueling jog in an almost hypnotic daze, I make it to the old clubhouse, thankful my wife and kids are in West Memphis shopping. If I can keep it together a little longer, I might get out of this whole mess without her ever knowing.

Both our residence and office are in the old clubhouse. I’m glad I don’t keep the door locked otherwise I’d never be able to get keys out of my pocket with hands too numb to respond. All I have to do is turn the doorknob and I’d be inside but my hands are so non-responsive that proves to be impossible. Finally, by getting down on my knees on the front stoop and interlocking the fingers of both hands, I’m able to turn the doorknob and open the door.

After finding the kitchen matches, I begin the difficult task of trying to light the little gas heater in the office. With little control over my shaking fingers, I can’t make them work well enough to strike the matches. I eventually come up with the idea to hold the wooden match in my teeth and run it against the striking portion of the matchbox to light it. This works better than I think, once I get the knack of it. However, I use up about half the box before successfully shifting a burning match from my teeth to my numb fingers, and then to the gas jets before it goes out. It’s a simple action, but not when fingers won’t respond. But perseverance pays off and I eventually make the connection. After another difficult ordeal I’m out of my hip boots and into dry clothes.

It takes a good while to thaw out, and the process is not pleasant. The pain intensifies as feeling returns to the extremities. However, once my teeth quit chattering and feeling returns to my shriveled fingers and toes, I’m pleased to see I’m almost back to normal. I’m also surprised my puckered feet and heels aren’t completely raw. Heavy socks evidently helped.

Considering what I’ve gone through, I feel pretty good. And although I was a temporary annoyance to the Ruddy ducks, they’re none the worse for wear. But if ducks can communicate among themselves, I suspect the Ruddy ducks are out there now gossiping with the Mallards about how I got my comeuppance.

Not long after I get into some dry clothes, and hide the wet ones from my wife, our car pulls into the driveway. I quickly sit down behind the office typewriter, pick up some paperwork and try to look busy.

“We’re back from shopping,” Joyce shouted through the front door. There’re a few things in the car I need you to bring in for me. What’ve you been doing while we’ve been gone?”

Later that day, after swearing my maintenance man to silence about the incident, we ran the duck traps and rescued the boat and motor. It was several decades before I told Joyce what happened.