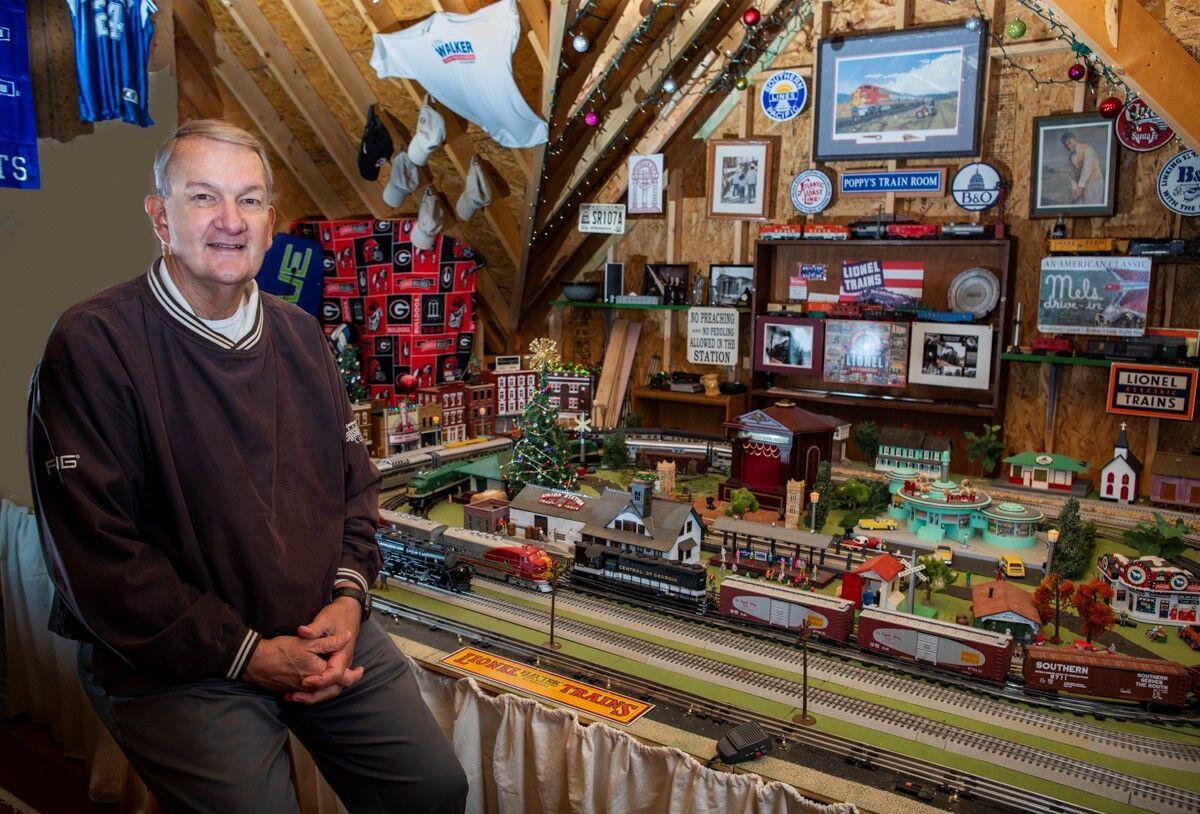 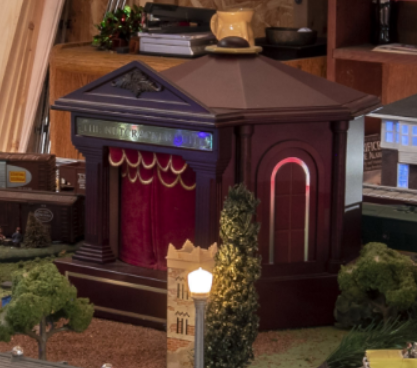 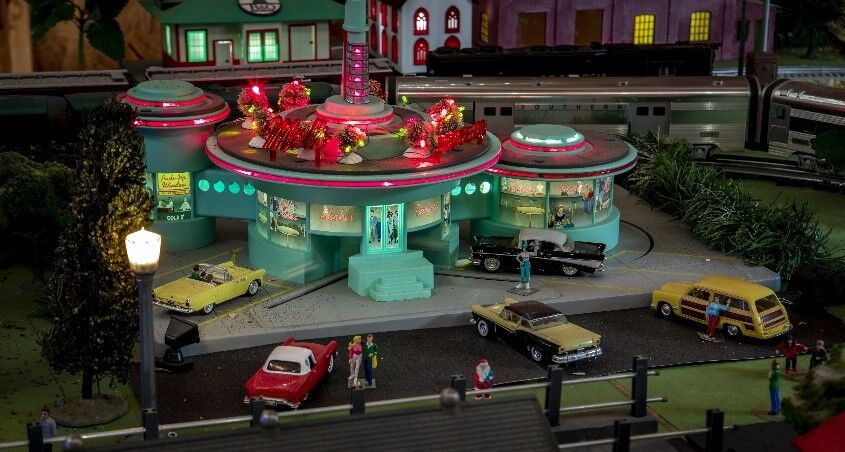 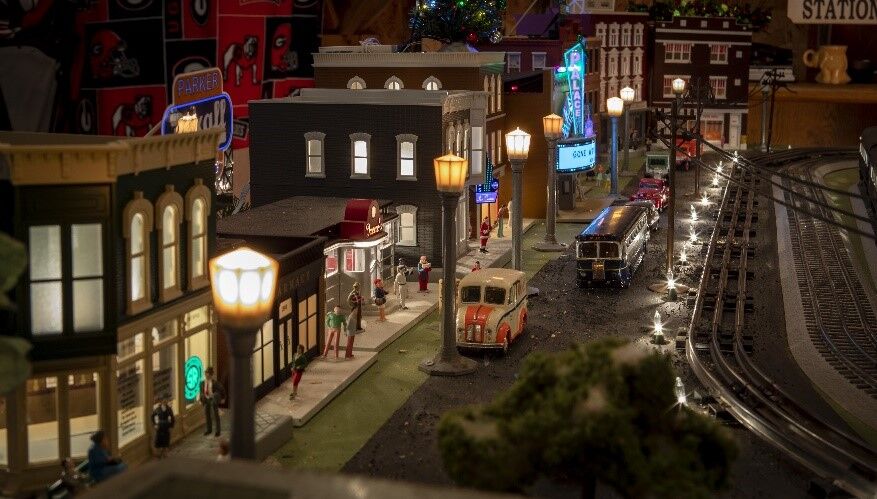 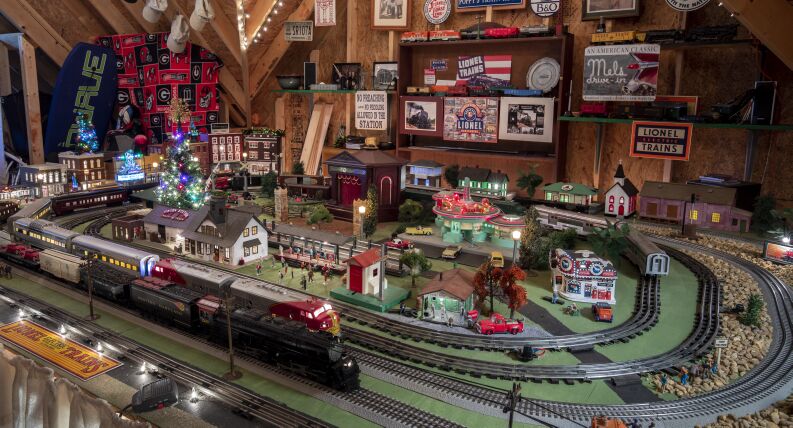 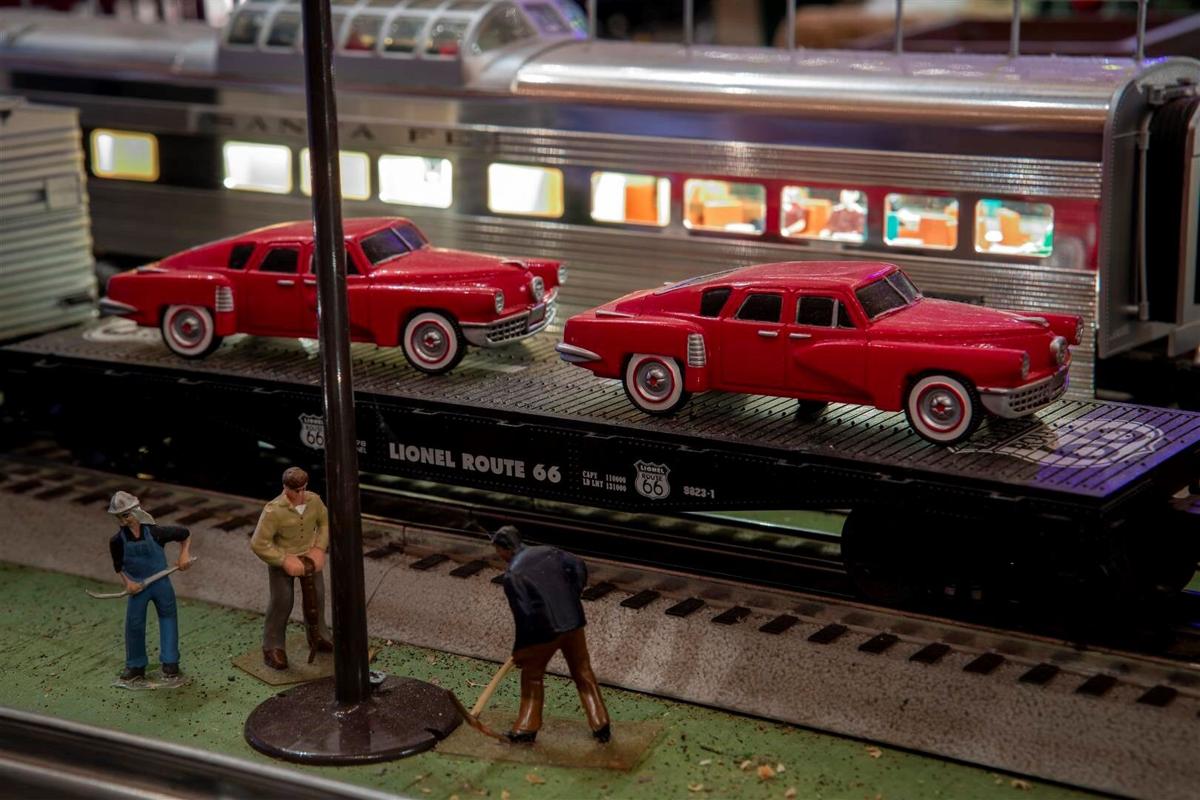 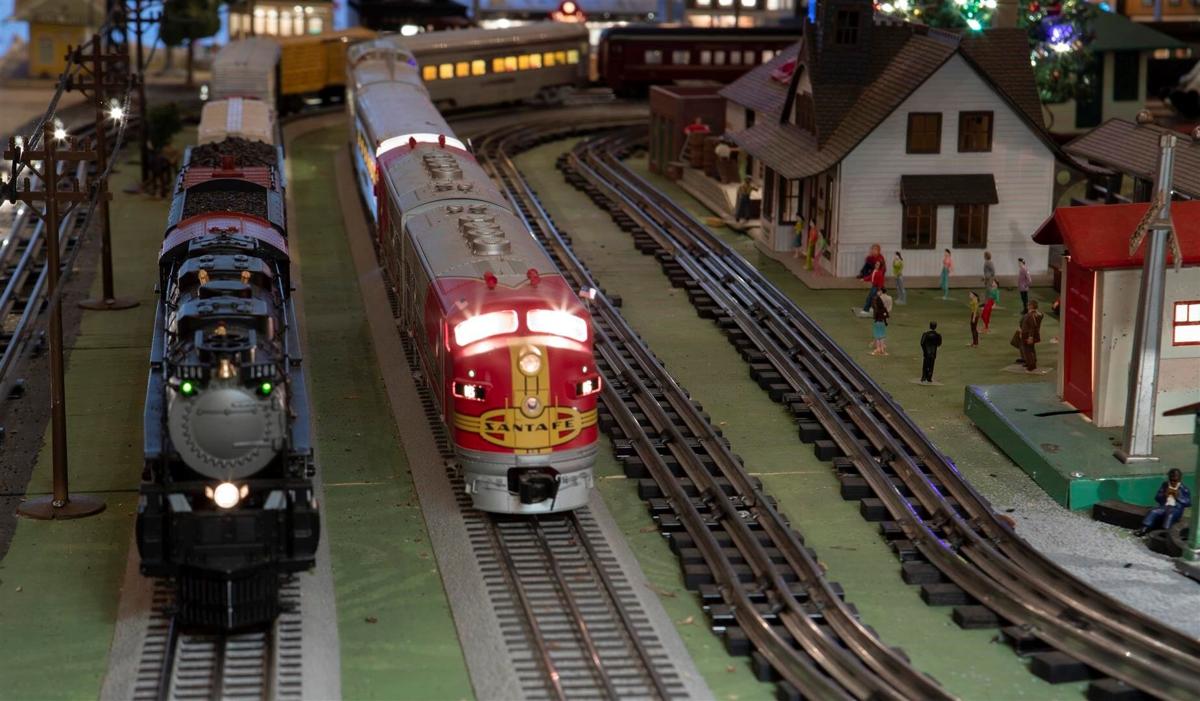 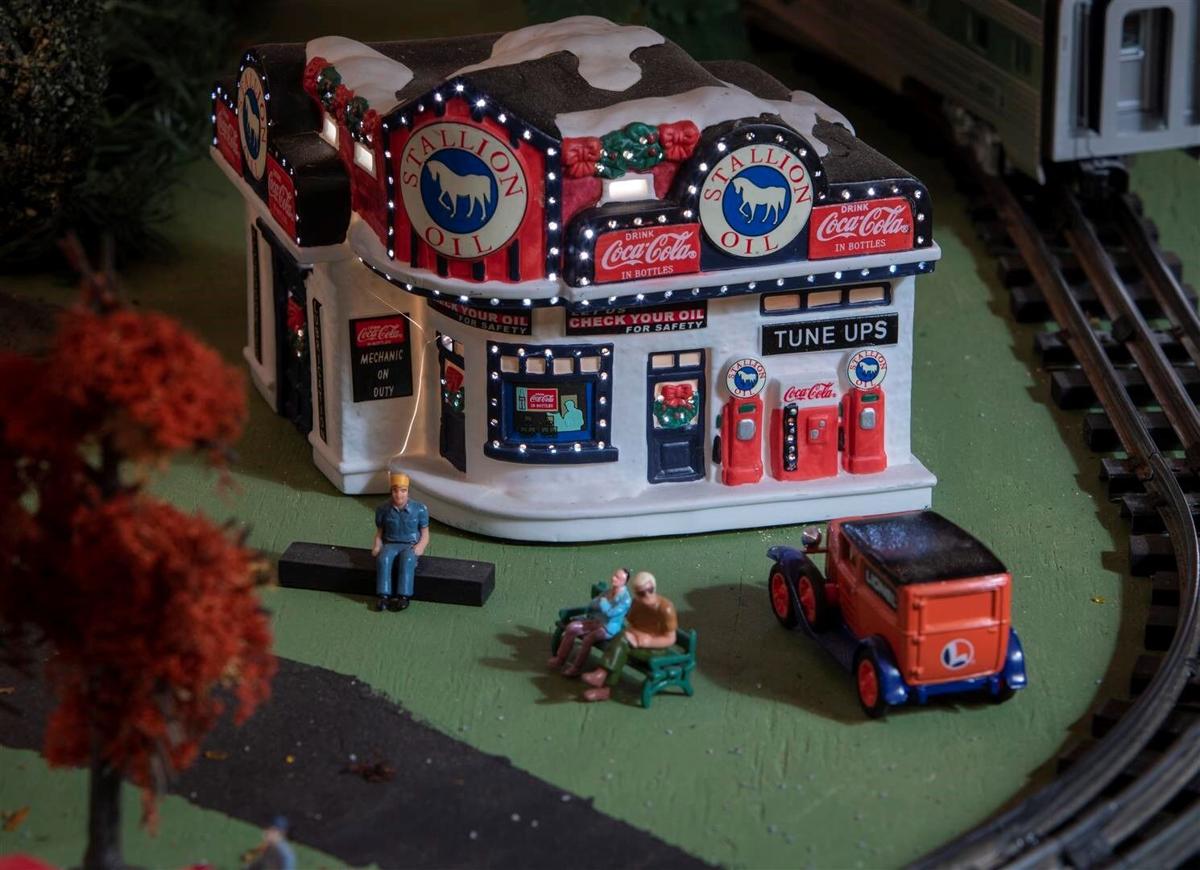 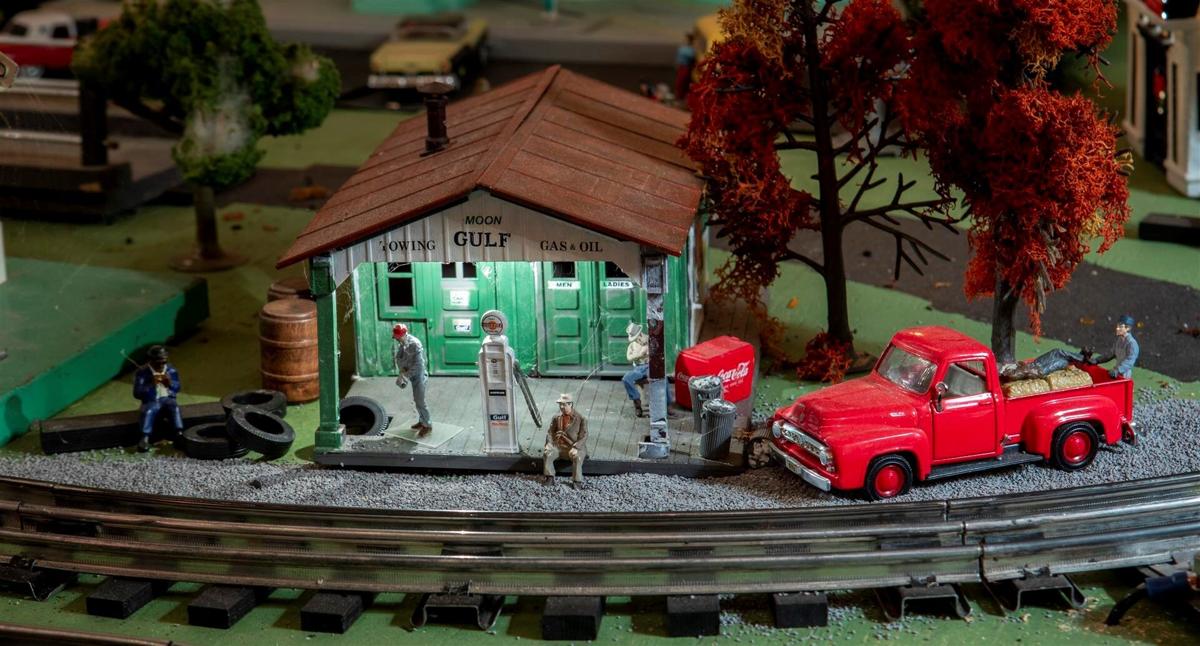 Rev. Len Walker, senior pastor at the Big Canoe Chapel, has one of several Lionel O-Scale train layouts in Big Canoe.  He started his layout in a room over his garage shortly after moving to Big Canoe in January 2012. This four-track layout was designed with a lower height than most layouts so that Len’s nine grandchildren can easily see the trains running and watch the accessories.  “My set is designed exclusively for nostalgic purposes. Everything on the layout points to the 30's and 40's,” according to Len.

“I received my first train when I was nine years old, and I still have several of those cars on the layout,” Len said, describing how and when he became interested in model trains as a hobby.  The train room has train and other memorabilia that he collected over the years hanging on the walls.

“The layout has several features that the grandchildren love,” said Len.  “Their favorite is the Nutcracker Suite—they will watch this over and over and over again and pay no attention to the trains.”  This unique accessory features a stage with a curtain that opens to dancers performing parts of the Nutcracker.  A rotating stage shows six different acts with the curtain opening and closing between acts.  “I saw this in an antique shop in Alexandria, Va. and was impressed by it,” said Len.  When he returned home, he found it at one of the O-Scale train suppliers and it now occupies center stage on the layout.

The other favorite of the grandchildren is Mel’s Diner.  “The 1950s diner was modeled after the original San Francisco diner that was featured in ‘American Gaffiti,’ a 1973 film,” said Walker.   Len has a Mel’s drive-in sign as one of the memorbilia hanging on the wall behind the layout. A 1957 Chevelot moves into a parking spot from the back of the diner while the waitress comes out to take the order. The waitress then returns to the diner and later comes back with the meal, announcing that it will be $2.50—that  was probably a full meal in those days.  Anyone up for a Melburger and fries? The drive-in has another waitress who takes orders from a yellow 1955 T-Bird and delivers an equally low priced meal.

At the end of the layout, beside the trolly track, is Main Street. The center piece of the street is the Palace Theater, where “Gone with the Wind” is playing. Shoppers can pick up a prescription at the pharmacy or get a hammer at the hardware store on the way to see the movie.  Among the many buildings along the street are a train store, an ice cream shop and a café.

From a train operators’ viewpoint, the control system and the four operating tracks are the focus of the layout.  Len uses a Lionel Legacy control system for controlling the trains using a hand-held remote. Traditional model railroad control systems provide power from a transformer directly to the track to control the engine. The Lionel Legacy system controls the engine using digital signals transmitted through the rails to provide more precise control over the engine. Len takes advantage of the control system capability to run any combination of older conventional and newer digital engines on his four tracks.

On the outside track Len has a Lionel 4-6-6-4 Western Maryland RR Challenger Legacy engine pulling some cars from his original set.  Steam locomotives are classified using a system that has been in use since the early 20th century. In the above notation, 4-6-6-4 means that the locomotive has four pilot wheels in front of two sets of six coupled driving wheels, followed by four more trailing wheels. The Challenger was one of the larger steam engines in use from 1936 through the late 1950’s.  The Challenger engine operates in the digital TMCC mode and provides digital crew talk discussions between the engine and the control center that “delights the grandchildren,” according to Len.

One of the more interesting cars on this train is a Lionel Route 66 flatcar transporting two red futuristic looking cars. The cars are the 1948 Tucker Torpedo, which featured many innovative safety features, but unfortunately did not last long in the post-war automobile business.  A crew works at the lamp post near the flatcar, unaware of the impressive passing automobiles.

A passenger train is running on the second track pulled by two Lionel Santa Fe diesel engines in a back-back configuration. The next track has a freight train pulled by an Atlas Central of Georgia diesel engine. Atlas is one of the major suppliers of O-Scale engines and cars. “The train on the inside track is a Lionel Southern Legacy set pulling a couple of Southern passenger cars,” said Len.  “I also mix some cars from Baltimore & Ohio (B&O),” he added, “My grandfather and one of my uncles worked at B&O. My father was born and raised on a farm in Cumberland, Maryland, and one of my passenger B&O cars is named Cumberland.”

Sitting beside the inner track is one of the three depots that he has on the layout.  The Union Station has several people standing in front and by the side of the depot waiting for the passenger train to stop.  Like many of the buildings on the layout, the depot has lights of day and night operation.

There are several dioramas on the layout depicting scenes from days-gone-by. The Stallion Oil station is ready to provide tune-ups and gas to the traveler, as well as satisfying their thirst with Coke Cola. There are people sitting outside the station watching the trains and traffic go by.

The Moon Gulf gas station sits by the tracks offering gas, oil and towing.  Several guys are usually hanging out on the porch of this old-time station exchanging fishing and hunting stories, or just taking a nap.

It is impossible to show the action that goes on in the layout in pictures and words so a sort video of the trains in operation can be viewed below this story.

Len’s layout brings back fond memories of our youth for those of us who received model trains in our youth and set up similar layouts in our basements or spare bedrooms.  Our thanks to Len for letting us share the model train layout with our readers in this first of seven articles on Big Canoe model train layouts.