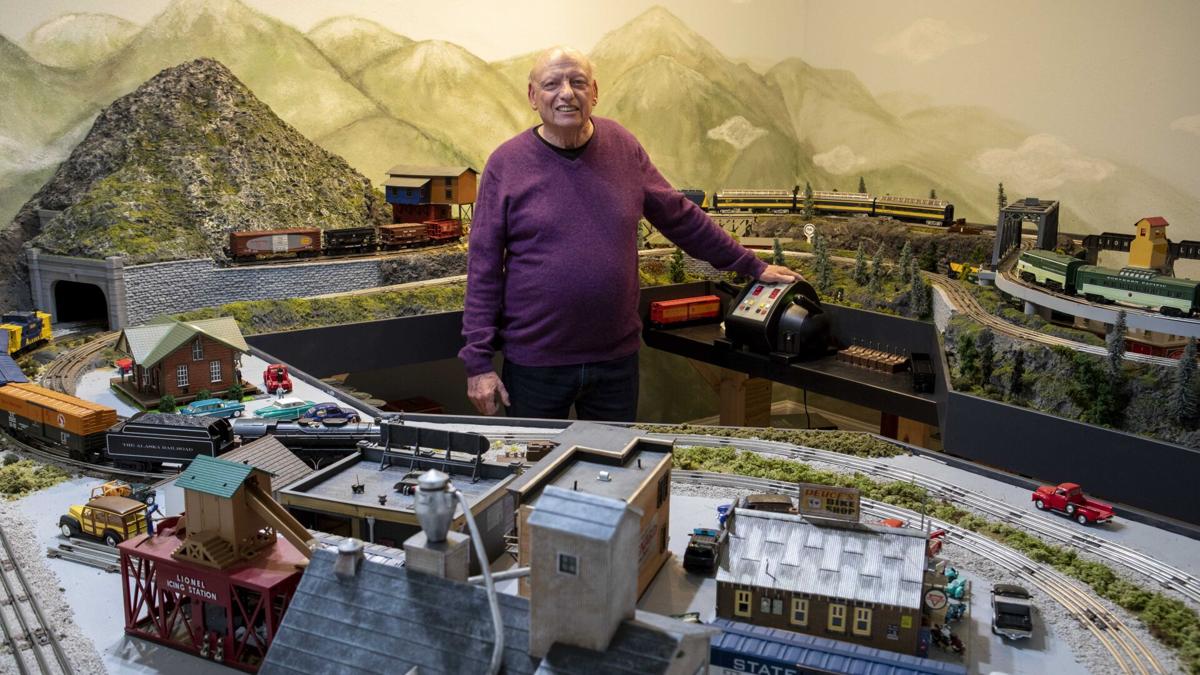 The control panel is in the center of the layout. 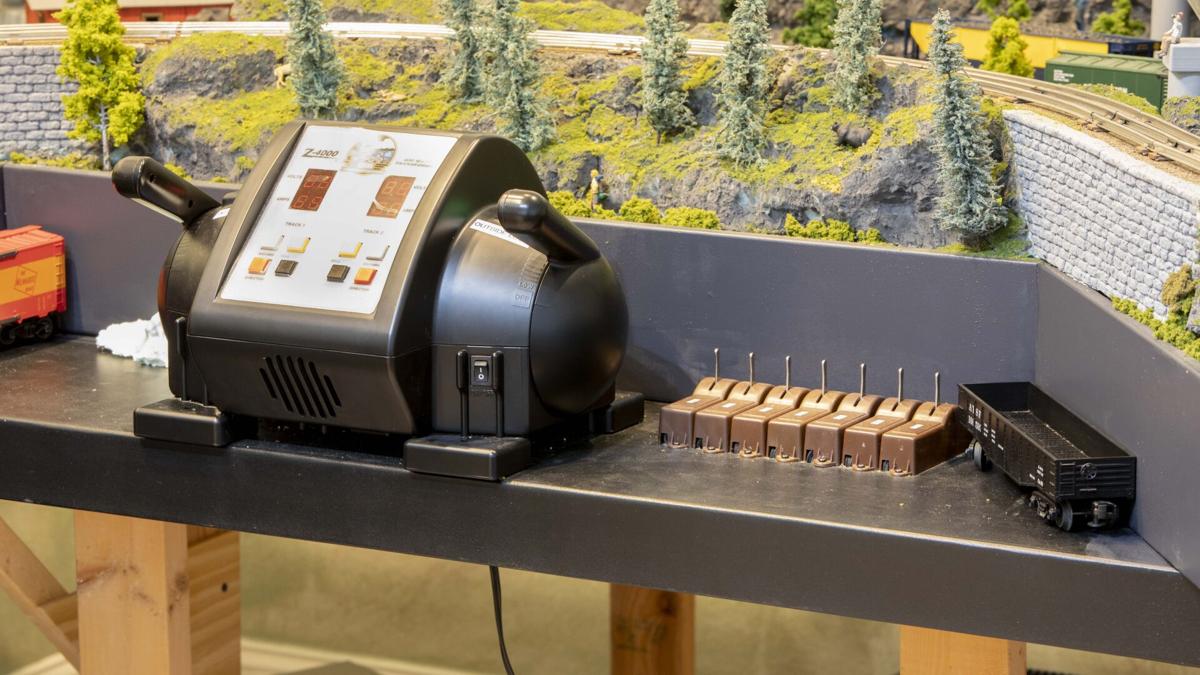 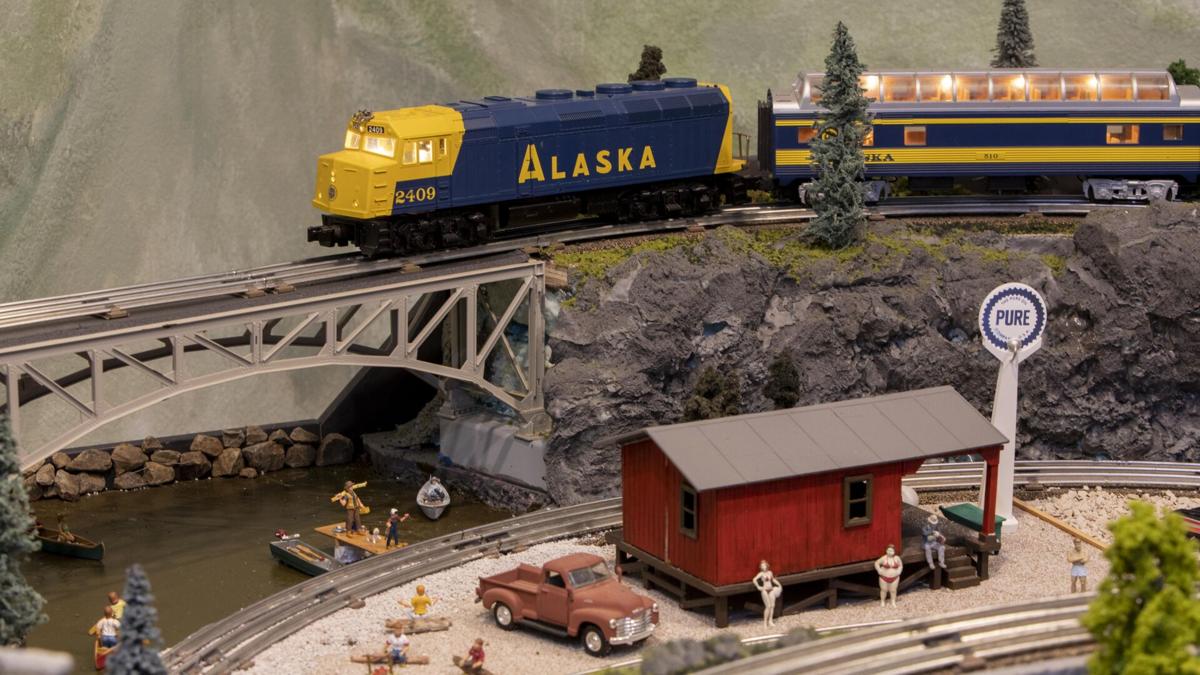 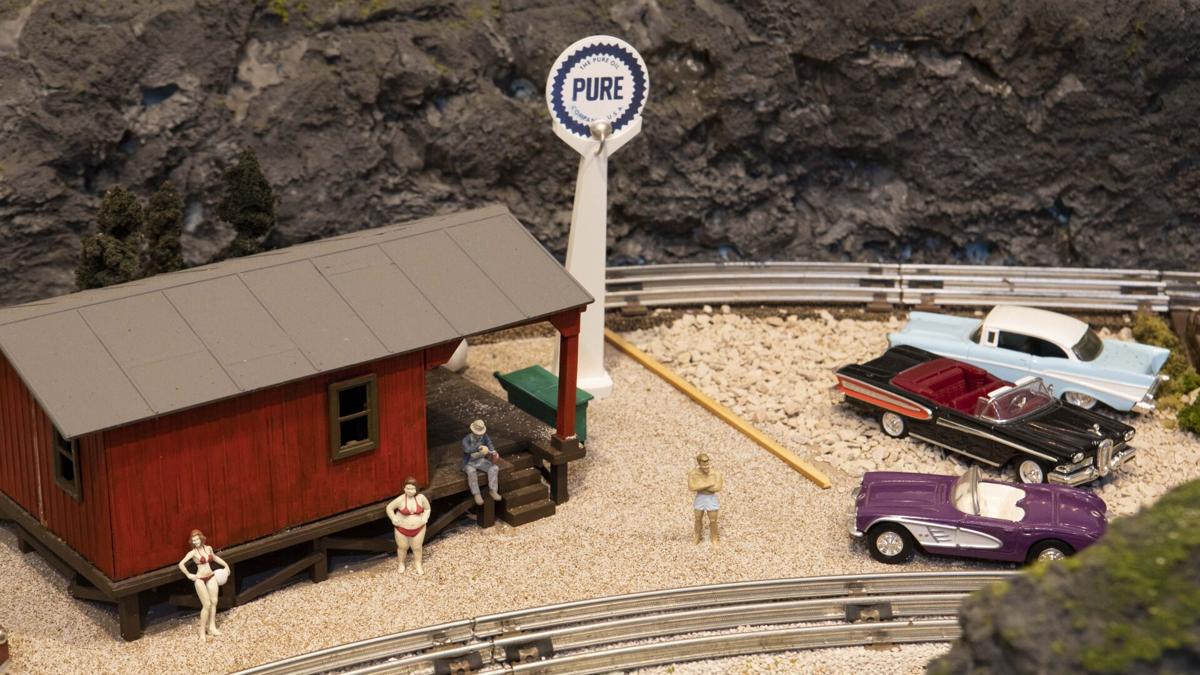 The bait shop provides a good area for sunbathing and looking at the vintage cars parked nearby. 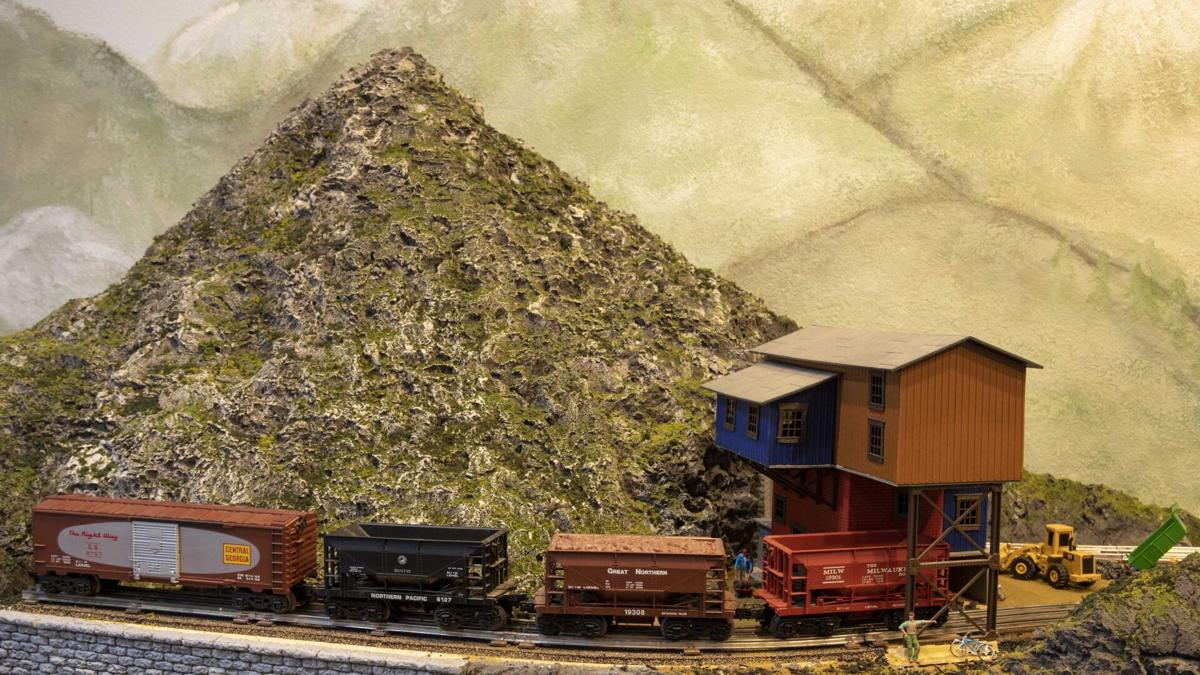 A mountain with a coaling station dominates the center of the layout. 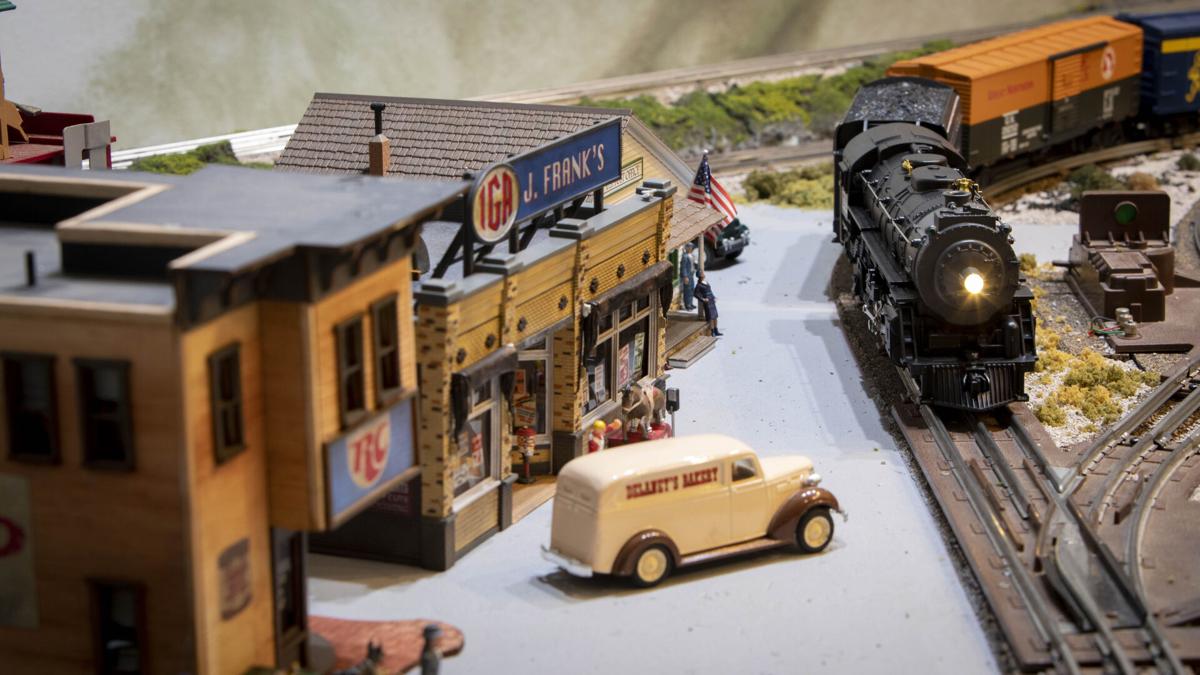 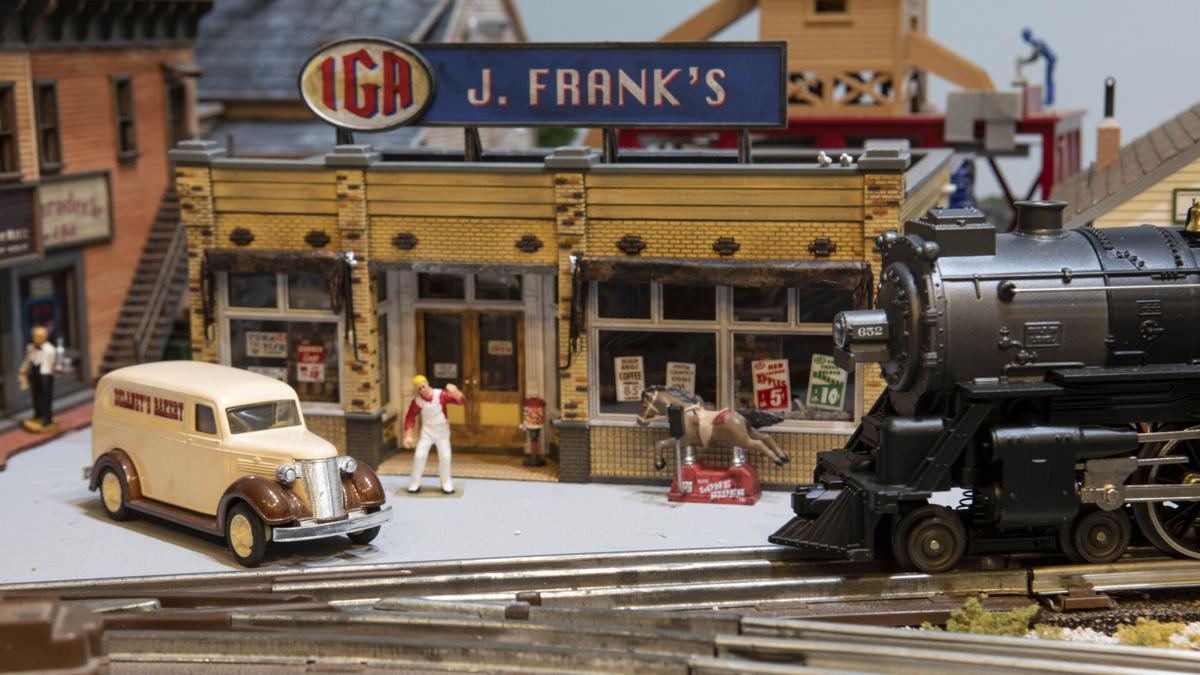 The second building in town is the J. Frank’s IGA store. 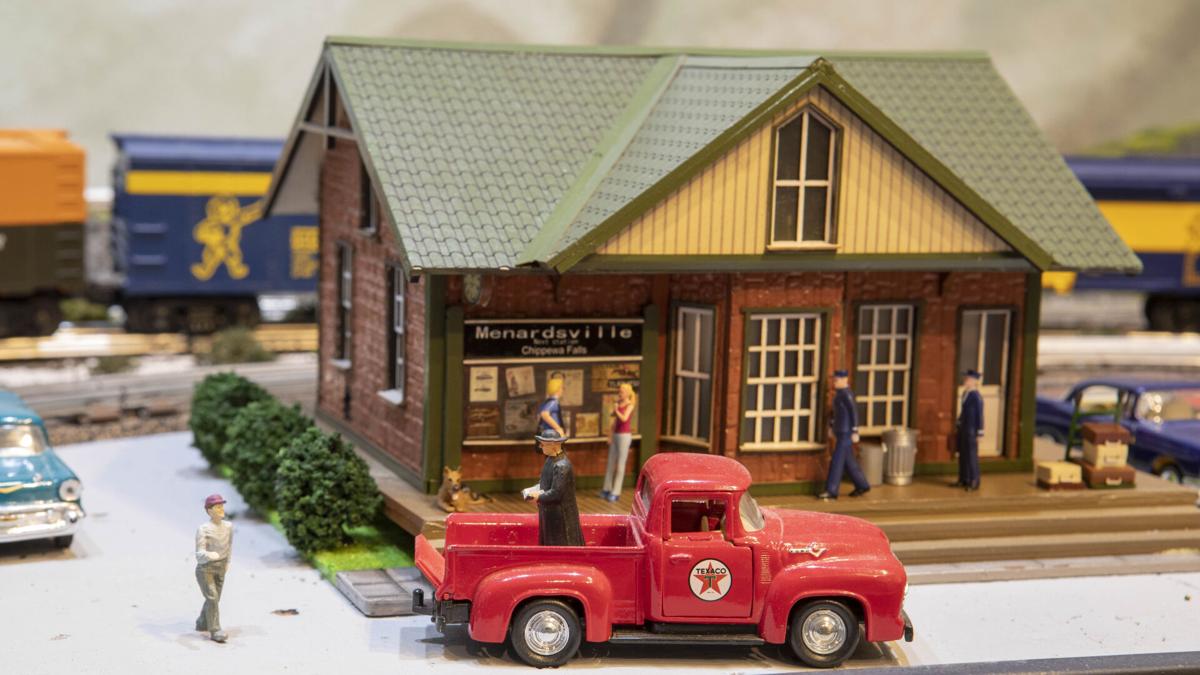 A man listens to the preacher standing in the back of the red truck in front of the Martin’s Gulch railroad terminal. 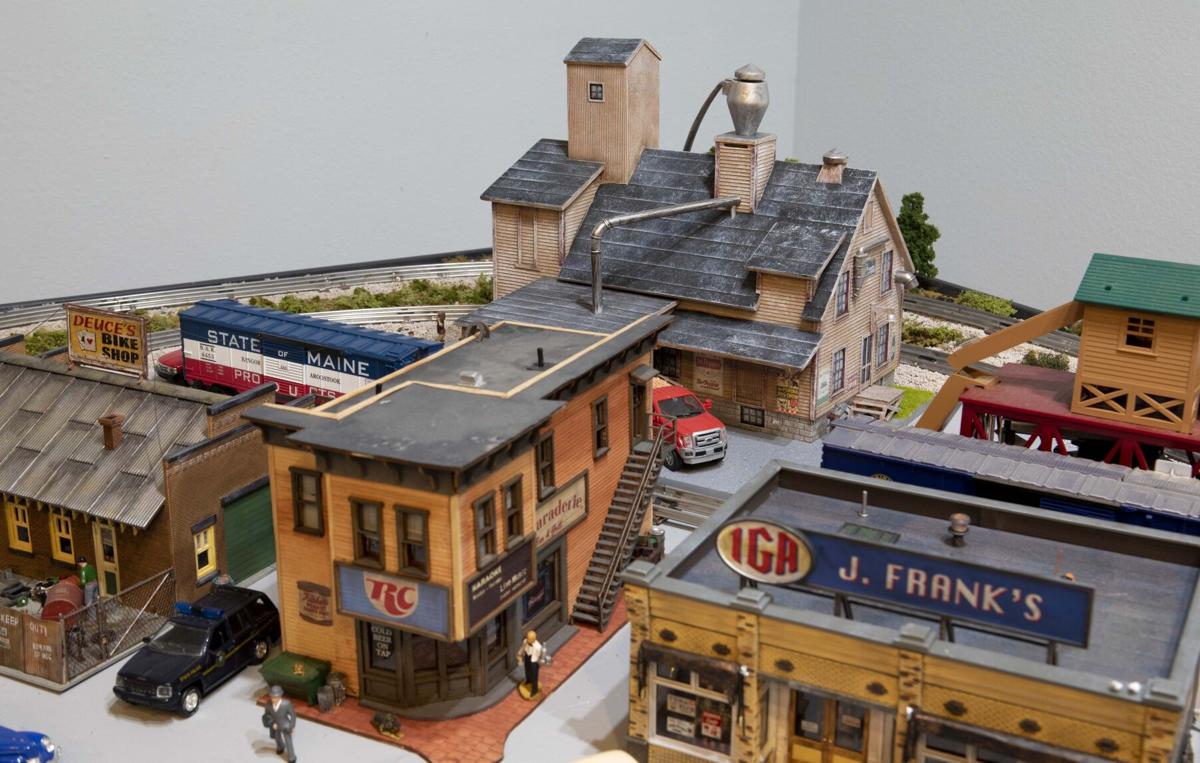 The bar and grill and bike shop are down the street from the IGA. 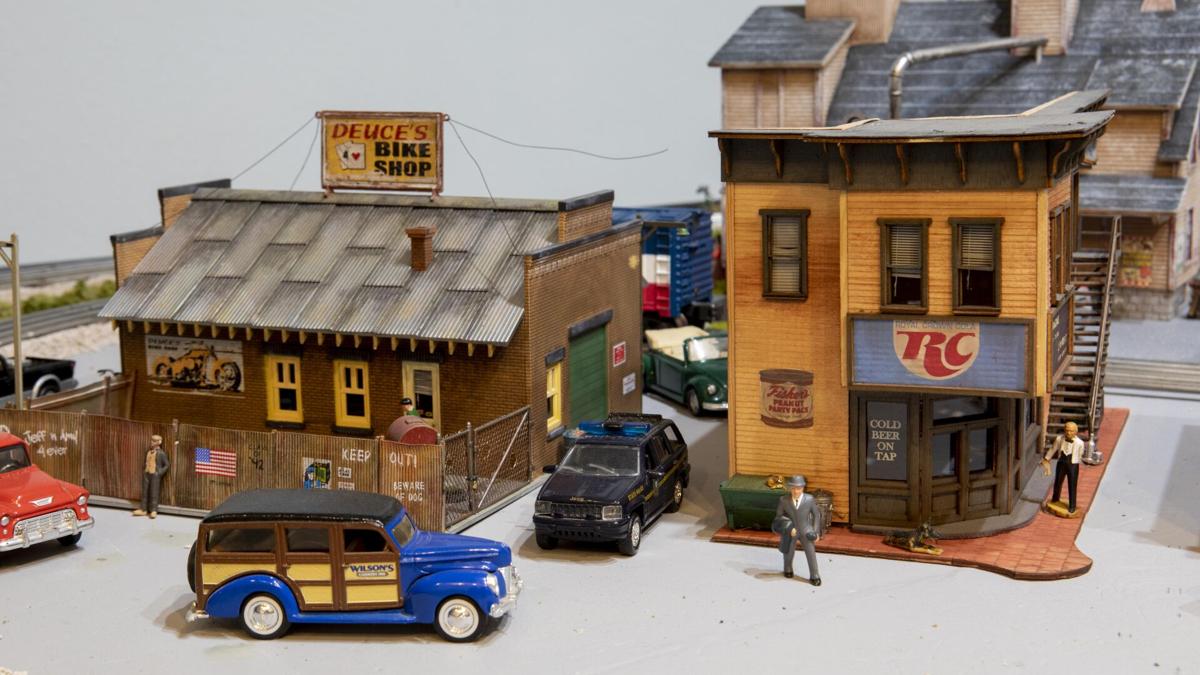 A vintage Woody car drives by Deuce’s Bike shop towards the bar and grill as a man waits to cross the street. 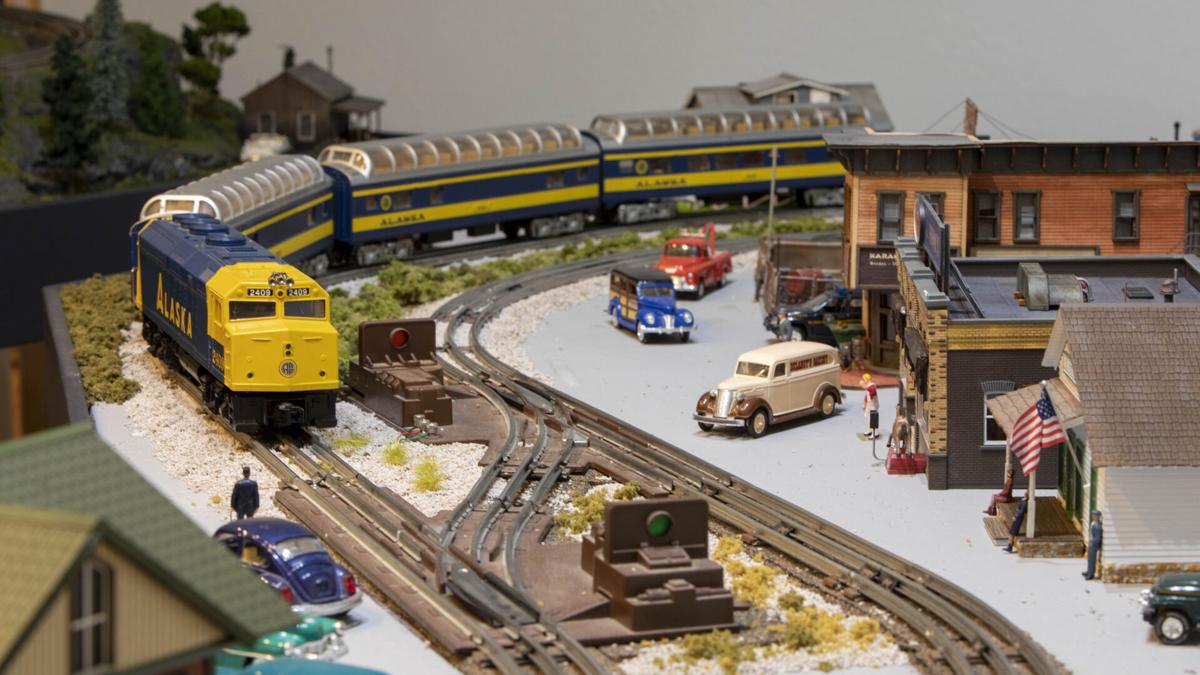 A man near his Volkswagen watches the Alaska Railroads engine approach. 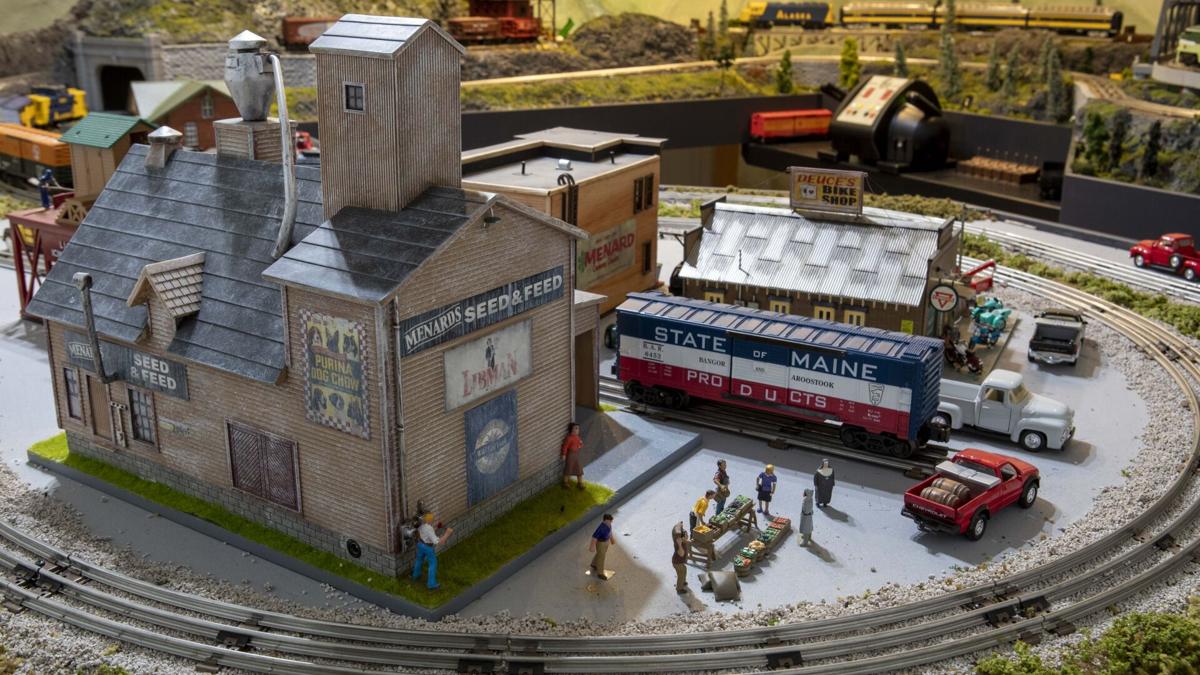 A farmer’s market setup behind Menards Seed and Feed store. 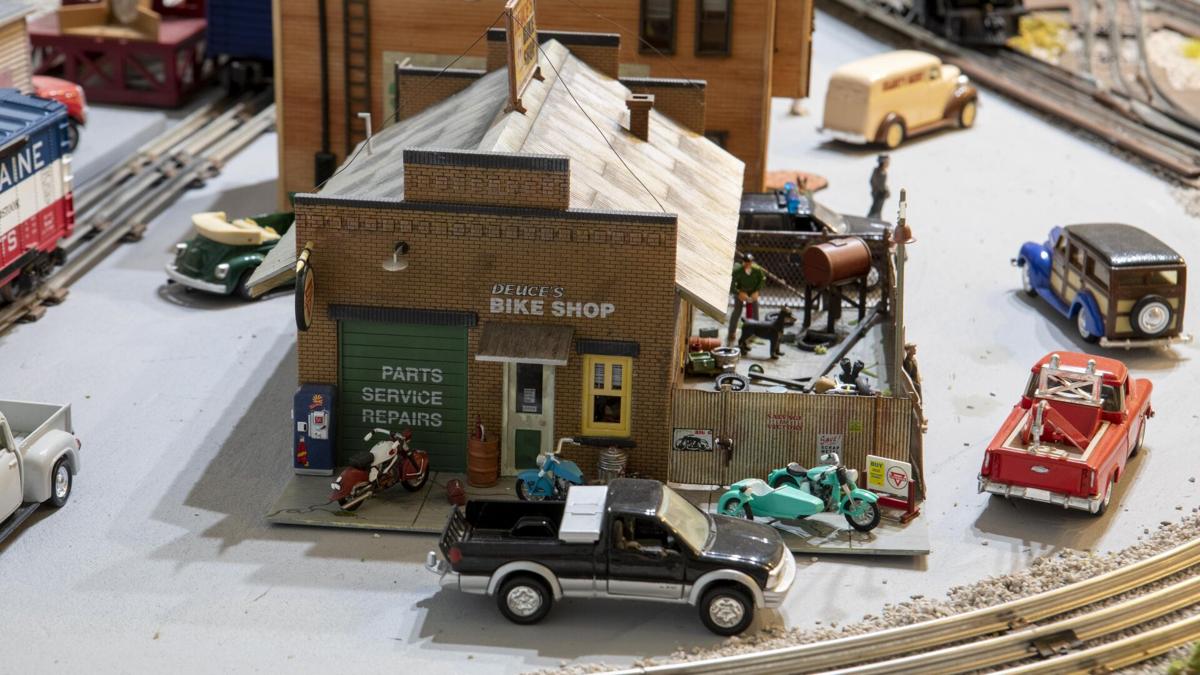 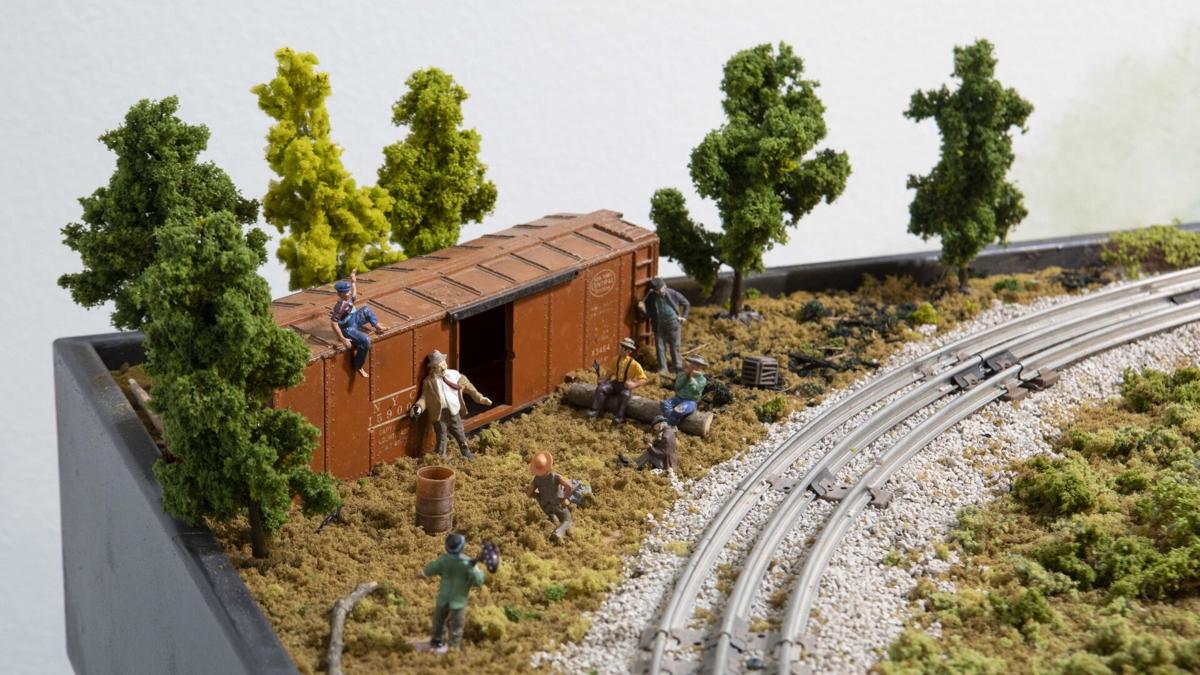 The hobo camp in an abandoned box car. 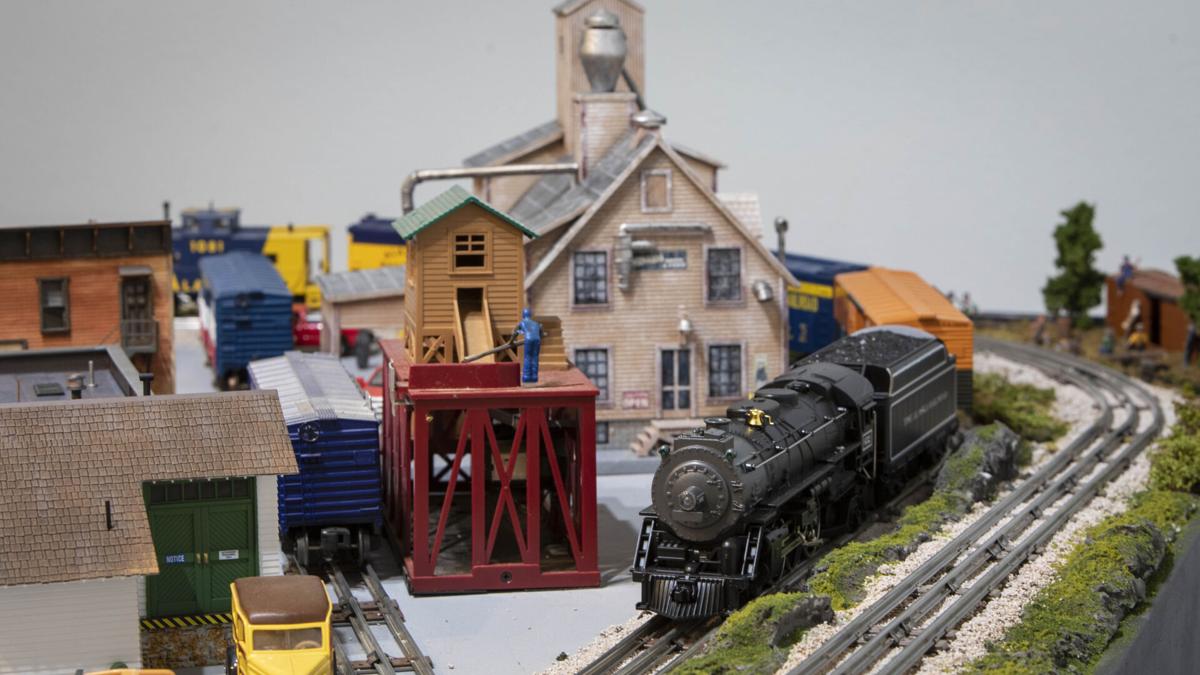 The Alaska Railroad steam engine pulls the freight train around the bend at the edge of Martin’s Gulch. 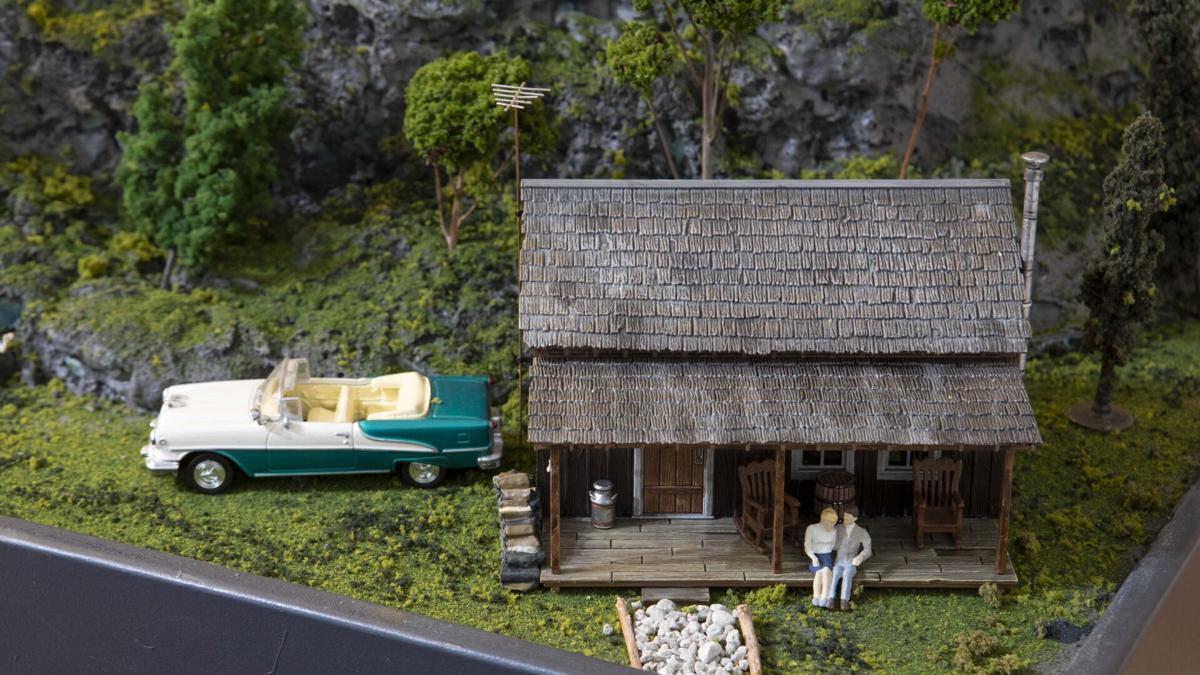 A couple sits on the porch of their mountain cabin looking at the view. 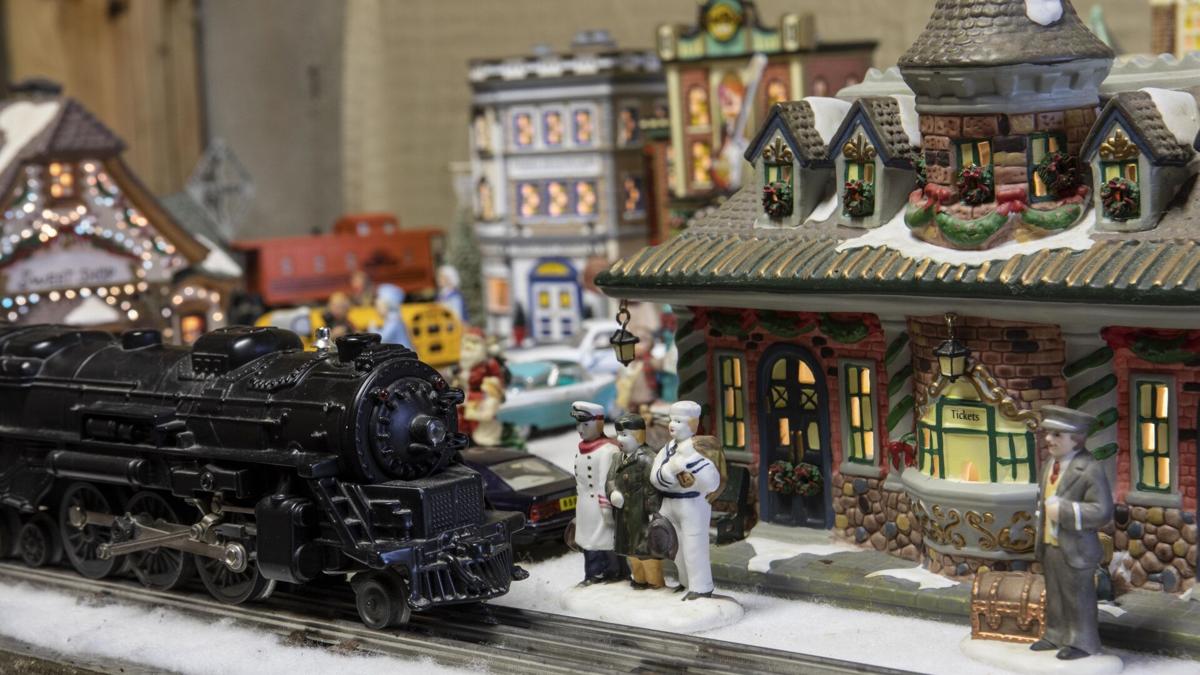 A locomotive approaches the train depot on Mike’s Christmas layout, all decorated with snow. 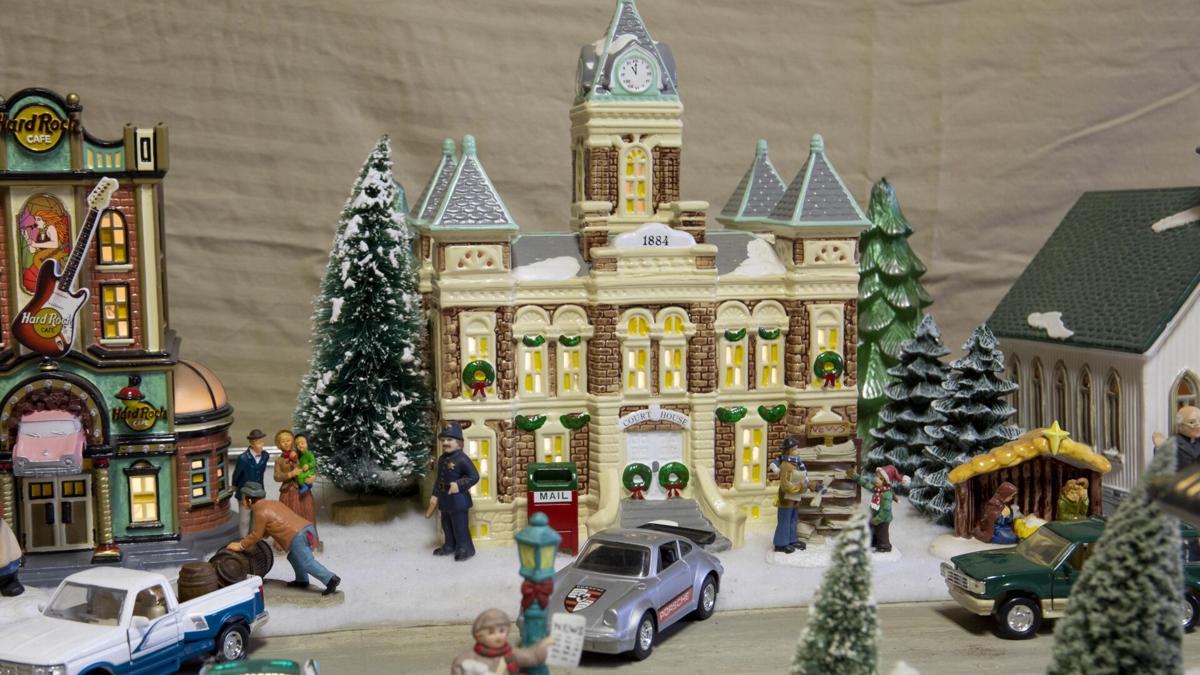 The courthouse sits at the center of the Christmas layout.

Mike Martin, a Navy Vietnam Veteran, retired in 2006 from his position as Assistant Chief Counsel for the Bureau of Alcohol, Tobacco, Firearms and Explosives (ATF), where he supervised ATF attorneys throughout the Southeast. Mike and his wife Jeanie enjoyed hiking the mountains of North Georgia and fell in love with and moved to Big Canoe in 2004.

“I received a Marx train set when I was eight and when I was 12 my father brought me back a Marklin train set from Germany,” Mike recalled.   “But I was always enamored with the Lionel O-Scale and the way it operated as well as the size. When I was 37, I received a Lionel train set for Christmas—as a present from me, and I finally had the trains I wanted since I was little,” he said.

When they lived in Dunwoody, he had an O-scale layout in his house.  “My layout was eight feet by 32 feet, with a lot of track and yards for rolling stock but very little scenery,” he said.  After 10 years in Big Canoe, Mike started to think about building another layout.  “I did not pick any particular style, time or era. I have a mix of steam and diesel because I did not want to be confined by what locomotives, rolling stock, or vehicles I would have,” he stated. “I started moving pieces of plywood around on sawhorses but was frustrated by the fact that my layout was going to be half the size of my prior layout. One day Jim Long asked if he could design a layout to fit the room and it was like the pressure was off my back,” recalled Mike.  “Jim and Robb Hauck helped build the table and Nick Dalba provided a lot of good advice over the years,” Mike said. After six years it is “nearly finished” but Mike said, “I still have some work to do on one section of the layout to add buildings and landscaping.”

The layout has two tracks and includes sidings for parking trains for loading and unloading. One of the sidings, shown in the photo below, is an elevated “reversing siding” where the track loops back on itself so the train can be turned around. After the trains pass through the mountain tunnel they come into the small town of Martin’s Gulch.

The trains are controlled from a strategically placed control panel.  “I placed the control panel in the center of the layout so I could see all the tracks and turnouts from one location,” said Mike. From here he can control start, stop, speed and train sounds such as horns and whistles.

The trains are powered by a MTH Z-4000 dual channel transformer connected directly to the two tracks to run the trains. Speed and reverse are controlled using the two transformer handles to vary AC (alternating current) voltage on the tracks.  The seven turnout, or track, switches are mounted beside the transformer to control the direction of the turnouts that switch trains between tracks, or from the main track to sidings where train cars can be loaded or unloaded.

“For our 40th wedding anniversary, my wife Jeanie and I took an Alaskan cruise. We added a two-day trip to Denali and rode on the Alaska Vista Dome passenger cars,” Mike said. “Subsequently, I saw an Alaska passenger set for sale on eBay that was identical to the train we rode so I bought it,” said Mike. He later added an Alaska steam engine and several pieces of Alaska Railroad rolling stock.  The Alaska train with lighted scenic dome cars can be seen in the photo below ready to cross a bridge over a stream that affords residents a beach and place to swim. A bait shop provides refreshments for swimmers and bait for fishing.

In the parking lot on the other side of the bait shop three vintage cars are parked.  “The guys especially like the ’57 Chevy and the Edsel and Corvette convertibles,” said Mike.  Bathers stand around the building while a man with a wrench sits on the steps working on an engine part.  Everyone at the bait shop and the beach have a great view of the trains passing by.

A mountain occupies the center of the layout, with a backdrop of mountains painted on the walls of the room to provide depth.  “I had a family friend who was an artist paint the backdrop a few years ago when she was unemployed,” said Mike. Both tracks go through tunnels under the mountain and a coaling station is situated on the side of the mountain.  A siding from the inside track leads to the station, which is in the process of loading a coal hopper from the coal mine in the mountain.

As the trains leave the mountain, they enter Martin’s Gulch, a small community of stores and a train depot. The Alaska Railroad steam engine approaches J. Frank’s IGA, which is modeled after J. Frank’s original IGA store. A delivery truck is parked in front of the store to make a delivery.  The town post office is on the other side of the grocery store.

The train depot is across the tracks from the post office and IGA store on the track into Martin’s Gulch. Several ‘50s era cars and pickups are parked around the terminal, with a red Texaco pickup parked in front.  A preacher stands in the back of the pickup preaching to a young man walking up to the truck. Others on the deck of the terminal are waiting for the train.

Down the street from the IGA is the Camaraderie Bar and Grill as a patron leaves the grill.  Next door to the grill is Deuce’s Bike Shop, which has a lot of neat things scattered around inside the fenced-in back yard.  Behind J. Frank’s is the local icehouse and beside that Menards Seed and Feed.  Between the buildings a State of Maine box car sits on the siding waiting for unloading.

The Alaska Railroad passenger train rounds the curve at the end of Martin’s Gulch as it heads toward the train depot on the left.  The turnouts, or switches, in front of the engine allow the train to cross from one track to the other. The turnouts are controlled from the control panel.

Menards Seed and Feed is located at the end of town. “Menards is a recent entry into the O-Scale trains and has some really nice products,” according to Mike. “In Menards side parking lot, local farmers have their produce lined up for sale at the Saturday market,” said Mike. Farmer’s pickups are parked around the State of Maine boxcar.

Deuce’s Bike Shop sits beside the Camaraderie Bar and Grill.  Several motorcycles sit outside the shop, including one with a sidecar. The fence beside the shop contains a watchdog guarding the contents of the yard.

Across the track from Menards sits an abandoned box car with several hobos sitting around or on the boxcar.  One of them, standing near the door, appears to have had one swig too many from the bottle in his hand as the others sit and listen to his rants.  “There is an interesting story behind the car,” said Mike.  “A few years ago, when I was leaving for a train show, my wife Jeanie told me to buy something for my birthday. When I got home, I showed her this car,” he continued. “Why did you buy something old and beaten up without wheels,” said Jeanie. “It was a bargain at only one dollar, and besides the production date on the side of the car is the month and year I was born,” replied Mike. The hobos seem to enjoy Mike’s boxcar.

The Alaska steam engine rounds the corner behind Menards, giving the train engineers a good view of the icehouse.  A workman on top of the icehouse prepares to push ice into the top doors of the waiting refrigerated box car, called a reefer.

On the side of the hillside below the tracks sits a small cabin with a couple sitting on the edge of the porch enjoying the view and each other. Their 1956 Oldsmobile convertible sits by the side of the cabin ready to go to the lake.

In addition to his O-Scale train layout Mike has a small Christmas layout in an adjoining room.  “We used to set this layout up around the Christmas tree every year, but we decided it was too much work and now just leave it so we can enjoy it all year long,” said Mike.  The layout contains several buildings around the oval-shaped track where an original Lionel engine pulls a freight train. The engine approaches the depot where two sailors and a porter wait.

The town courthouse is flanked by the Hard Rock Café on the left and the church on the other side.  A couple with a child and a policeman watch as a man rolls a keg of beer from the pickup into the café.

In conclusion Mike said “I patiently wait for the day when Jim Long, Nick Dalba, Don Moranos and I can go to Legacy Station in Lilburn, Ga. Legacy Station is a complete model train store that begs one to open their wallet. No trip to Legacy is complete without a barbecue lunch.”

We extend our thanks to Mike Martin for offering the opportunity to explore the Martin’s Gulch railroad.

Please check out the video of the Martin’s Gulch railroad layout below: