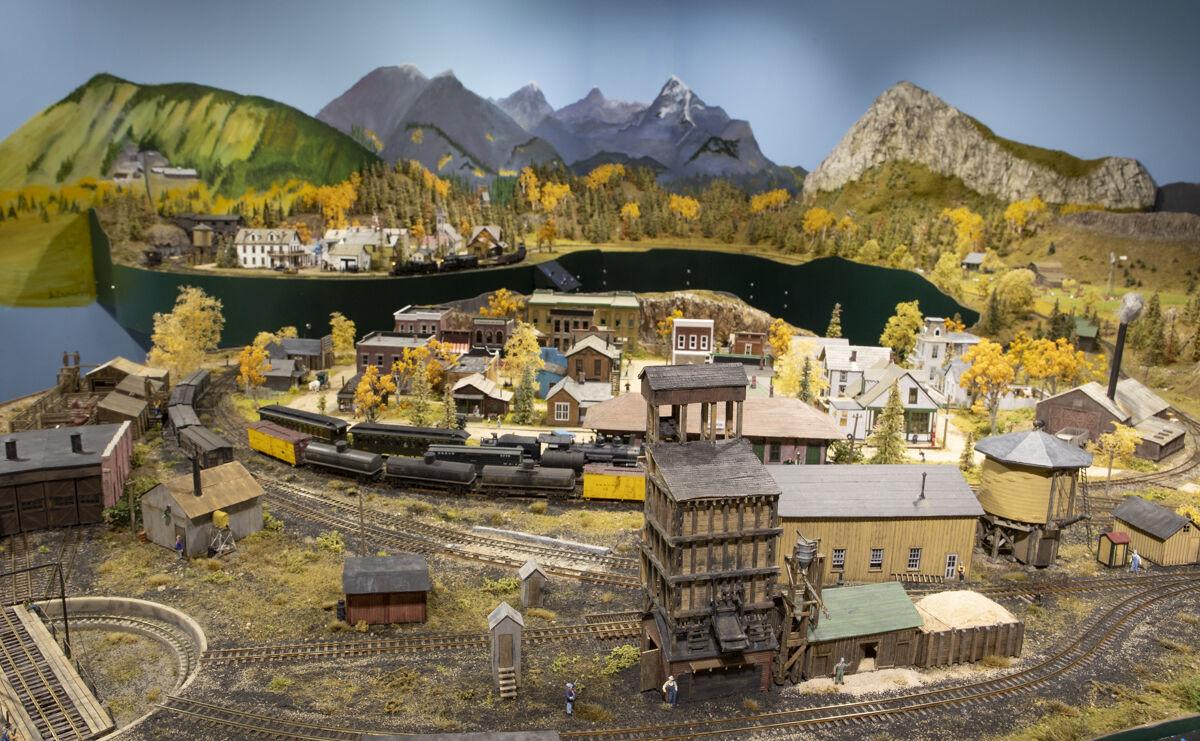 Lee Schalon’s HOn3 Colorado Narrow Gauge Railroad, with Gunnison in the foreground and Crested Butte at the other end of the valley. 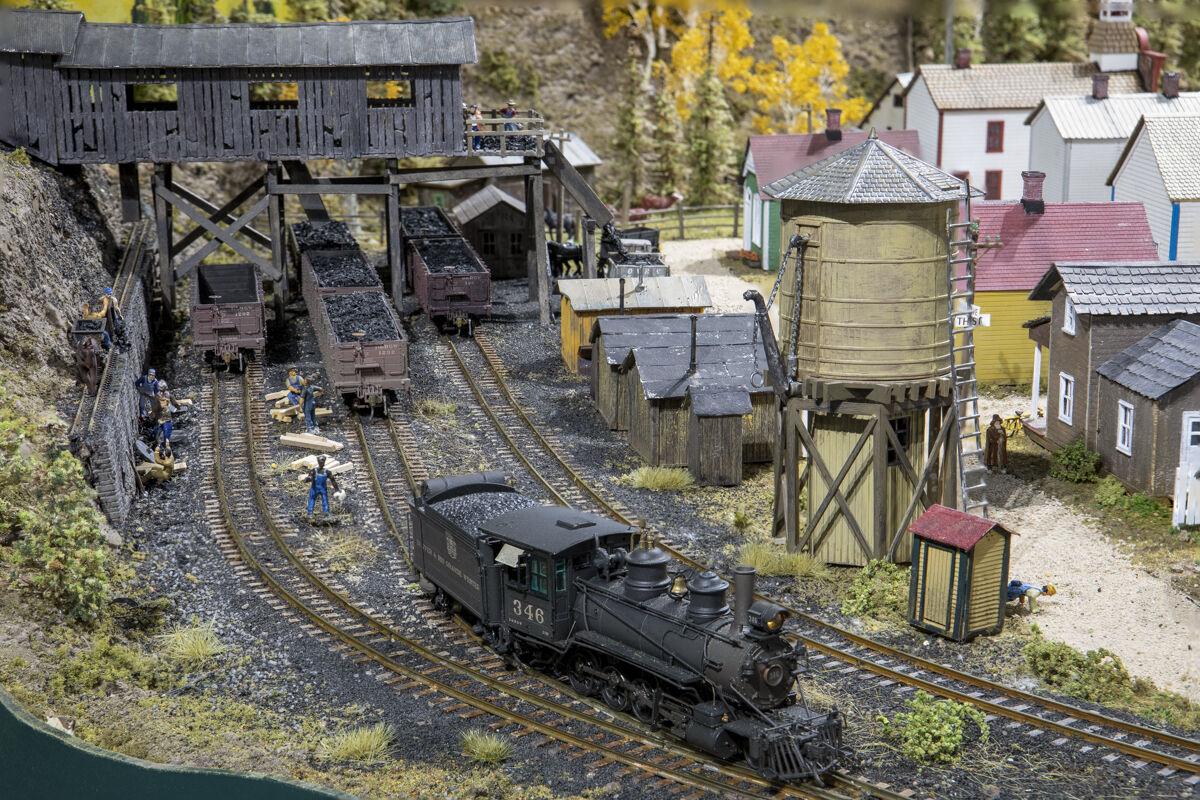 Engine 348 waiting to pick up coal cars loading under the coal chute. 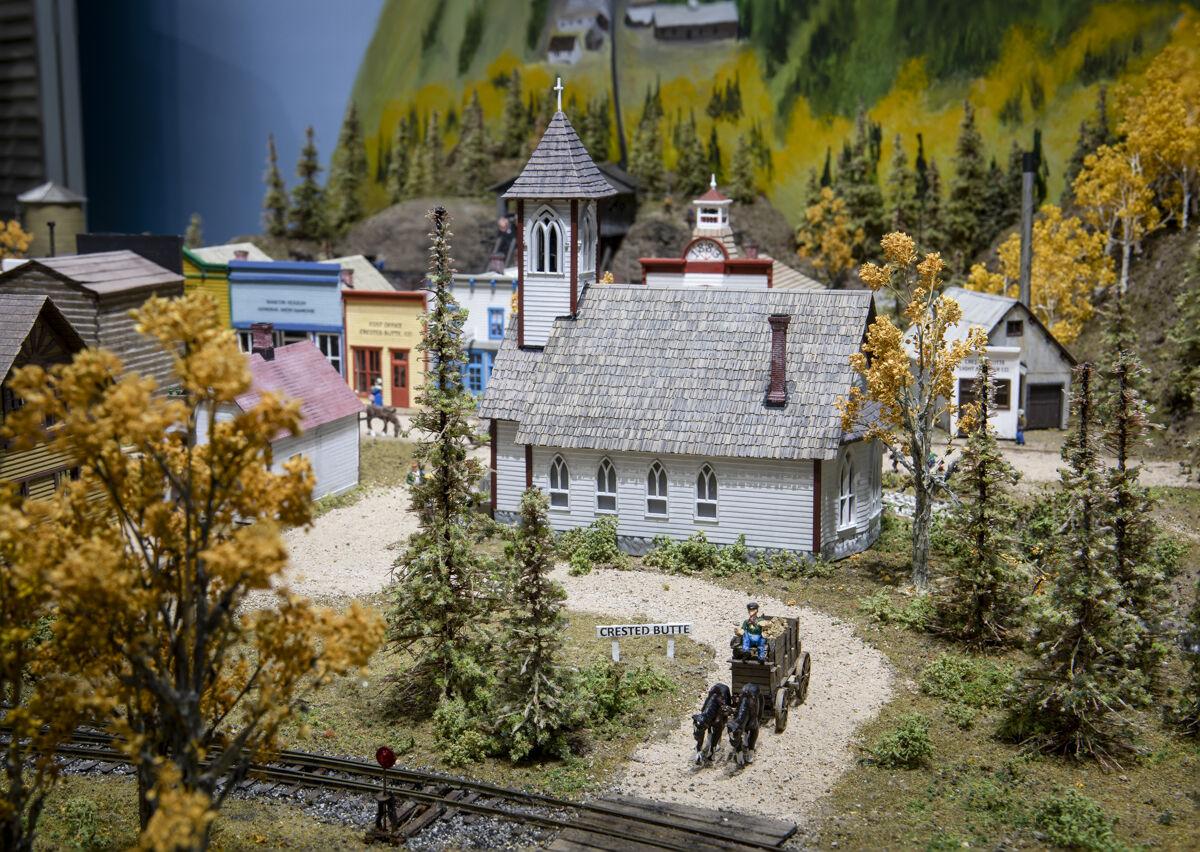 The railroad passes by the edge of Crested Butte. 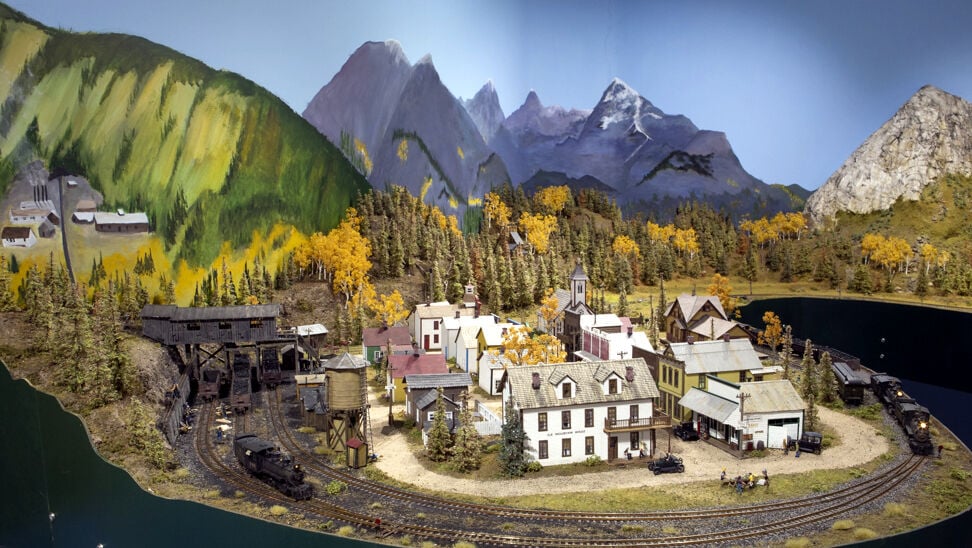 The railroad circles Crested Butte on the way to the coal mines. 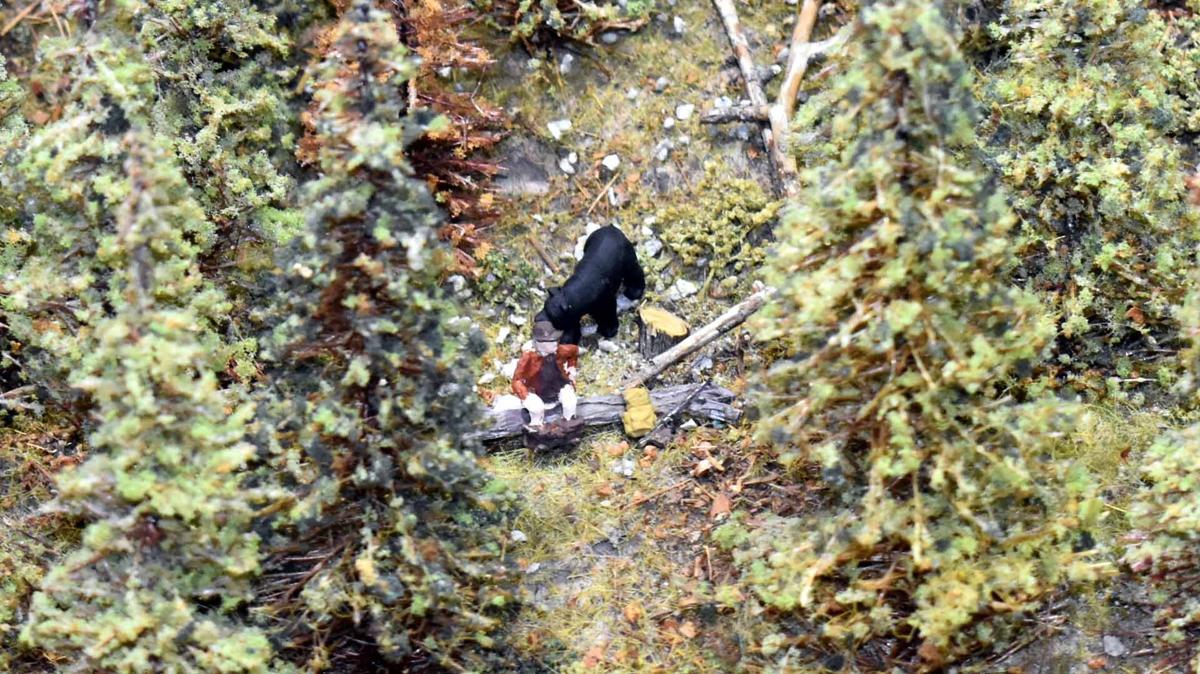 A hunter is about to receive a big surprise. 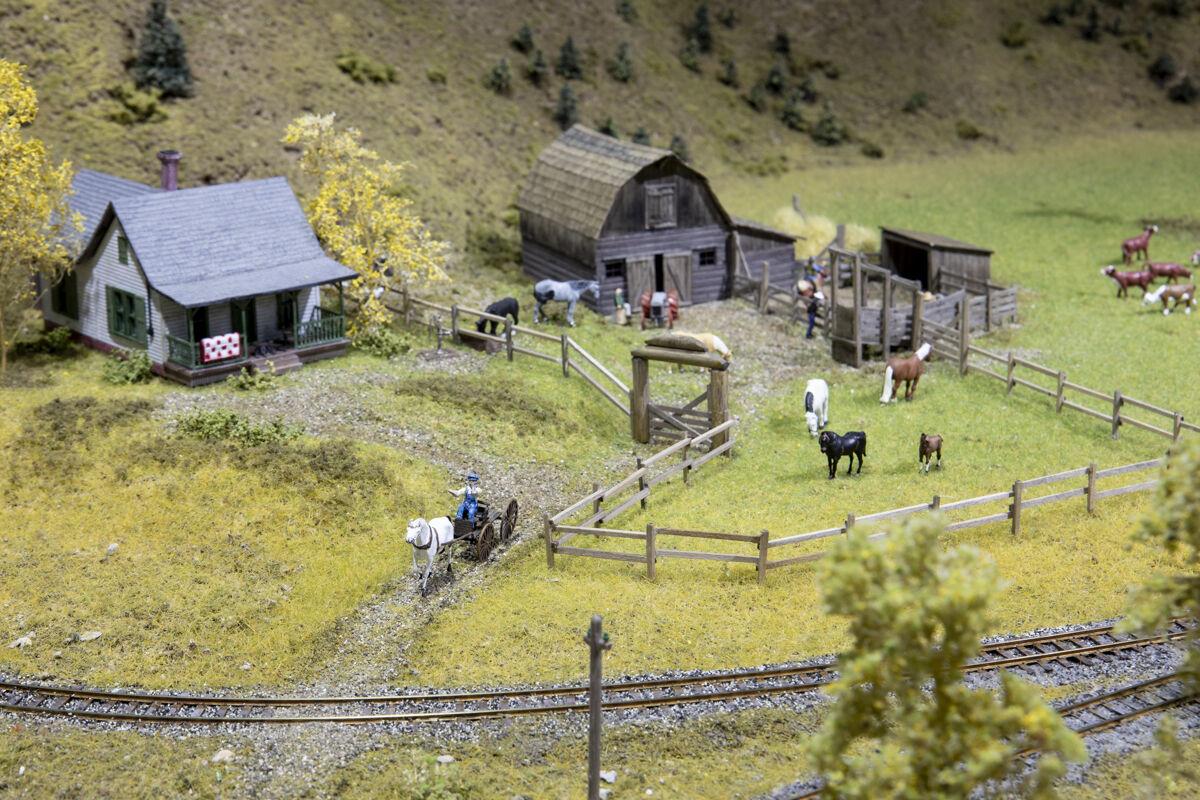 A ranch beside the railroad between Crested Butte and Gunnison 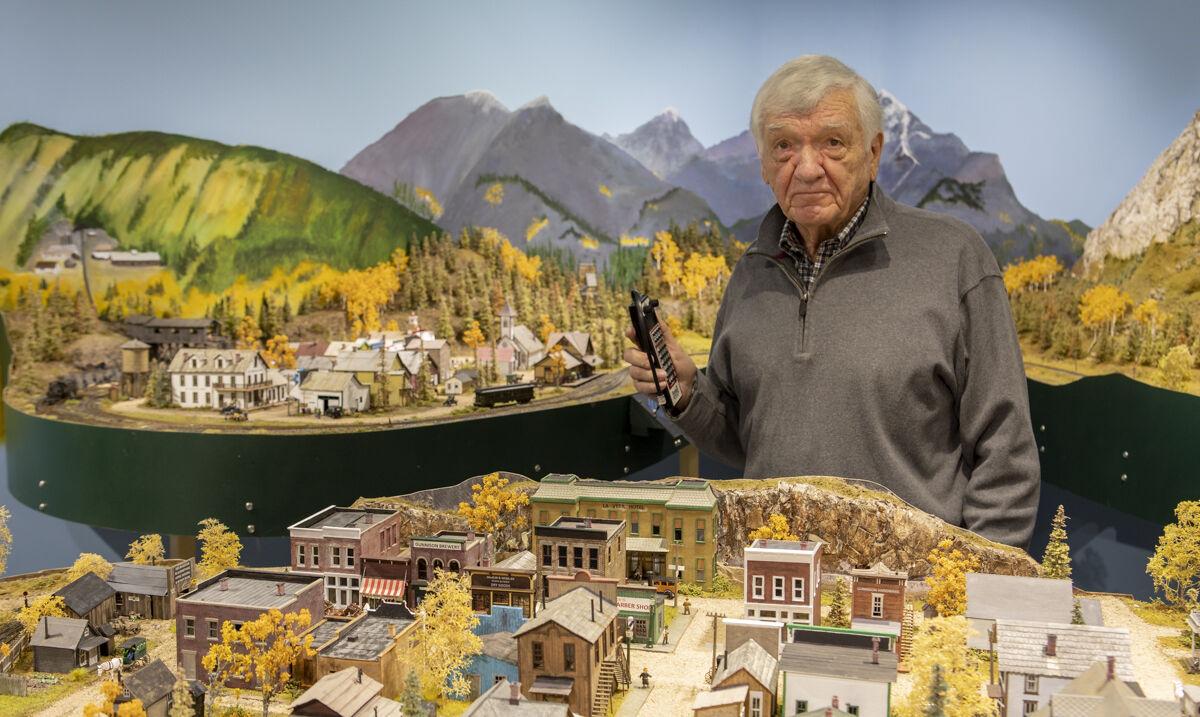 Lee stands behind the town of Gunnison with one of his hand-held DCC controllers. 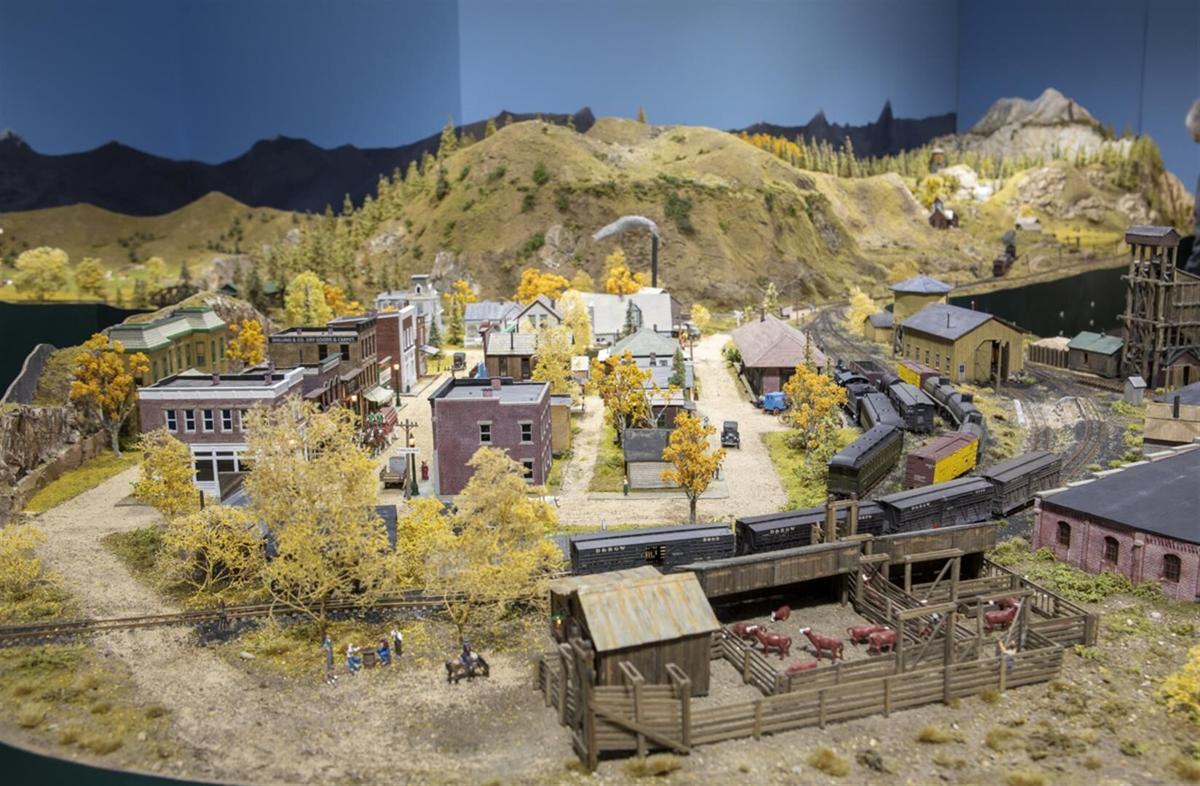 Gunnison cattle pens along the railroad siding with cowboys sitting around a barrel beside the cattle barn. 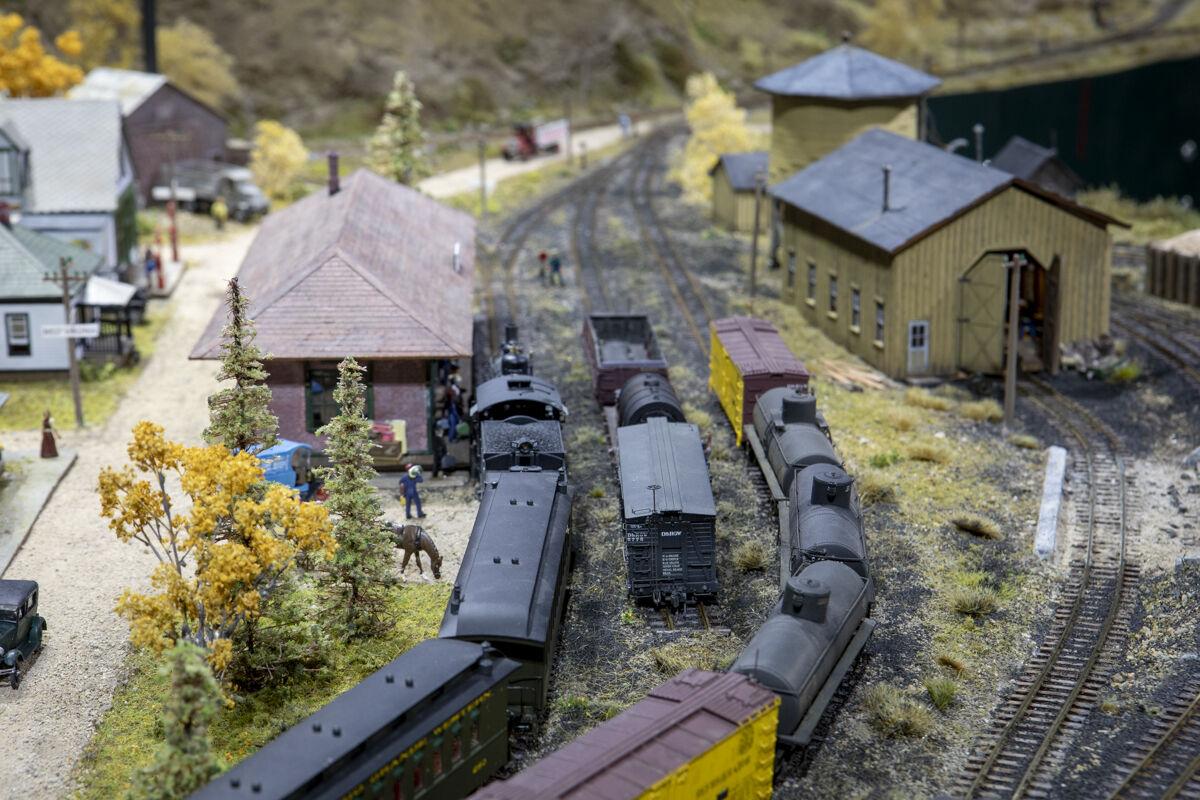 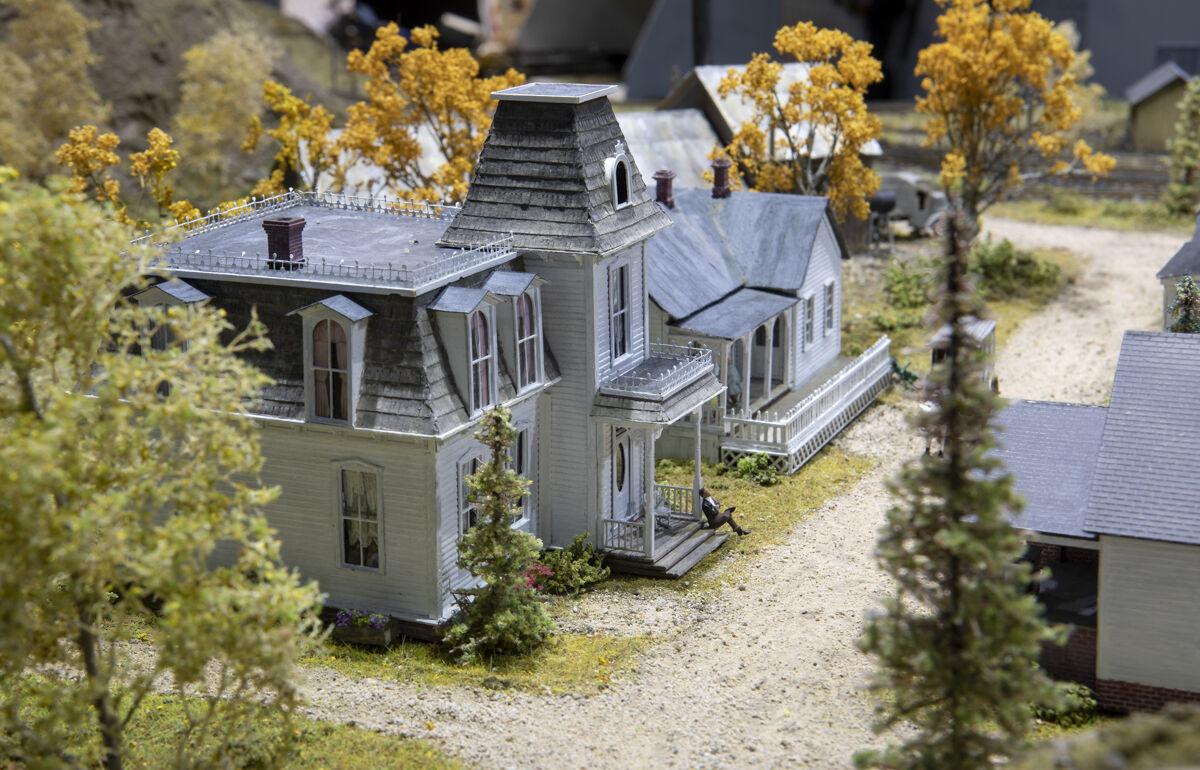 A man sits on the front steps of one of the houses on the outskirts of Gunnison. 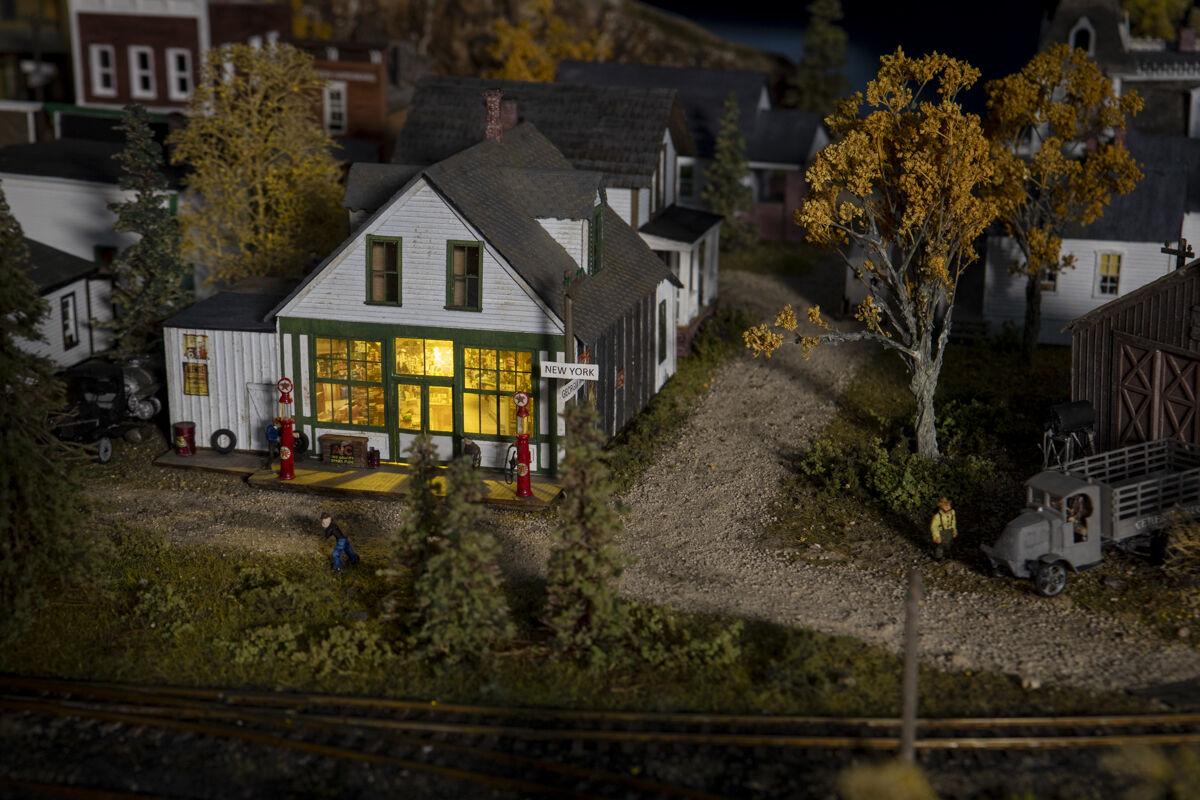 Nighttime scene of the merchandise store and service station in Gunnison. 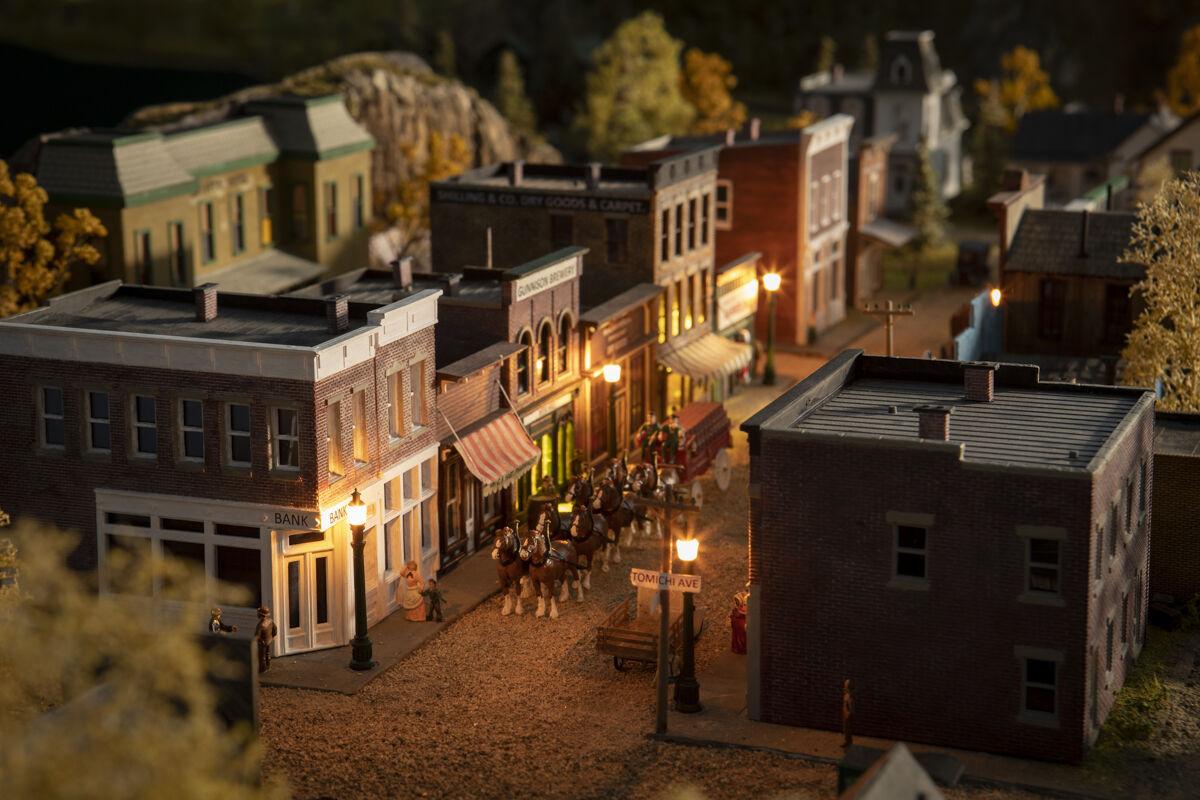 Nighttime along main street in Gunnison. 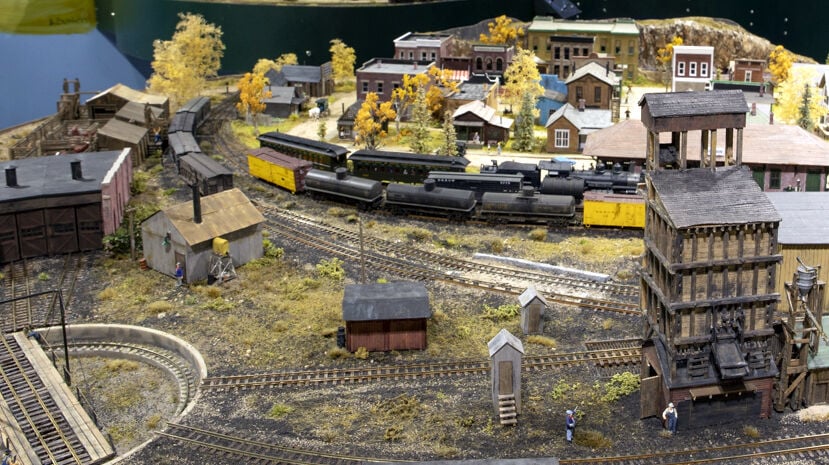 Gunnison rail yards with roundhouse and engine turntable on the left. 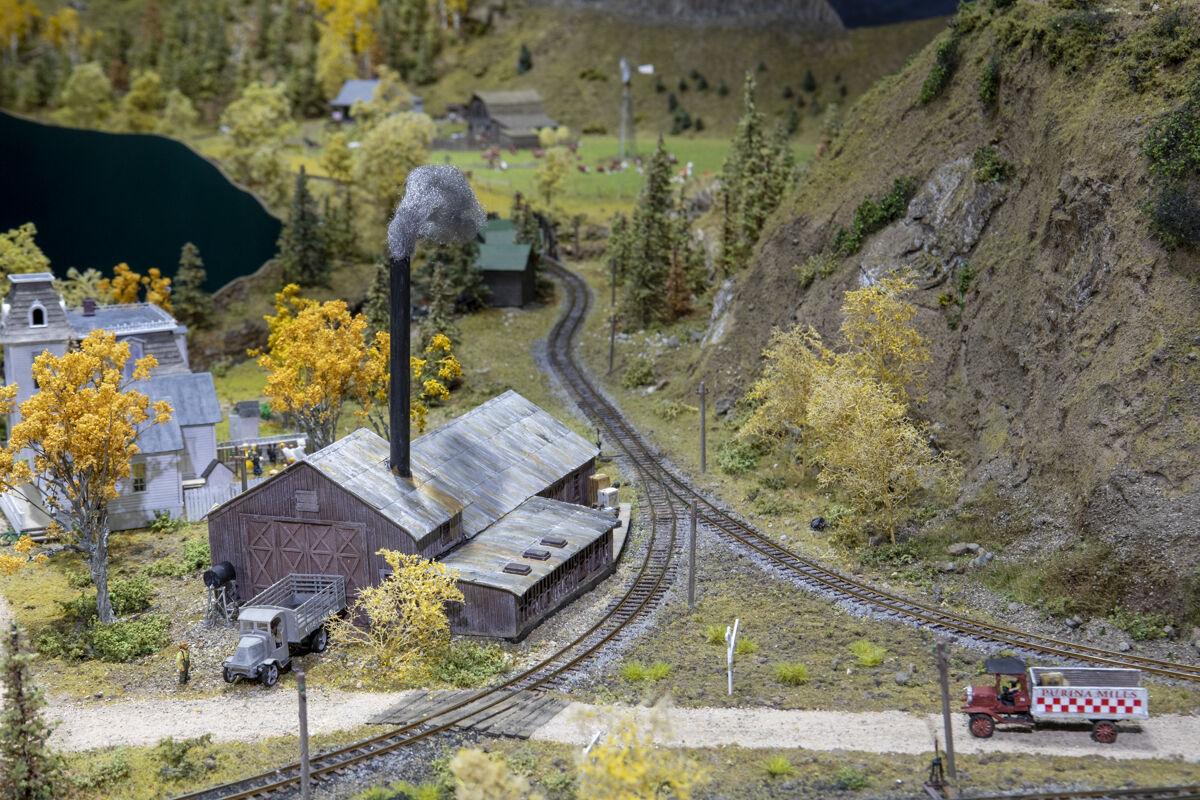 A factory billows black smoke along the tracks leading from Gunnison. 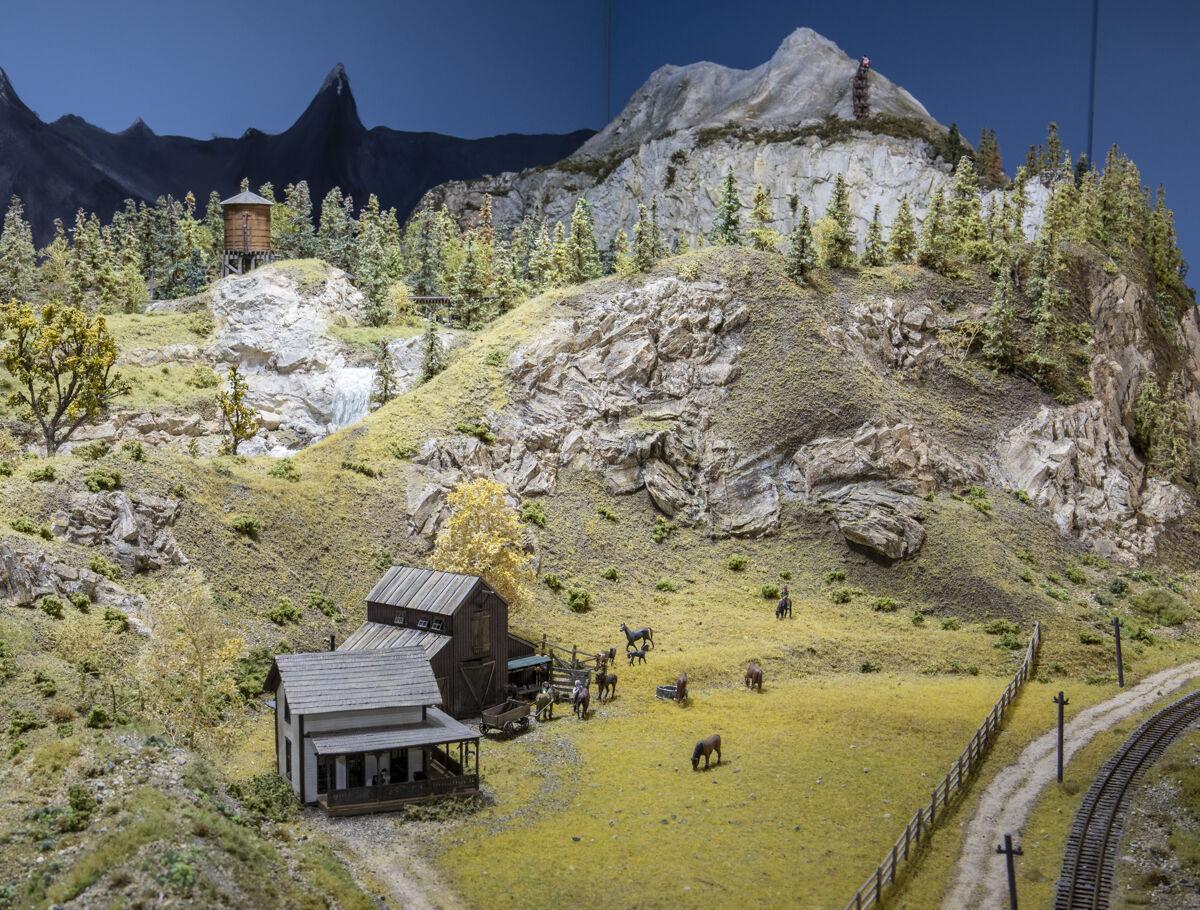 A small ranch beside the tracks from Gunnison toward the mountain in the background. 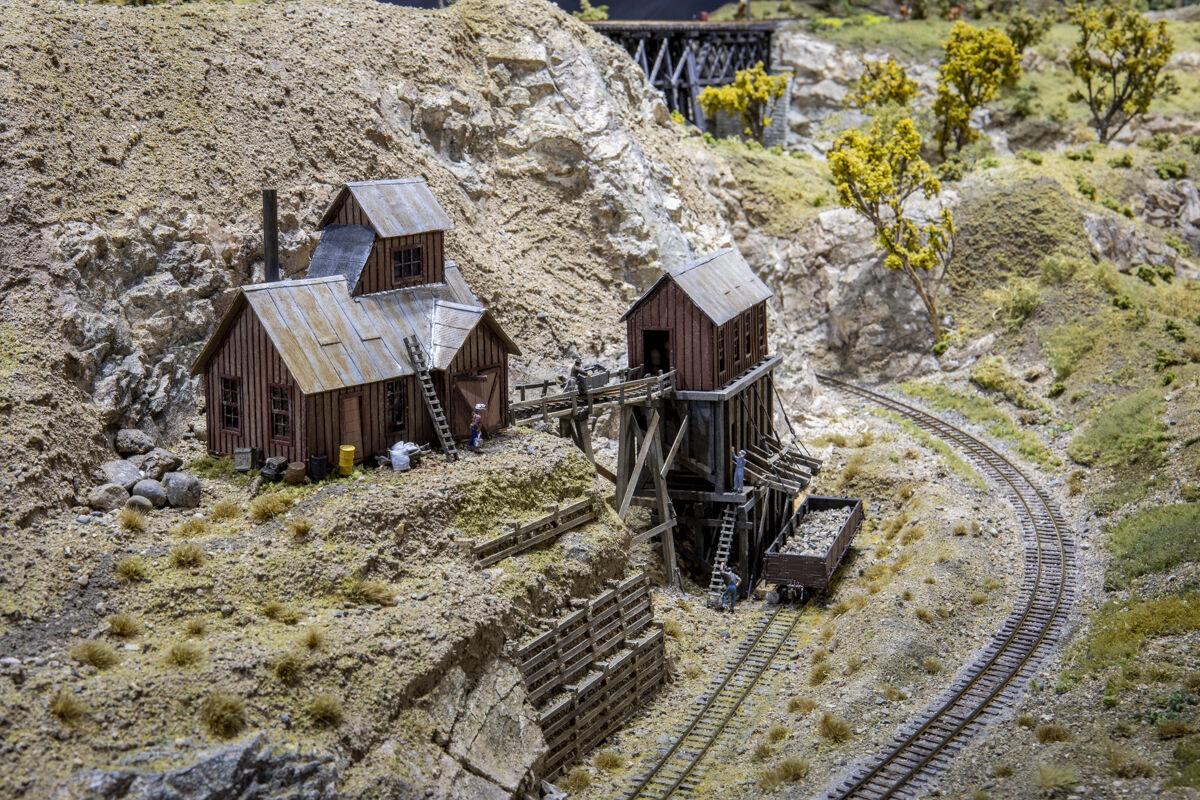 A mining operation sits beside the tracks. 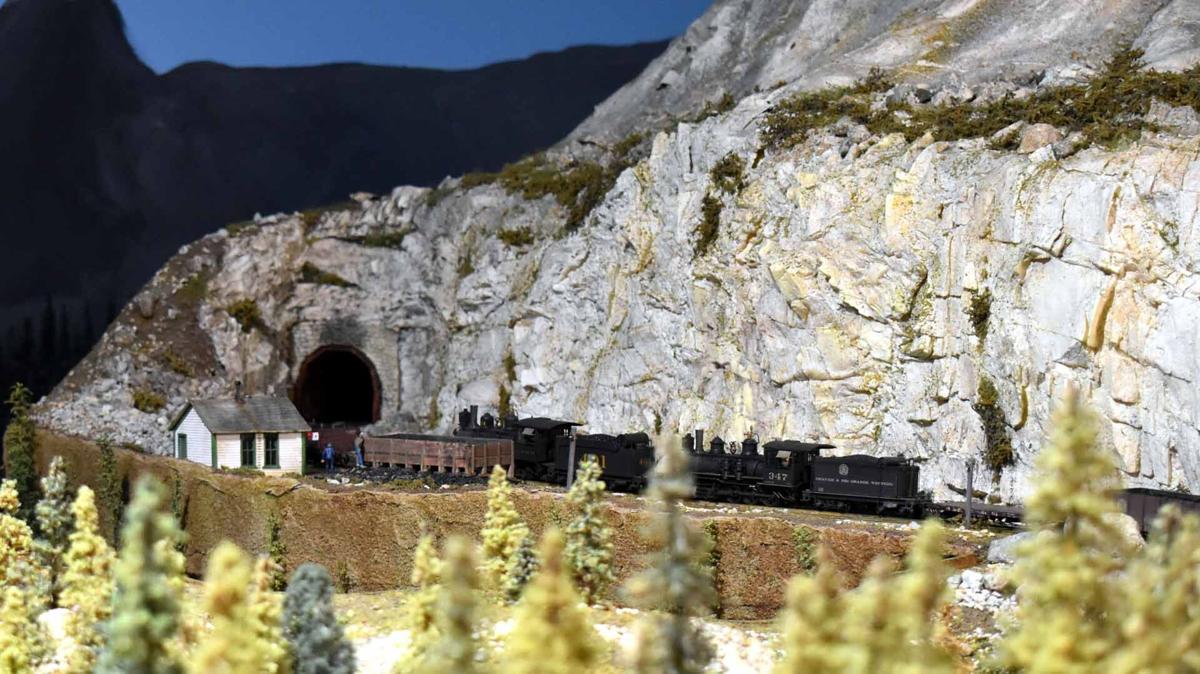 Coupled engines struggle up the incline towards the highest mountain tunnel in North America.

If you live in Big Canoe you have a love for our mountains.  However, there is at least one of our residents who also loves the big mountains to the west -- the Rocky Mountains and the high peaks west of Denver, Colo.  Lee Schalon was a Naval aviator and later a Delta pilot, retiring as a Captain after 32 years with the airline.  After retirement he and his wife Sis moved to Big Canoe in 2006.  Before moving to Big Canoe Lee and Sis had a second home in the mountains of Colorado and fell in love with the area, the skiing it offered and the historic old towns and railroads.

“I received a Lionel train set when I was eight years old and after retirement decided to get back into model railroading and build a layout representing the Colorado area that we loved.  It took me about 10 years to complete the layout, and I just finished it about a year ago,” said Lee.  “It is patterned after the narrow-gauge railroads servicing the mining and ranching areas in Gunnison and Crested Butte,” he continued.

Everything on the layout is realistic and accurate to the HOn3 scale. HOn3 is about the same scale as HO (which is 1/87 scale) except that the tracks are narrower to represent the narrow-gauge railroads used in the mountains of Colorado. “The layout is representative of the 1910 – 29 eras when automobiles were being introduced to the area but horses still predominated for personal travel,” said Lee. “All buildings and structures in Crested Butte are protected by laws that preserve them, so the town today looks like it did in the early part of the last century,” he stated.

In the overview photo, the town of Gunnison is shown in the foreground with the town of Crested Butte about 30 miles down the valley on the far side. “Some of the structures are made from kits but probably 60 percent are from scratch,” Lee said.  Building from scratch involves working from photos or imagination to create buildings or scenery starting with raw materials.  “I had help from more knowledgeable railroad hobby friends who offered me sage advice over the past 10 years,” said Lee.  “But I think I actually enjoyed the building experience more than the actual operations,” he continued.  When asked what was next, he replied that “I would like to get some more efficient electrical equipment and some decoder additions for my engines.”  Decoders are small, printed circuit boards in the engines and tenders that control the engine functions such as speed and sound.

On the outskirts of Crested Butte is a coal mining operation, with coal sliding down a chute from the mine into a building sitting over three track sidings. Coal can be dumped directly into the coal hoppers lined up under the building.  Engine 348 is backing up to pick up three coal hoppers sitting under the building. A water tank looms over the inside track to pour water into the steam engine tanks. The steam boiler uses coal to heat the water in the large pressure tank on the front of the engine to create steam that drives the three large wheels on each side.

At the railroad crossing at the edge of Crested Butte a horse drawn wagon waits to cross the track.   The town church is located by the side of the gravel road leading into town.  Crested Butte is definitely a one-horse town – or perhaps at least a two-horse town!

“The town of Crested Butte is a replica of what the town looks like today. Because of space I had to condense the town to a few streets, but the main street is replicated as much as possible to show how it looked then as well as now,” said Lee.  The scenic mountains of Colorado are framed in the background.

As the train leaves Crested Butte passengers on the train see an unusual sight out of the window. Above them in the woods a hunter taking a break is about to receive the surprise of his life as a black bear approaches his exposed rear side

About halfway along the railroad between Crested Butte and Gunnison a rancher is leaving on a one-horse wagon as his horses and cows graze in the pastures behind him.

Ranching in this region consists mainly of raising cattle because of a lack of flat land for tiling and growing crops.

Lee stands behind his handiwork of the town of Gunnison, holding one of his DCC (Digital Command Control) hand-held controllers.  “With the DCC controller I can control all of the engines, including their sounds, direction and speed,” said Lee.  Behind Lee is the town of Crested Butte, which in real Colorado distance is about 30 miles away.

The railroad winds behind Gunnison, with sidings at the edge of town for the train depot and to service the cattle pens along the siding.   Passenger cars are lined along the passenger depot on the edge of town along with box and tank cars parked on the other sidings. A tan-colored engine barn is located on the other side of the tracks from the depot so that servicing or repair of engines can be conducted inside.

Houses on the edge of town are neat and well kept.  “I copied the design of the town buildings from photos to make them as realistic as possible,” said Lee. Looking at the buildings up close they look like the real thing, even to the man sitting on the front steps.

At night Gunnison lights up in the houses and stores, but most of the streets do not have lighting. The service station and general store sit not too far from the tracks, but there is little activity on the streets except for a man sitting in front of the store and a bearded man walking across the street.

Nighttime along main street is a little busier with women and children walking on the sidewalks and an eight-horse beer wagon parked in front of the Gunnison Brewery.  This looks like the Clydesdale team with the Budweiser wagon. “This street scene replicates the appearance of Gunnison’s main street in the past as well as the present,” emphasized Lee.

As the railroad leaves Gunnison on the way up the valley there is a factory beside the tracks with smoke billowing out of the smokestack.  An early 1900s take truck sits in front of the factory while a Purina Mills truck approaches the track on the gravel road.

Along the tracks from Gunnison towards the mountains is another ranch with grazing horses. The rancher tends to chores in the barnyard. The railroad continues up the mountain on its way to Altman Pass in the background.

Continuing up the mountain the railroad passes a mine perched on the side of the mountain, with a siding where railroad hoppers can be loaded for transport.

Two coupled engines operate together to pull the load of cars up the incline as they approach the tunnel. “This tunnel at Altman Pass is at an altitude of 11,940 feet and is the highest railroad tunnel in North America,” said Lee. “The tunnel was closed in 1910 but the site can be seen today as a reward to a long hike,” he stated.   Lee hiked throughout these mountains when they had their home nearby.

As the train winds down the opposite side of the mountain from the tunnel we take leave of Lee Schalon’s outstanding historic Rocky Mountain narrow gauge railroad.  This recreation of the past provides a close look at life as it existed over a century ago.

A video of the layout is provided below.