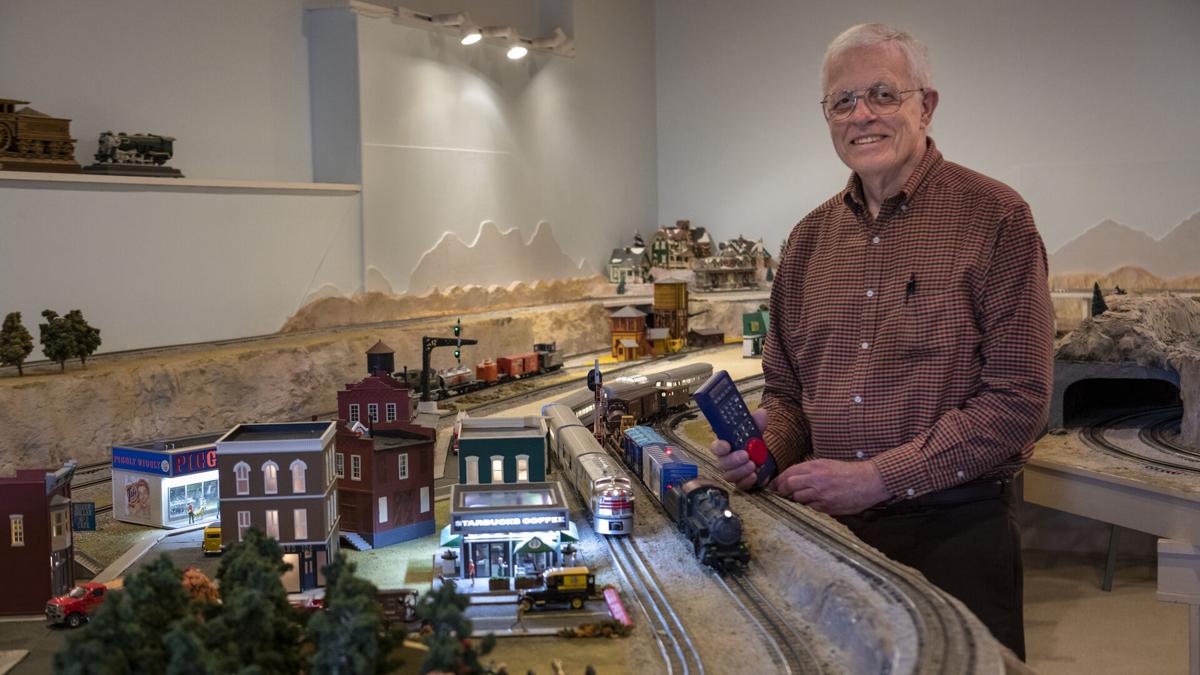 The layout has a town in the center of the left side as the two tracks curve around town to head back. 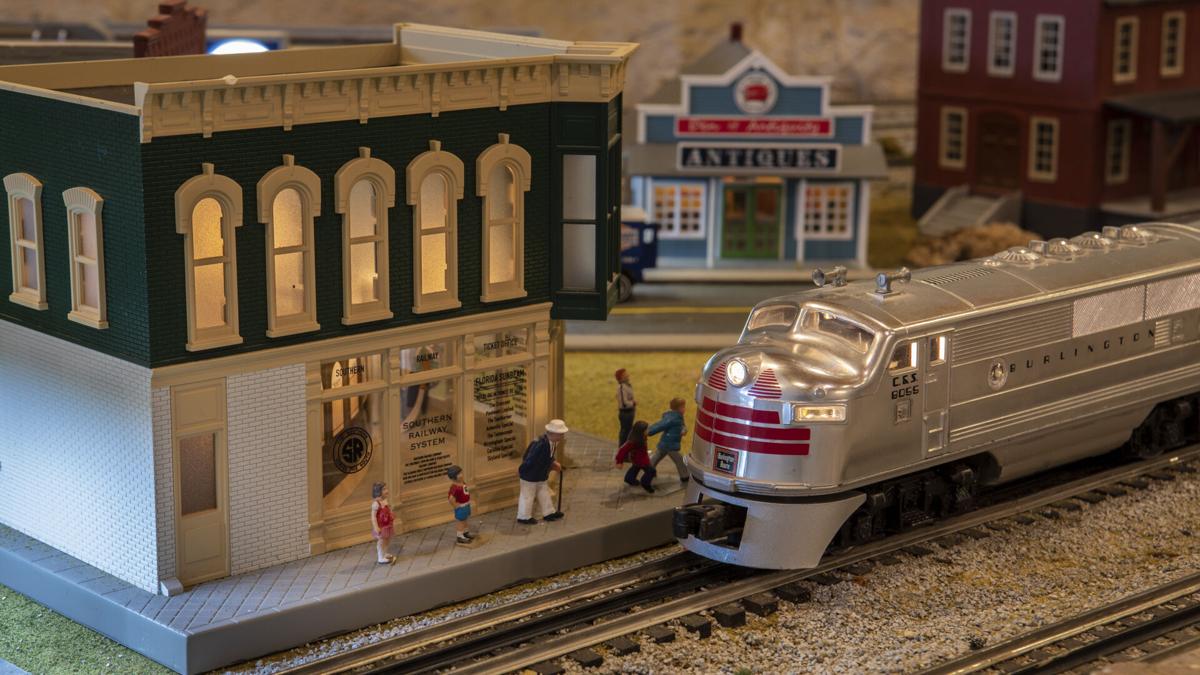 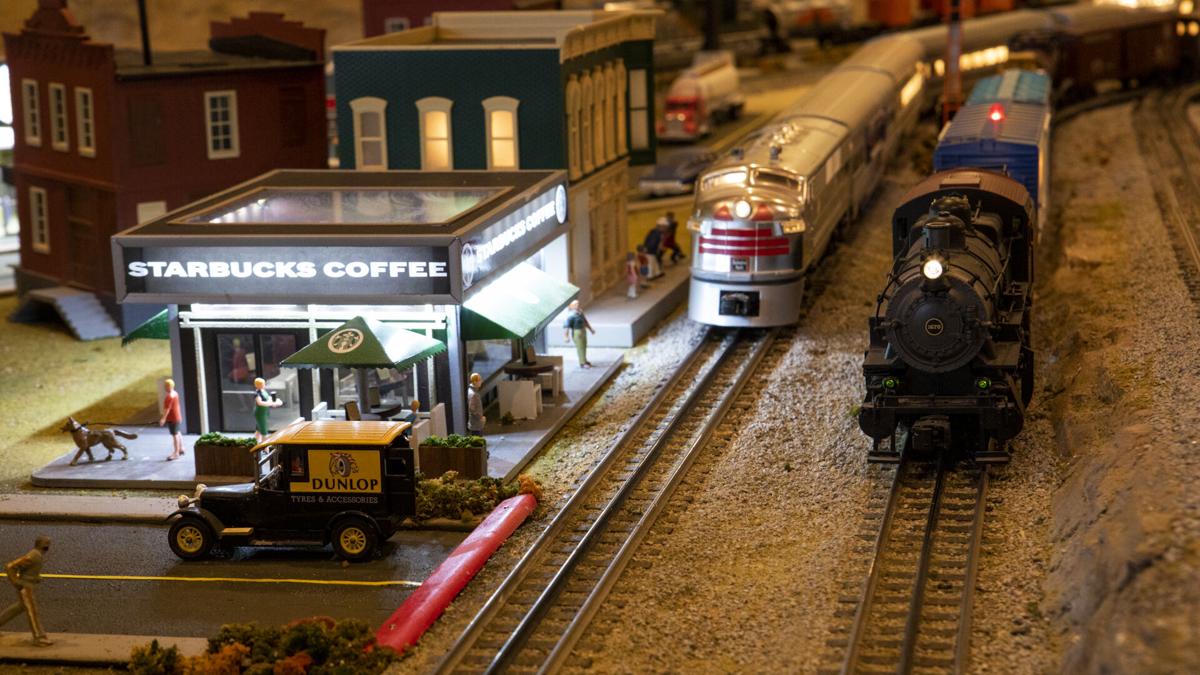 The passenger and freight trains pass the passenger station and Starbucks Coffee shop as they head to the end of town. 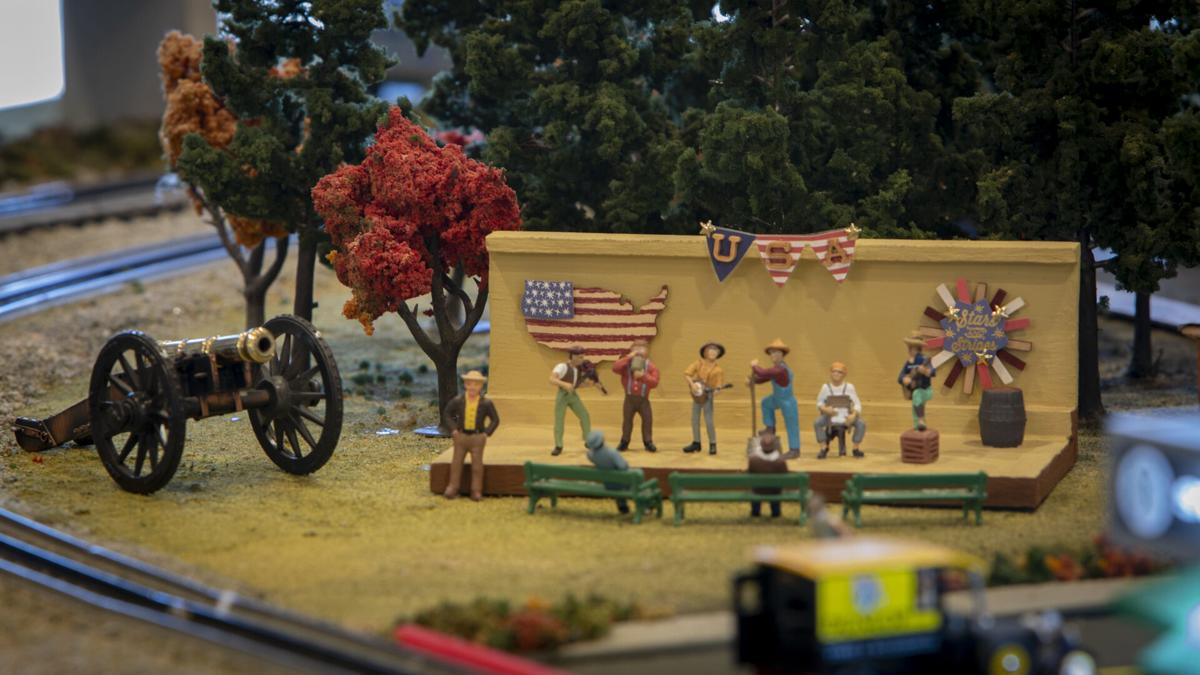 The town park sitting beside the inner loop track features a country and western band just starting their routine for the afternoon performance. 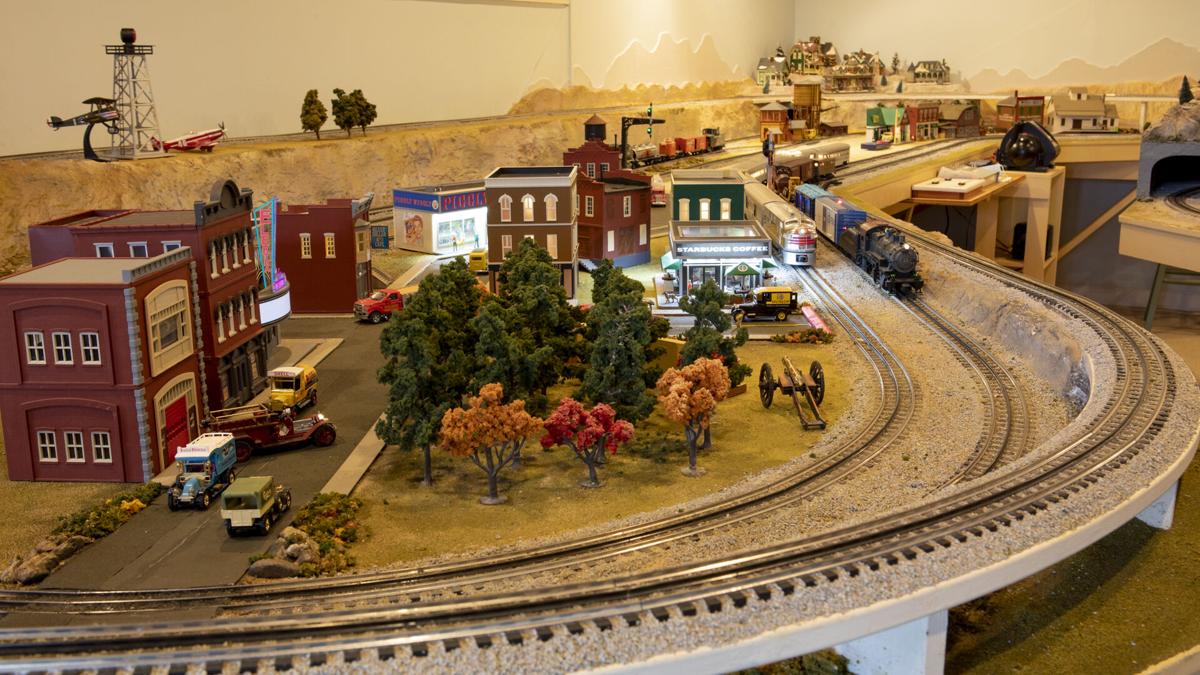 The inner and outer loops curve around the end of town, with the park on the right and fire station at the end of the street. 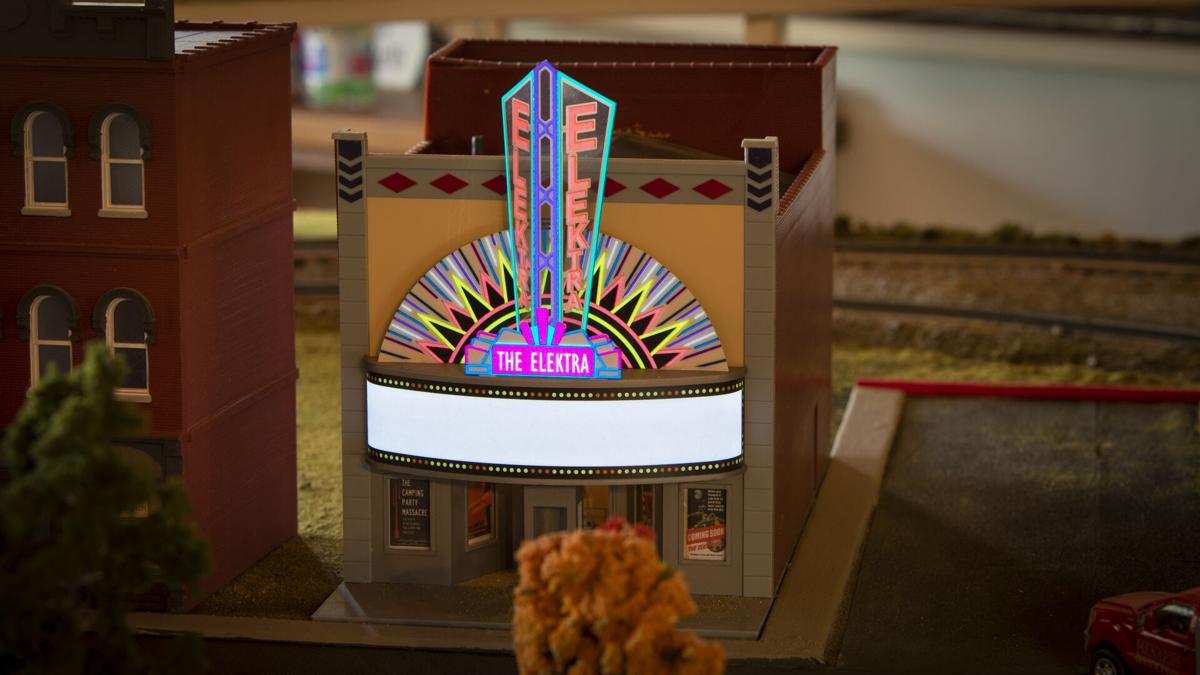 The Elektra theater is all lit for the evening show. 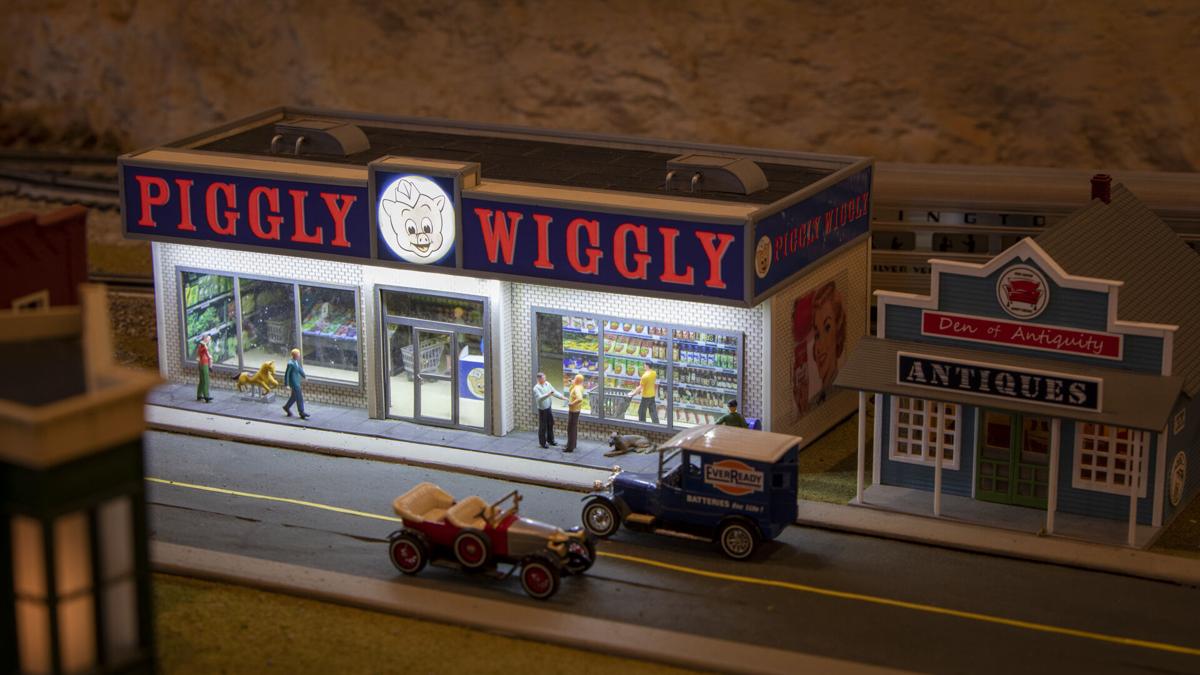 The Piggly Wiggly store is just down the street from the fire station and is lit up for the early evening. 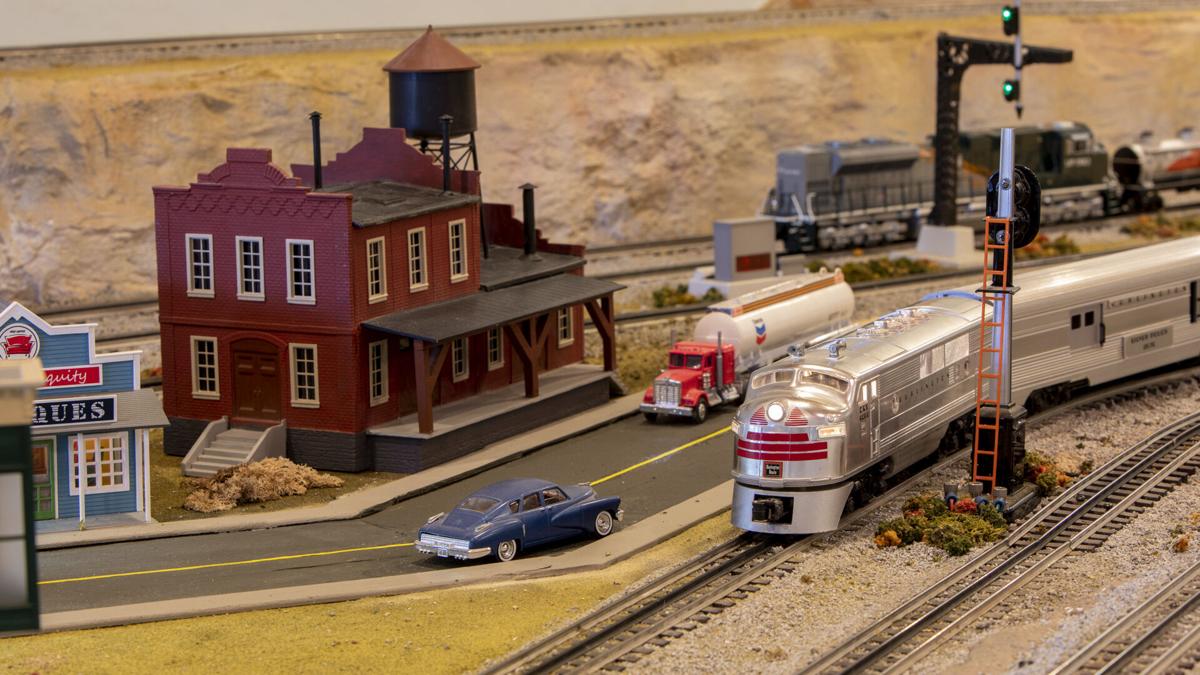 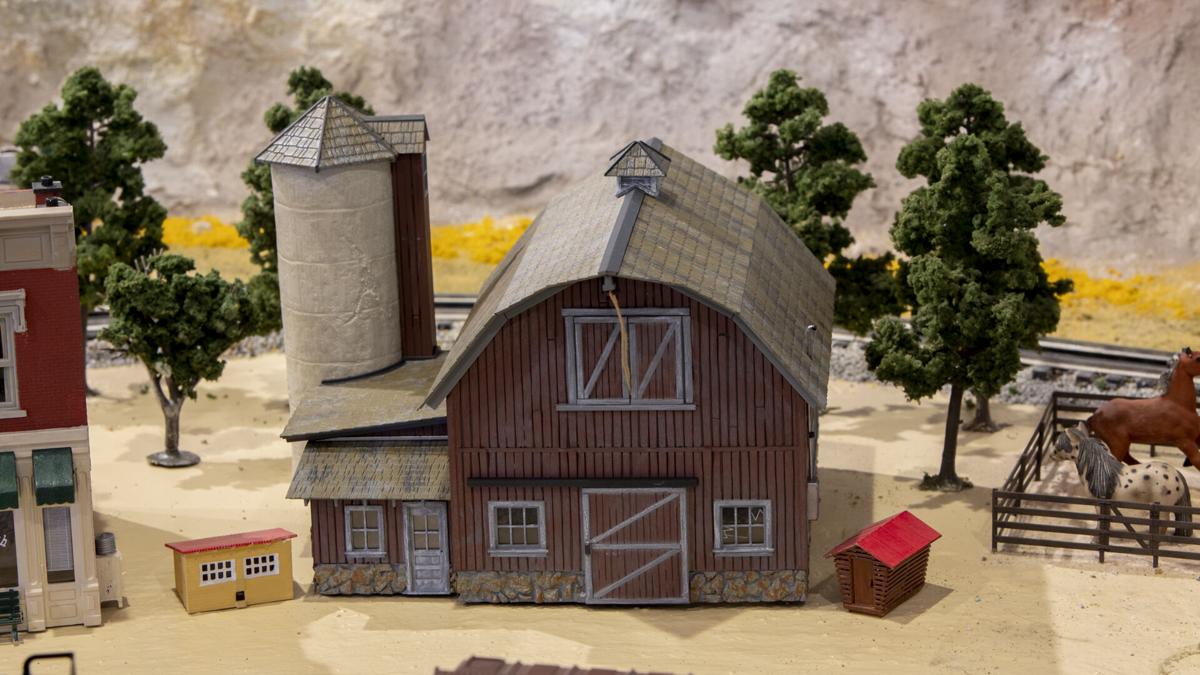 Horses stand in the corral between the barn and the blacksmith shop. 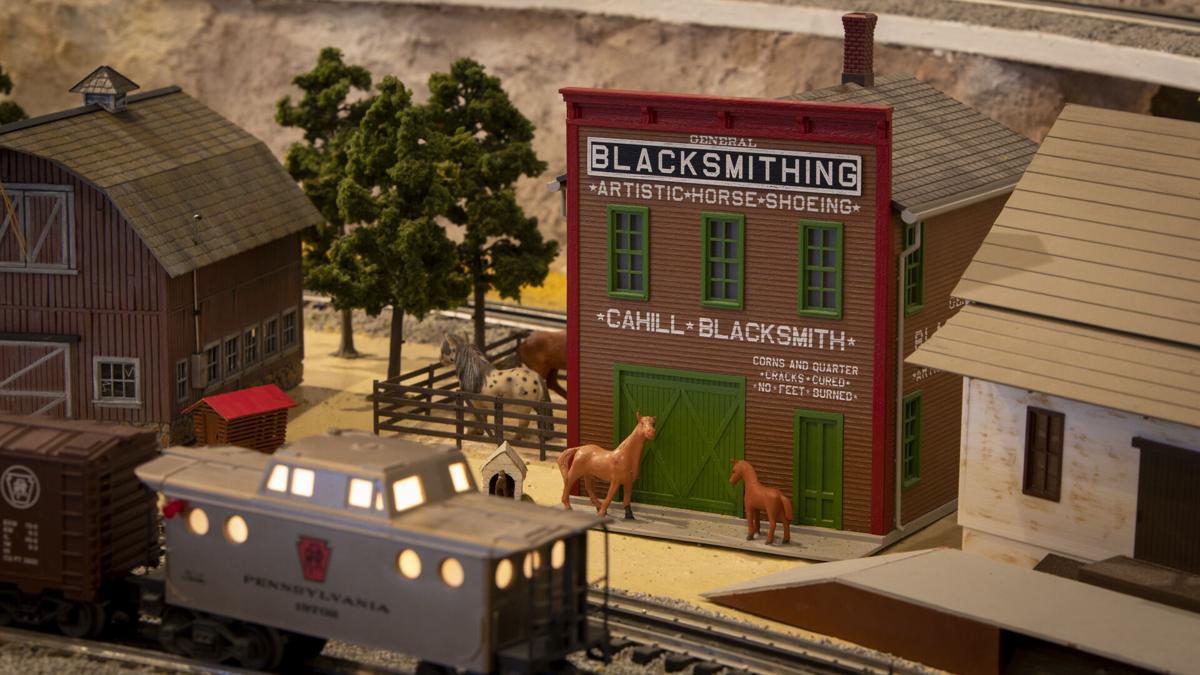 Horses stand in front of the Cahill Blacksmith shop waiting for their turn to receive new shoes as they watch the freight train caboose pass by. 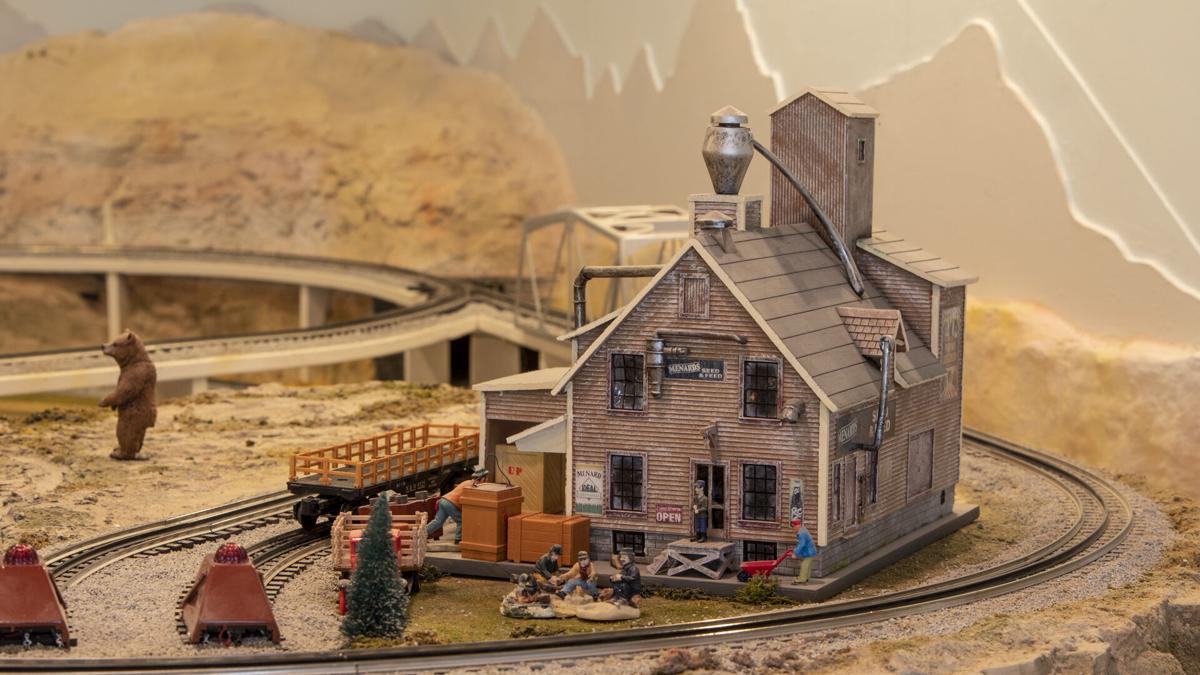 A bear stands guard outside the Menards Seed and Feed store located inside the elevated siding. 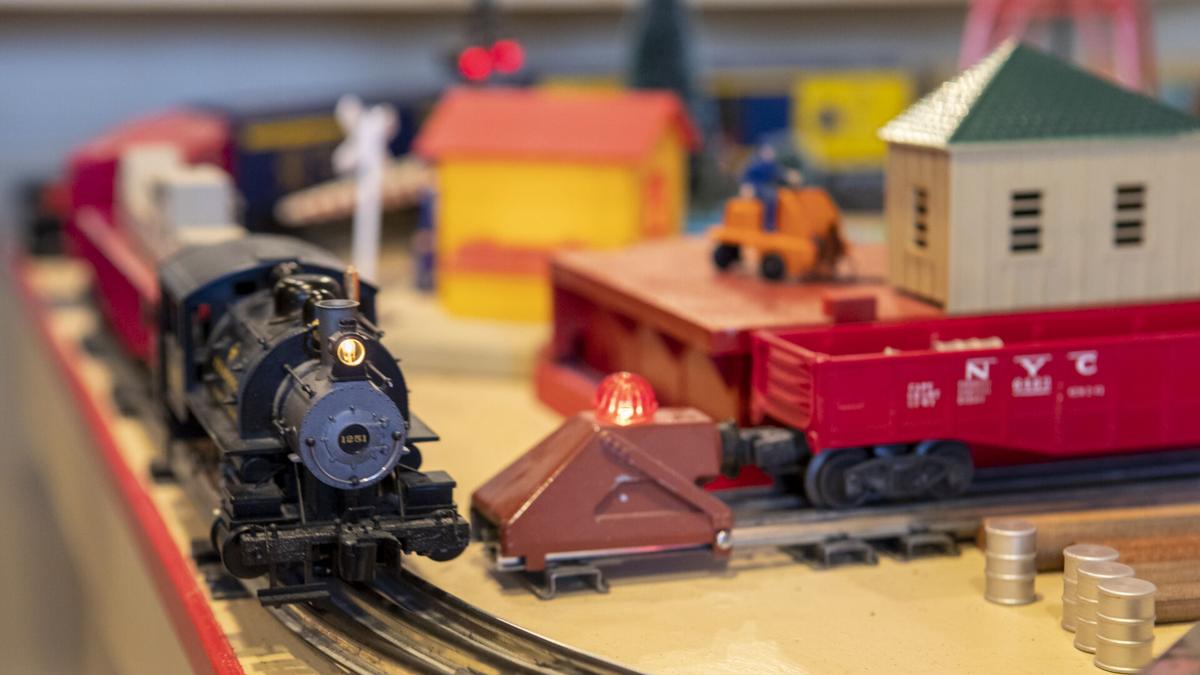 A steam engine powered freight train passes the barrel loader and a gondola sitting on the siding ready to receive barrels dumped in by the forklift. 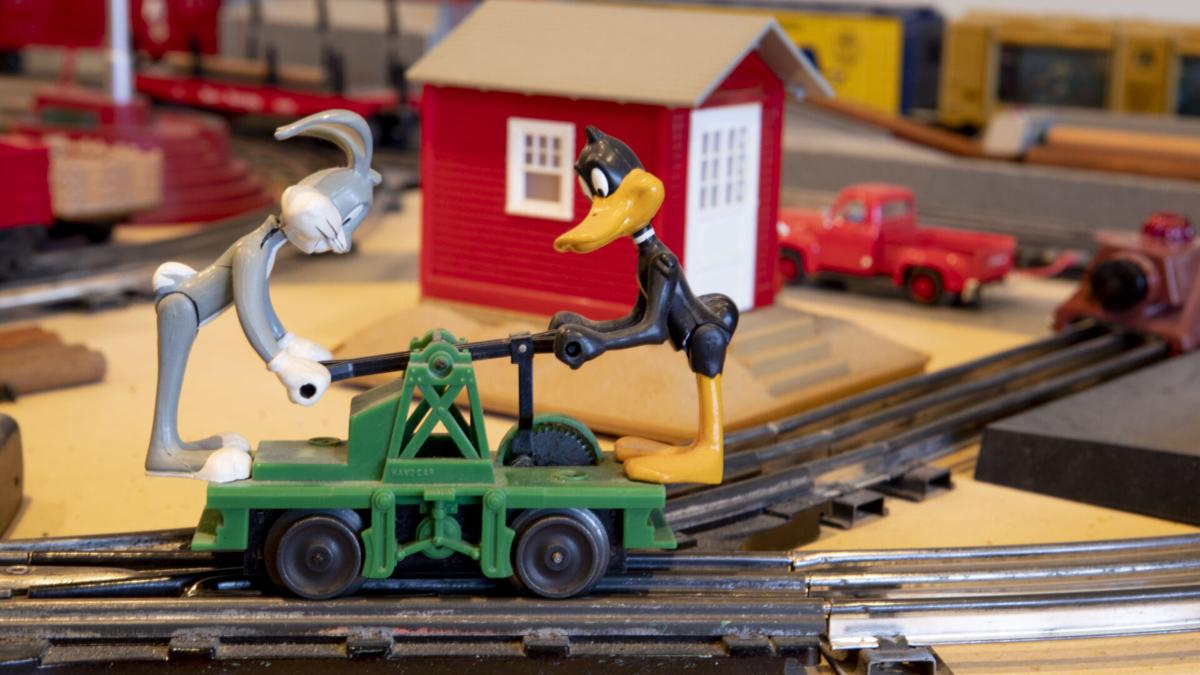 Bugs Bunny and Daffy Duck pump away on the hand cart as it runs around the track.

Jim Long retired the first time in 1969 when he was discharged after serving as a staff officer  assigned to a Hawk battalion in Schweinfurt, Germany for 18 months. After leaving the service he joined the Department of Housing & Urban Development and held a number of staff and management positions until he retired in 1997 with almost 31 years of total service.

Jim follows in the tradition of model railroaders who received trains when they were young.  “I received a Lionel Scout train set for Christmas when I was about six.  The next year I received an American Flyer train set that was, as I remember a Silver Bullet set,” said Jim.  “That started me off, but little happened until the early 1980s when I purchased a Lionel steam set and built several Lionel layouts while living in Gwinnett County,” he remembers.

“My wife Pat and I moved to Big Canoe in 2000 following construction of our home and soon started finishing out the train room. I had no interest in modeling early railroading of the 1800s, nor modern trains like Amtrack or the Aerotrain,” Jim said.  “The overall emphasis became the 1950s and 60s.  I didn’t make any attempt to model any particular community or region,” he continued.  “My family had no connection with railroading where I grew up in Jacksonville, Florida, but I remember seeing a lot of trains pass through the city because it was a rail hub along the east coast,” said Jim. “The basic layout is the same as seen today with approximately 270 feet of O gauge track. However, there have been many changes, additions and deletions made over the past two decades, which to me is just part of the fun,” he continued.

The layout is in the shape of a long U with tracks on both sides against the walls.  “In front of the layout on the right side is what I call the kiddie layout, which is an oval track with several accessories that the grandkids can operate,” Jim said.

The ‘big peoples’ layout starts with a large, curved section of inner and outer loop track around the town.  There are both ground-level and elevated-level tracks.  The elevated level is a siding that switches off the outer loop track and goes up an incline and then to the back of the layout. It continues by making a loop around Menards Seed and Feed on the right side of the layout before heading back.

Jim controls the layout with a Lionel Trainmaster handheld remote. “The remote is connected to the MTH Z-4000 dual-channel transformer through a Trainmaster Command Control box so I can vary speed and sound functions by addressing the train number,” said Jim.  “This lets me control the trains and engine sounds from anywhere in the room. The town in front of me has a small park and several buildings. Some of the buildings are from Menards and include inside and outside lighting to provide a realistic nighttime look,” Jim added.

A Lionel Burlington Route Zephyr diesel passenger train approaches the hotel and Southern passenger station on the inner loop track as passengers wait to board. The ticket office and waiting room on the entry level were part of the Southern Railway System, now a part of the Norfolk Southern Railway.  Several children and an elderly man wearing a straw hat eagerly await the trains arrival.

The Menards Starbucks Coffee shop sits by the tracks as a Lionel Burlington Zephyr diesel passenger train approaches on the inner loop track. On the outer loop a Lionel 0-6-0 steam engine with Pennsy markings powers a freight train passing the hotel, a passenger depot and Starbucks. “The Zephyr engine is a conventional engine that operates by varying track power, while the steam engine is a newer engine with Trainmaster controls and sounds,” said Jim.

Just down the street from Starbucks is the town park, complete with a civil war cannon and bandstand, which today features a country western band and singers.   It’s a slow day for the band since there are only three in the audience, but maybe it’s still early.

The main street runs behind the park to cross the railroad tracks at the end.  The fire station across the street from the park now has a fire engine backing into the station.  Down the street is the Elektra theater and Piggly Wiggly store.  “I located the airport above the town to give it perspective, and also because it doesn’t have to change much since it’s in a difficult to reach location” said Jim.

The Elektra theater is conveniently located across the street from the park, allowing people to take a walk in the park after attending the theater.  “There isn’t anything showing on the marque so that’s something I need to do to be able to tell what’s showing. I’m thinking about the movie ‘Titanic’, but we shall see,” pondered Jim.

The Burlington Route Zephyr passenger train enters the town, passing by a 1948 Tucker automobile and Chevron tank truck on the road.  “The brick factory across the road is one of the kit buildings I’ve built in the past few years as I’ve rebuilt the layout,” said Jim.  A Lionel SD70 diesel engine sits on a siding on the other side of the layout.

“I’ve made many changes, additions and deletions over the past two decades, which to me is just part of the fun because when it’s not finished there is more to do.  I currently have about 10 square feet of deliberately left empty space for future inspirations,” Jim stated.  “Most of this area was previously devoted to Lionel action accessories that are mostly retired now, but some have been placed on the ‘kiddie layout’ for the enjoyment of the youngsters,” continued Jim.  At the end of the empty section are several recently added buildings, including a barn that is part of the nearby Cahill Blacksmith shop.

At the far end of the layout the two main tracks wrap around to form a loop, passing through a tunnel at the end before heading back. The elevated siding continues around the outside of the layout to the loop on the right side before passing around Menards Seed and Feed store. Two sidings serve the store to deliver products to the store.  Three hobos sit around a fire warming themselves as others work around the store.  Everyone completely ignores the brown bear standing across the tracks.

Jim set up the Kiddie layout at the end of the main layout to provide a small layout where children can enjoy seeing and operating trains. The layout is low enough for the grandchildren and others to stand around it and operate the train and accessories. “The layout has a single-track looping around the outside.  Children can operate the steam engine with a conventional transformer,” Jim said.  “They can also operate the barrel and log loaders to quickly run them out of barrels and logs so they have to be reloaded, but that’s part of the fun. One of their favorites is the Bugs Bunny and Daffy Duck hand car that scoots around the track when they pump the handles,” he added.

When asked what he considered the most meaningful aspect of this hobby, Jim replied “Without a doubt, the greatest joy has come from visitors, young and old, who often express surprise and wonderment. They typically have only a vague knowledge of Lionel trains or O-scale model railroading. Pat and I have had well over 200 visitations during the past several decades.  Pat has been a great supporter and help mate throughout the past many years. The physical aspects of creation of the layout that requires a combination of skills and knowledge as well as the actual operation of the trains has been a great hobby and enjoyment in my retirement,” Jim concluded.

We thank Jim for sharing his ever-changing O-Scale layout with our readers.

The final article in this series will feature the On30 layout of Tom English.

Please click on the link below to see a video of Jim Long’s O-Scale layout in action.